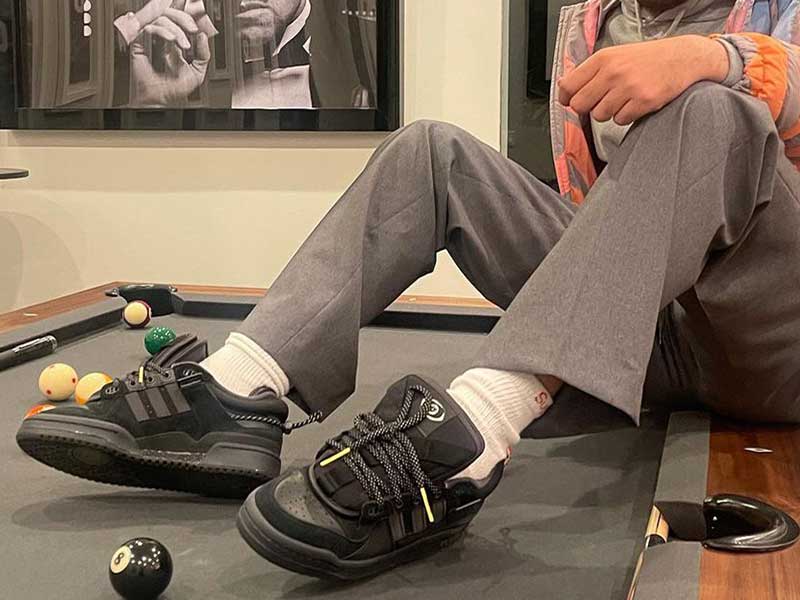 This new version of the Forum Low is the result of the third collaboration between the Puerto Rican singer and the brand with the three stripes. If you were paying attention during his WWE performance in mid-April, you would notice that he was already wearing this model. In addition, Janthony Oliveras —his creative consultant— has posted on Instagram some photos with the sneakers on, a fact that confirms the collaboration 100%.

In March, Adidas and Bad Bunny confirmed the rumors that were circulating about a possible collaboration with the release of the Forum Low in the shade “The First Café”.  But it didn’t stop there, because in April they unveiled a new iteration of the sneaker in pink “Easter Egg” and now, they have just announced that there will be a new pair that will be part of the Forum Low family. This time, the sneaker comes in black, so it’s much simpler, but still retains the usual details of the rest of Benito’s signature silhouettes.

The next fruit of the collaboration between the singer and Adidas stands out for its monochromatic upper, which combines leather and suede, and for the double tongues with Bad Bunny’s eye. In addition, as we can see in the images published by Janthony Oliveras, the laces have neon green details and the midsole remains faithful to the “total black” that prevails in the rest of the shoe.

The official release date has not yet been revealed, but we imagine that it will be made public in the coming weeks. We will be attentive to give you the news. For now, we only know that like the previous pairs, they will be sold for 160 dollars.

Desert Breeze and Color Block: new from Pull&Bear
Noah’s legacy for adidas continues
Personalize your beach bag with Pull&Bear
Dior opens a pop-up store in Ibiza for this summer
Jeremy Scott & Adidas partnership comes back this fall
Bad Bunny presents the video for his new single “Yonaguni”.
Mexico accuses Zara of cultural appropriation
Zalando hints at optimism in its new summer campaign
Pull&Bear takes inspiration from American soccer for ‘Half Time’ collection
Paco Rabanne presents its new capsule “Ciao Paco”
Whylout invites you to enjoy the juice of victory with its new T-shirt
Nike ACG moves to Hawaii for SS21