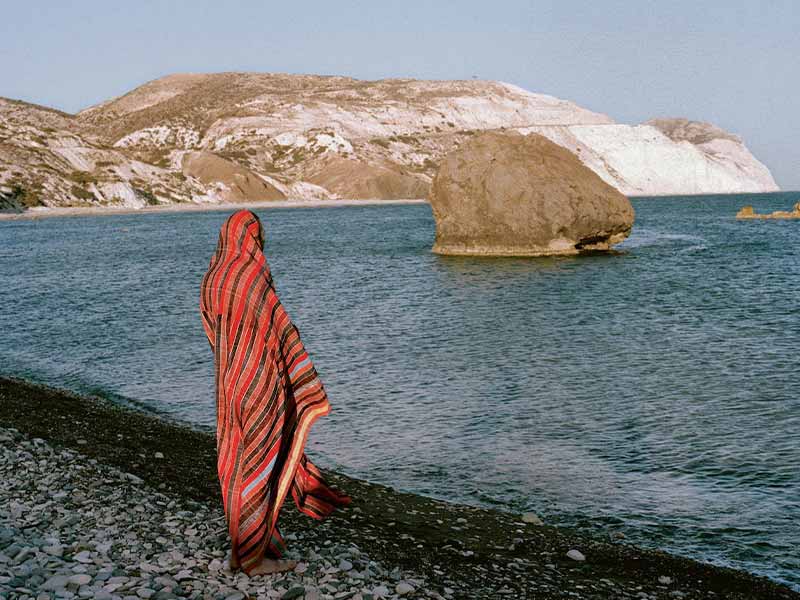 Camper launches issue 11 of The Walking Society by delving into the culture, landscapes and people of Cyprus; the third largest island in the Mediterranean. It has been the subject of invasions since the beginning of time due to its location at the gateway to the Middle East, in a strategic position as a link between East and West. Social turmoil and cultural stratification define its history and contribute to the island’s confused identity and mystical essence. 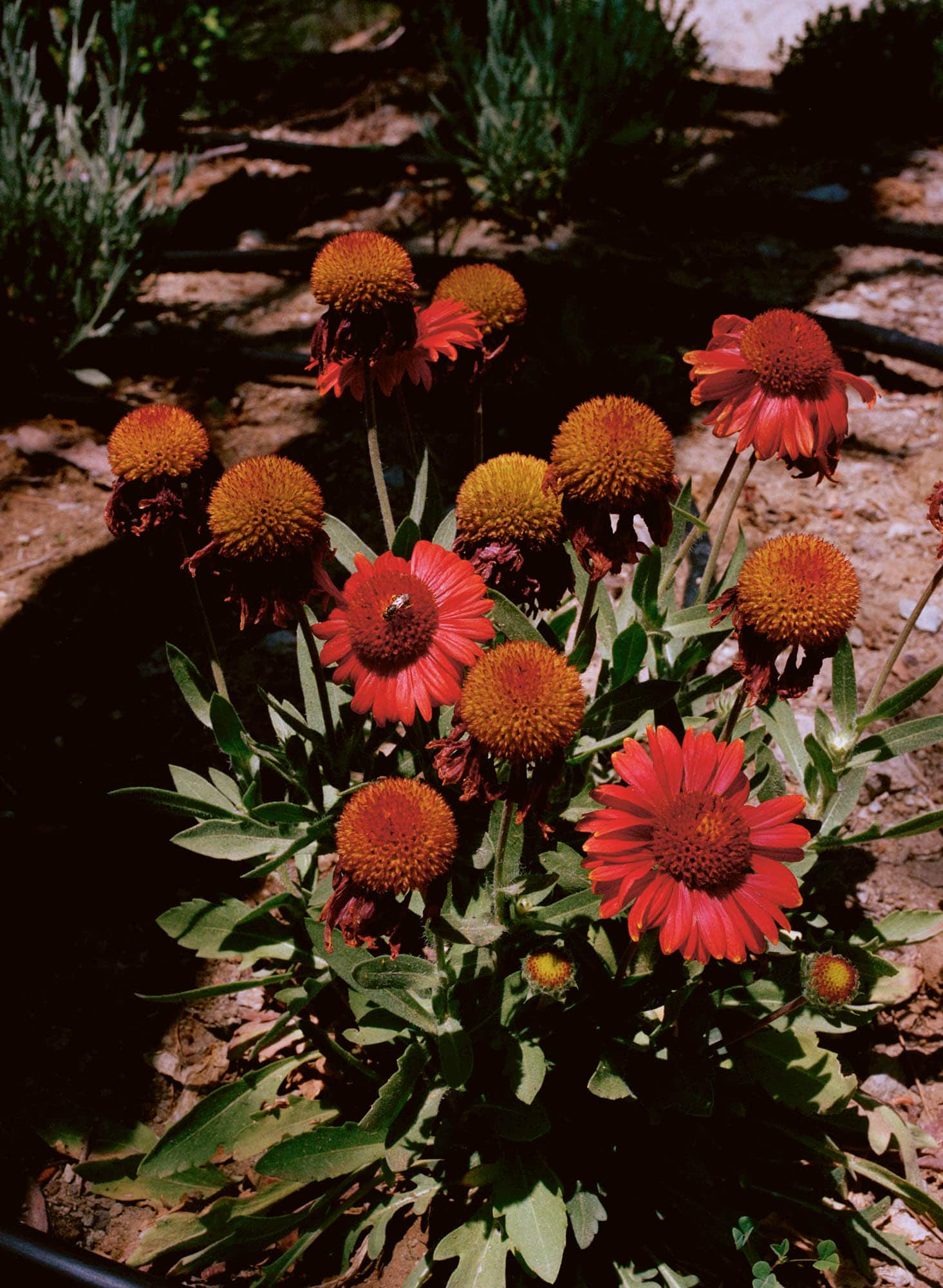 The island of Cyprus lies in the middle of the easternmost tip of the Mediterranean Sea. Its topography resembles other parts of the Mediterranean and mixes extensive vegetation with extensive olive groves in sun-dried fields. From the top of the hill on which the archaeological site of Kourion is located, one can look out over the sea and watch the colour palette of the surroundings intensify as the light fades.

The contrast of rural and urban areas, including the conflict between north and south, has moulded Cyprus into an unexpected place with an integral mix of people and landscapes that creates an enigmatic atmosphere that is difficult to replicate. 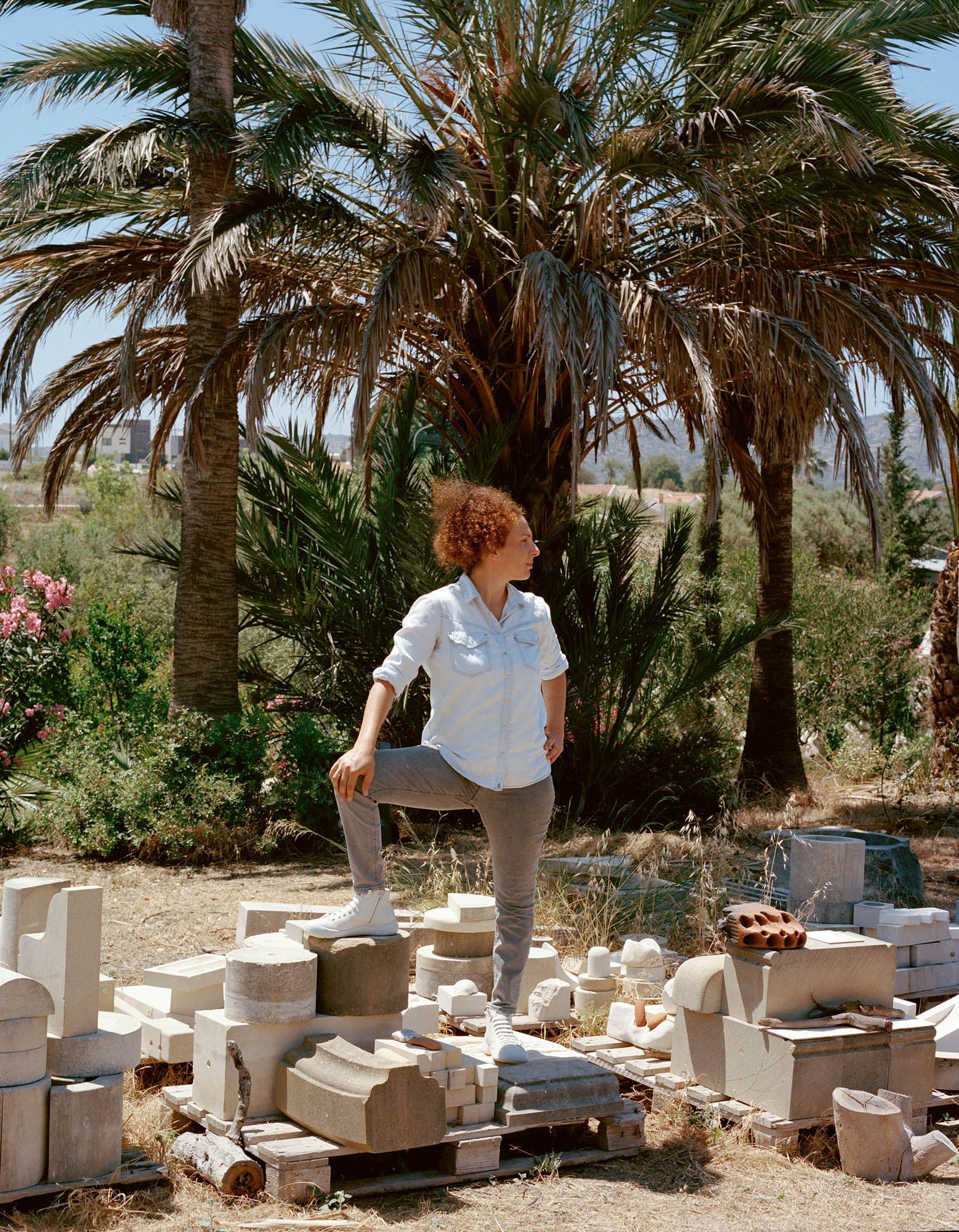 Elina Ioannou chose to use limestone, an indigenous material commonly used in construction, to interpret her surroundings by celebrating the local landscape through the manipulation of the mundane.

Working with her father, one of the few remaining stone sculptors on the island, Elina feels a strong connection to her Cypriot heritage and believes that studying abroad allowed her to see the way of life of her homeland from an unbiased perspective. 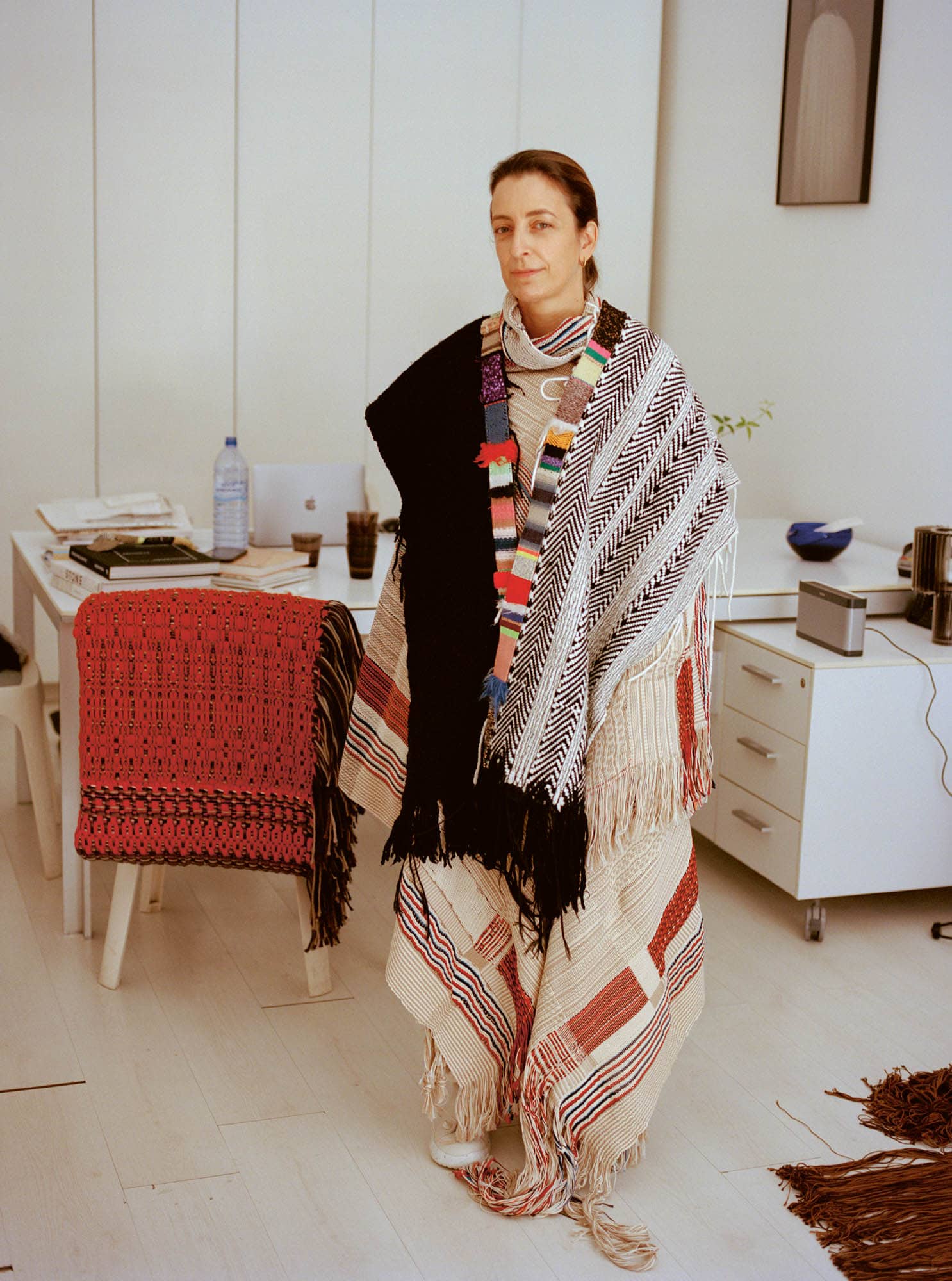 In the studio of Cypriot artist Joanna Louca, ancient weaving techniques are revived. Against a backdrop of linen bones, cotton and wool, loaded wooden looms wait silently; ready to spring into action and turn Joanna’s patterns into reality.

Joanna Louca‘s art is a bridge between tradition and the future. Experimenting with various materials, the artist aims to bring this ancient Cypriot tradition to the world through art exhibitions and commercial collaborations.

Closely linked to Fiti, a small village known for its embroidery tradition, Christina Skarpari uses her research and work to rediscover its heritage and connect with the rural communities that inhabit the island’s mountain villages.

Christina is interested in reconfiguring social narratives around hyper-capitalist systems and self-sustaining traditions. In 2013, she launched Xarkis Festival to mobilise and unite the diverse communities living on the island. 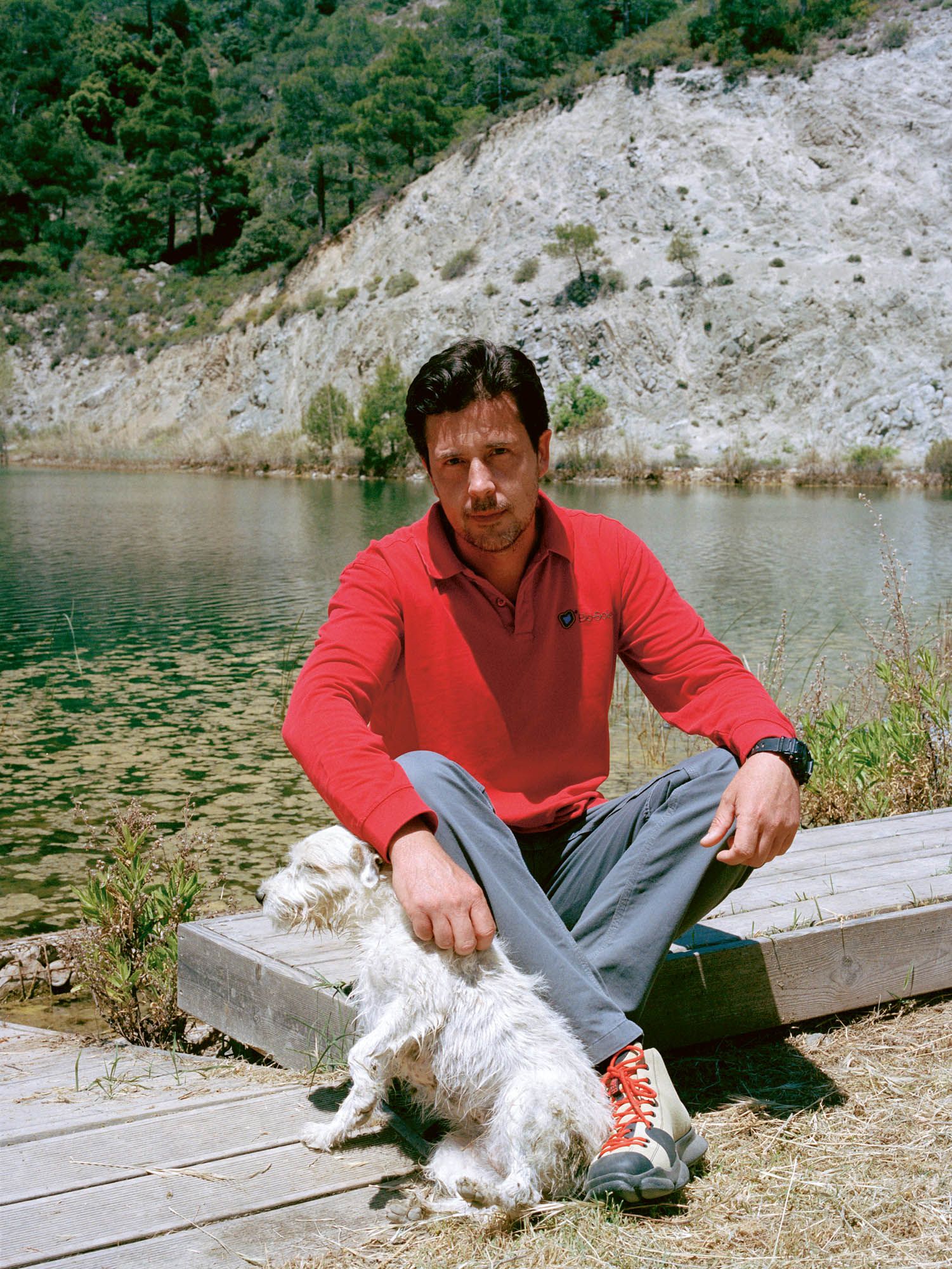 Bioengineer Nicolas Netien moved to Cyprus when he was called to work on a project in the UN demilitarised zone. Here he developed a special formula for growing the world’s healthiest olive trees following permaculture principles.

Working from the unbreakable bond that unites humans and nature in a place like Cyprus, Nicolas‘ annual project works with over-exploited land that has been damaged by poor environmental policies and climate change. 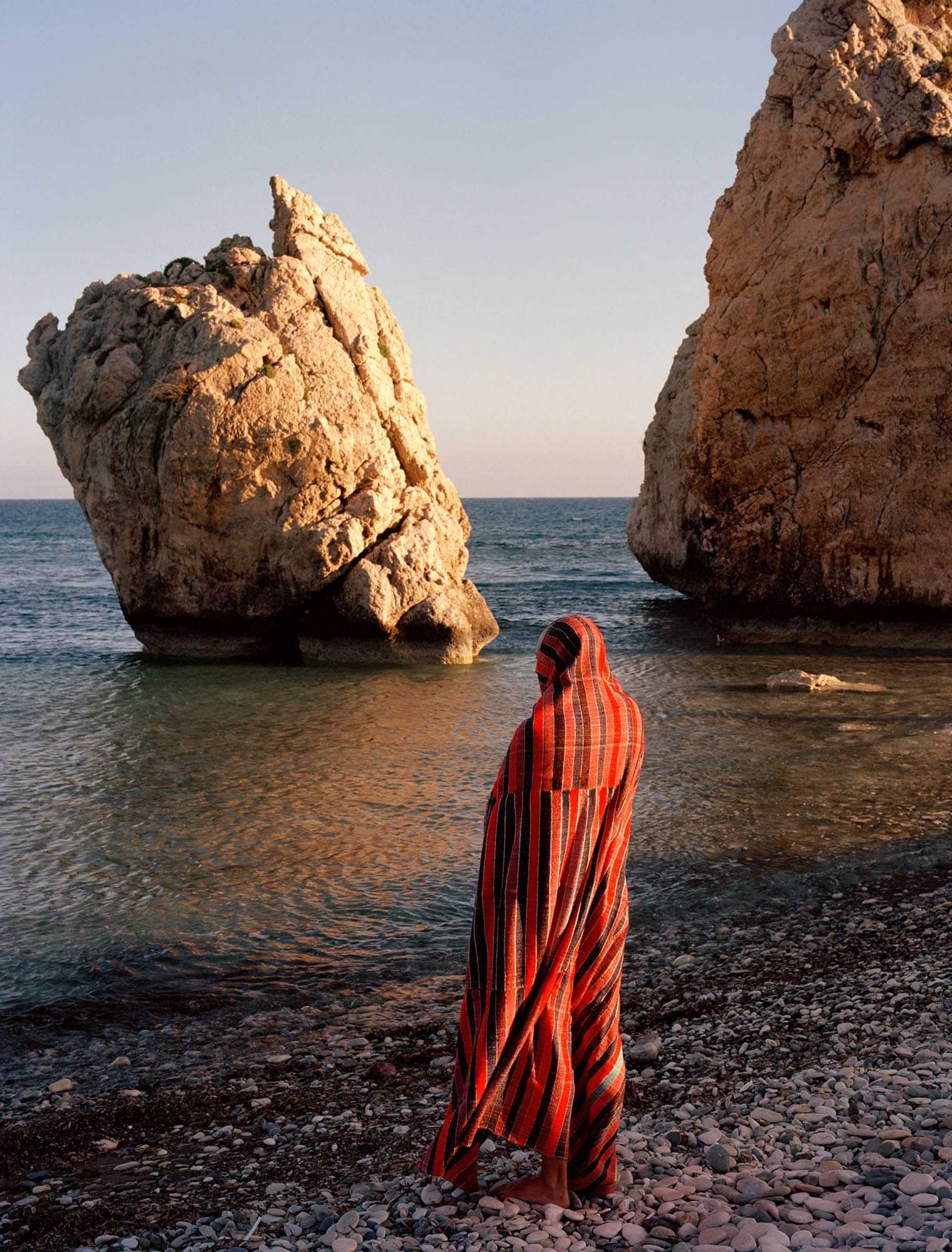 THE WALKING SOCIETY magazine collects the words and images of the characters and landscapes belonging to a group of people and ideas, sometimes restricted, sometimes very broad, that make the world change and progress. The first issue of TWS was published in 2001 with a theme based on the island of Mallorca, Camper‘s birthplace. The original series covered different regions of the Mediterranean and ran for four years, publishing eight issues before ending in 2005.

Issue eleven is a study and journey to discover an island with an intriguing chronology and complex archaeology. This journey questions and solves the mysteries of Cyprus and explores how the island has absorbed the influences of its foreign invaders without compromising its Mediterranean essence.

You can now read issue 11 of The Walking Society by Camper.

For more news about fashion and current affairs, visit our website.

The second part of Palace x Evisu arrives this Friday
Mercedes-Benz Fashion Week Madrid: Streetstyles VOL.1
ABRA SS22: The backstage pictures
ABRA SS22: This was its debut at MBFWM
SISYPHE: Crucero Finale
InnerCut previews part of their album with Natalia Lacunza and Ghouljaboy
Vans and Rassvet team up for first ever collaboration
Alizzz and C. Tangana finally collaborate on the protest song “Ya No Vales”
All the details about the NOCTA x Nike Golf Collection
Dive into the summer dreaminess of Kiko Kostadinov SS22
#BETHEMEISTER returns: irreverence and determination
Future Mars bases could be built with tears, blood and sweat