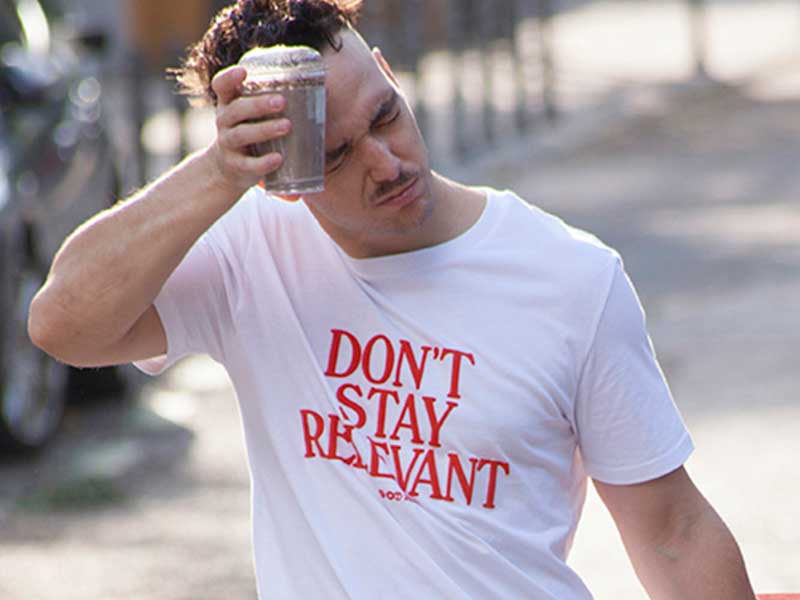 C. Tangana invites us to reflect with his new collection pieces. Expanding his merchandising range, El Madrileño offers us a limited edition t-shirt and cap with the slogan DON’T STAY RELEVANT. A phrase that has much more background than you can imagine. Through this text written by himself and the attached editorial you will understand – or not – the importance of the message. 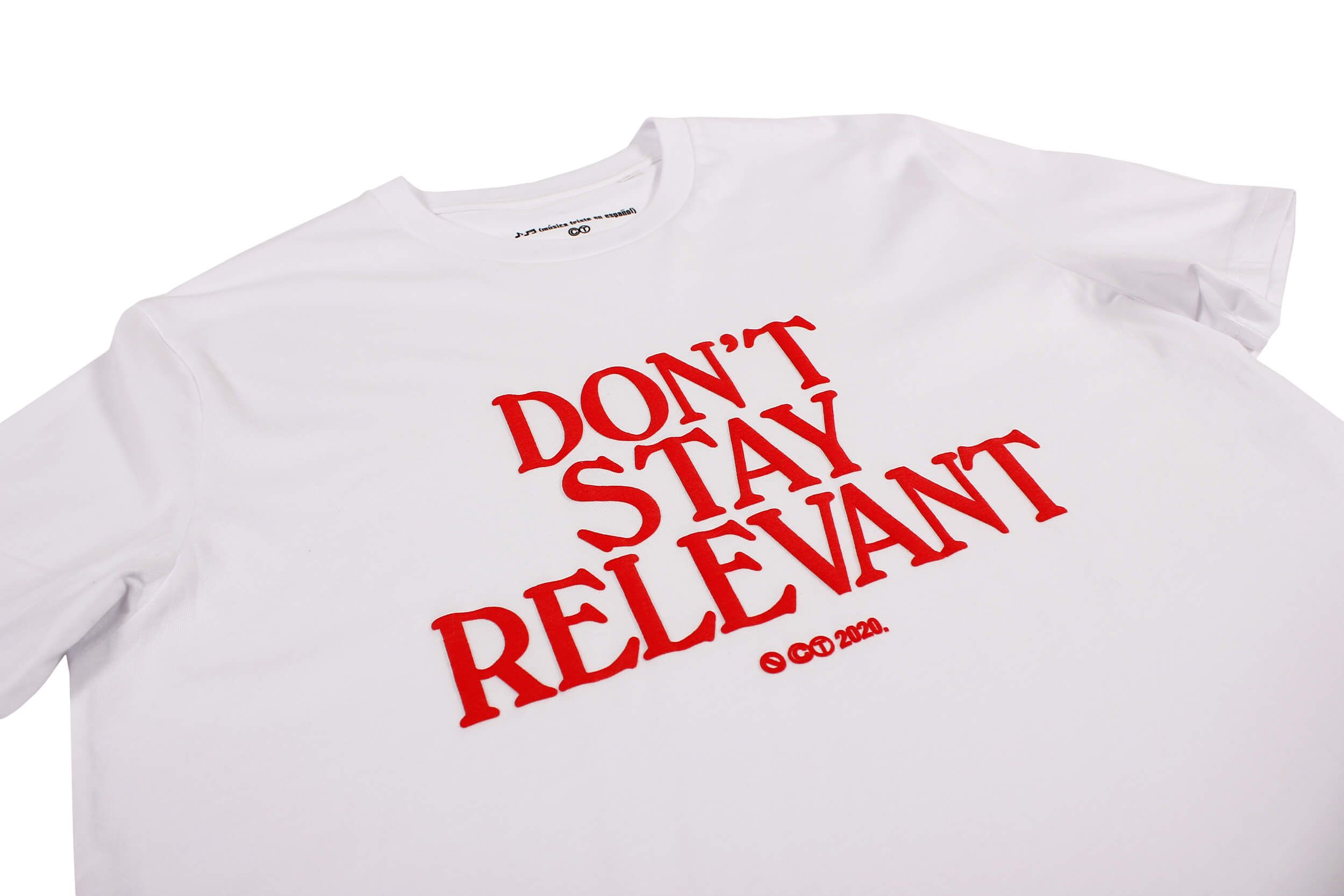 Text by El Madrileño – When I started in this business we would buy towers of 50 Verbatim CDs, we would spend a whole afternoon on them and we went to the Príncipe Pío switchboard to give out demos to any kid with Air Force who caught the line or who went from line 2 to line 10. Being relevant at that time was that your demo was in Ama Records to the side of self-produced albums from Madrid like Latragam’s or little jewels from the 90’s like O.C.’s Word Life. Nowadays the first thing I do when someone mentions a new artist to me is to look for a number of followers, an ass, a six pack, some tits. I look for all the ridiculous attempts he/she makes weekly to get attention, I judge them, I envy them, I compare them to mine. I analyze the trend. 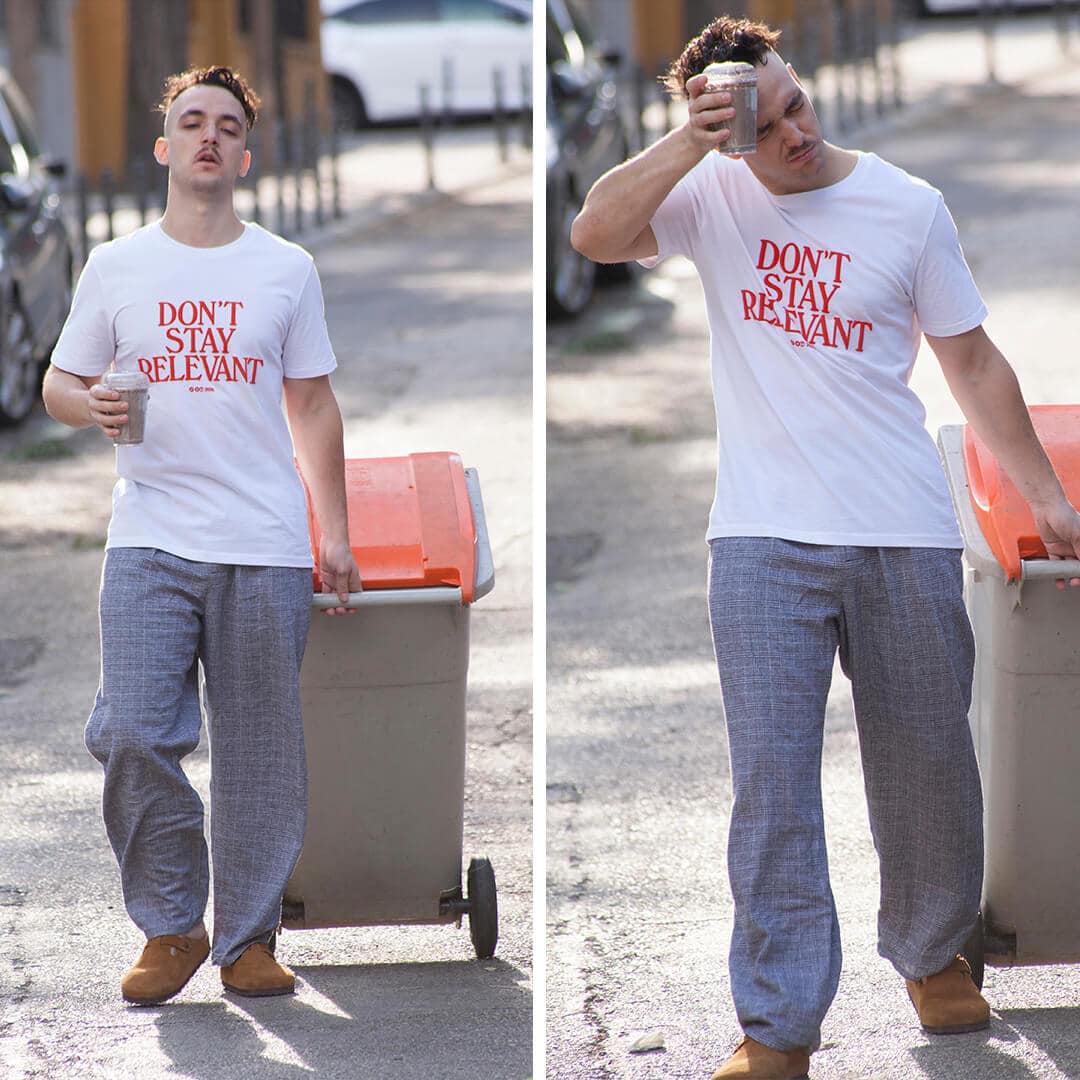 I have cousins who are the same age as I was when I started recording demos who think that songs are made so that challenges can exist. About 25 percent of the pictures I take are with people who don’t particularly like my music. Sometimes they don’t even talk to me, I appear on the courts in their neighborhood, in a famous place downtown. Part of the urban decoration in Madrid. What is this stupid face I put on when I take pictures? 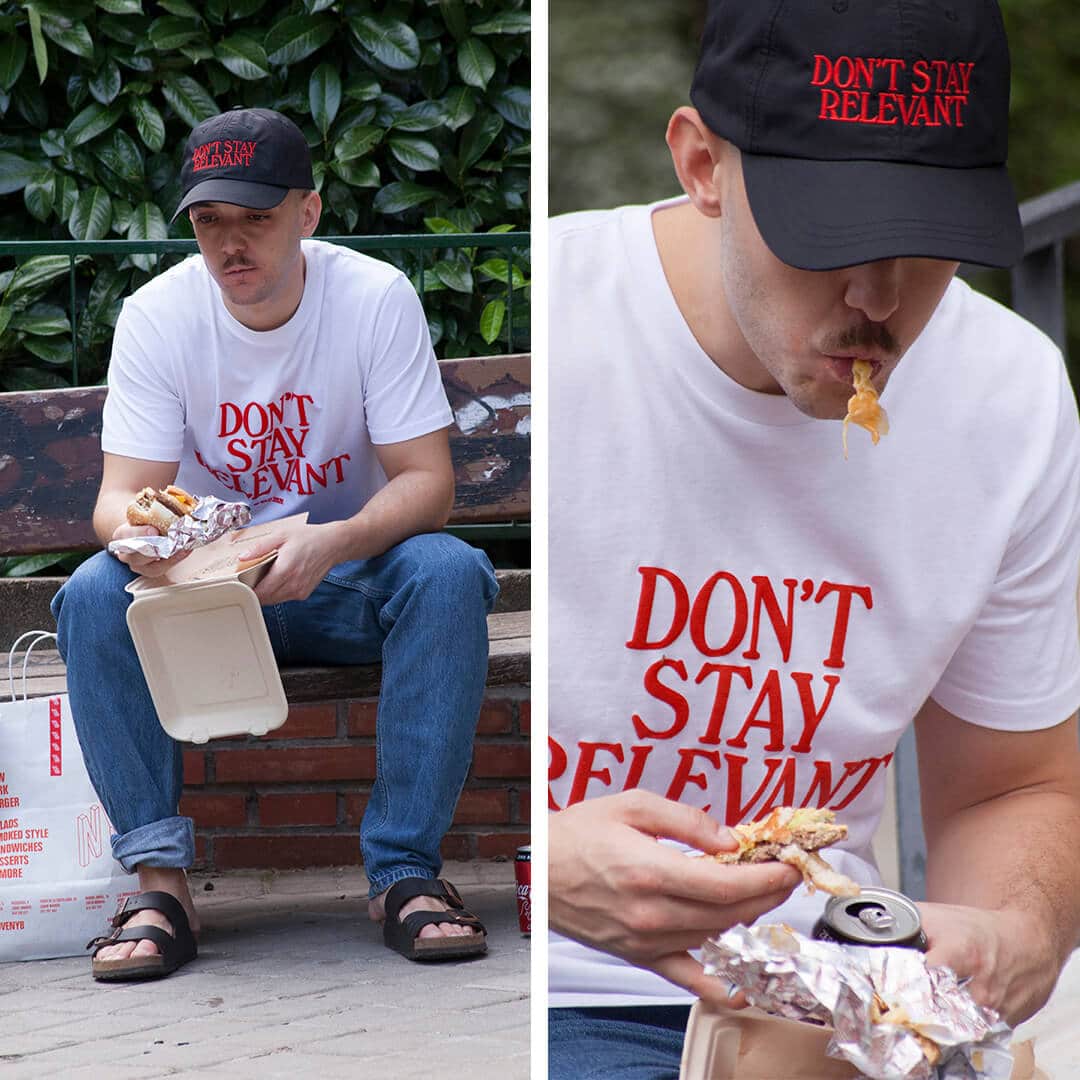 The other day after a strategy meeting where they were talking about spending figures that in my fucking life I would have imagined written on a signed paper, one of the people I respect the most in this industry told me that if I really wanted to succeed in music what I really had to do was to be the star of a Netflix series. I don’t know what the fuck is wrong with you people with the eye of the hurricane but we’re going to end up like fucking goats. A silent global pandemic: constant exposure. You’ve been 5 minutes without making a fool out of yourself in front of everyone please STAY RELEVANT or you will die painfully. I swear to you, if you don’t upload a selfie right now, your passage through the world will have been in vain. The new existentialism, the struggle of man against the algorithm. 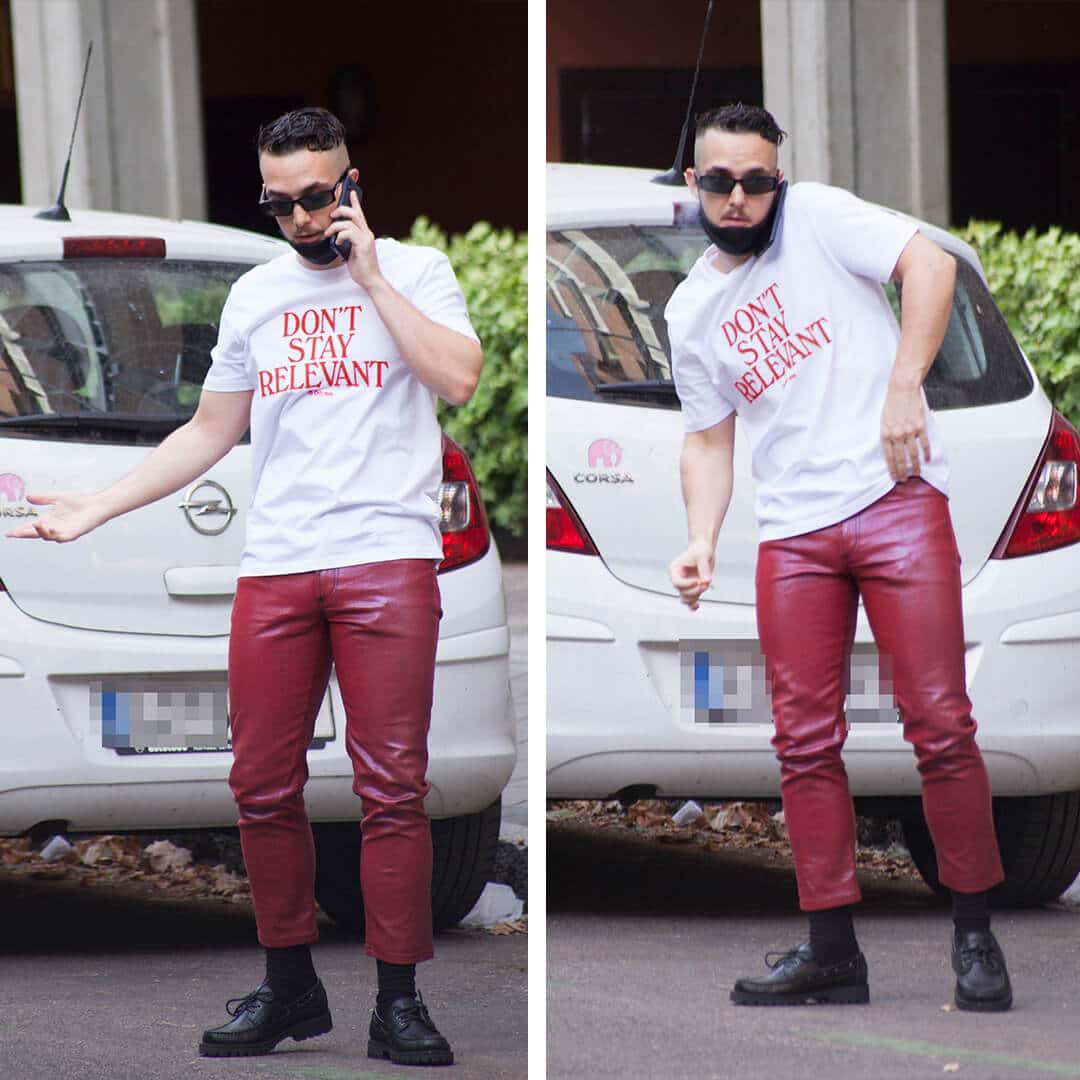 On the 16th I turn 30. Do I really have to get a tik tok? I always ask the same things for my birthday: Abundance and isolation. The fridge is full and the cell phone is off. Running parallel. I know I can’t afford it, don’t you believe it, I know because you told me. I hear it in what others do. I hear it from a distance in a call. It’s the echo inside the wave. STAY RELEVANT. 4 years up here, maybe it’s time to get down a little. Other day I bought a Daniel Sansavini’s T-shirt called TEAM TYSON and it has a quote on the back that says: “No one stays at the top forever”. Thanks Tyson. Analyze the contradiction as a trend. Being in the spotlight, under the spotlight, in, being stuck, on the crest, on the wave. Then : being in the dry dock, out of play, out, rotten. Finished. That’s how the game is: written. DON’T STAY RELEVANT. 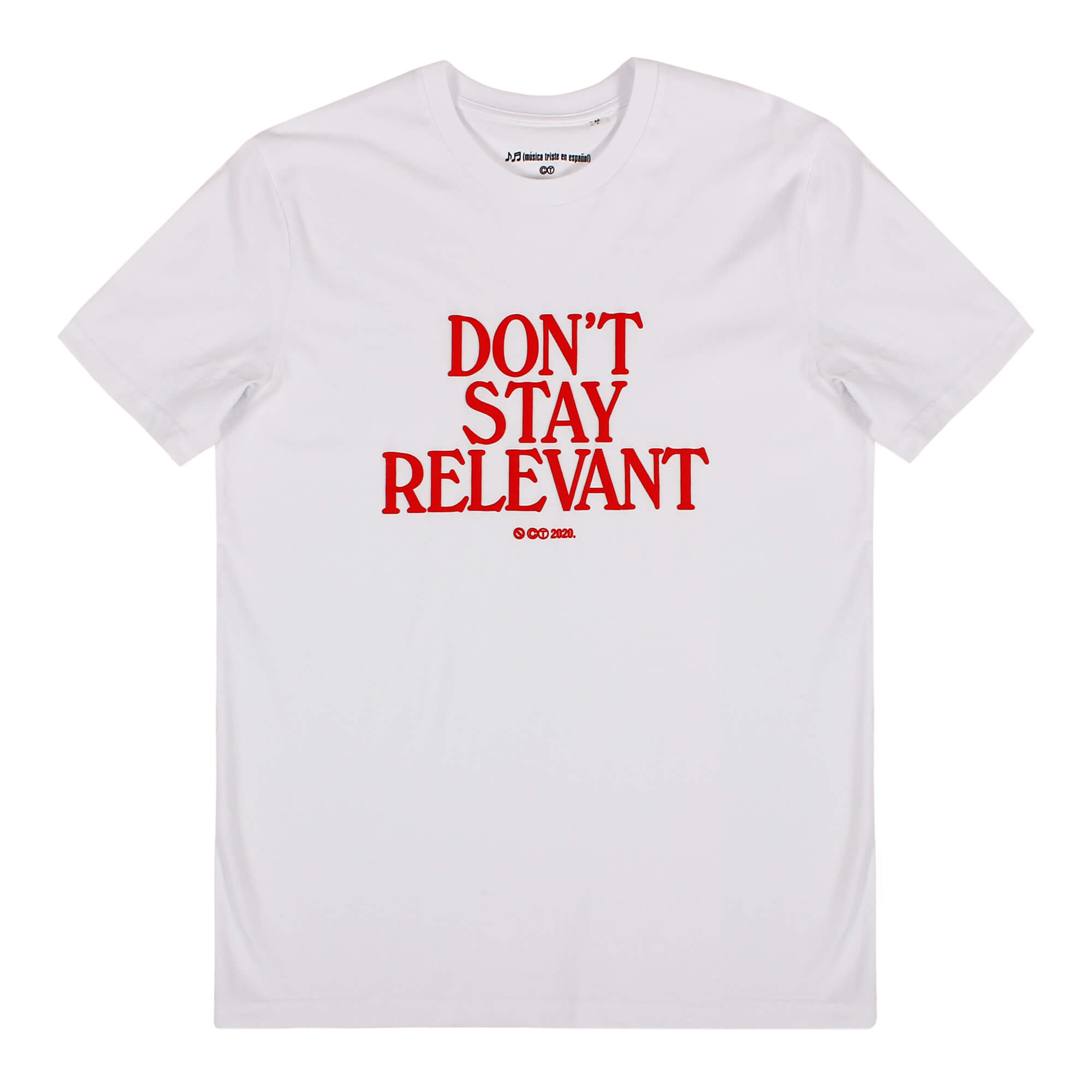 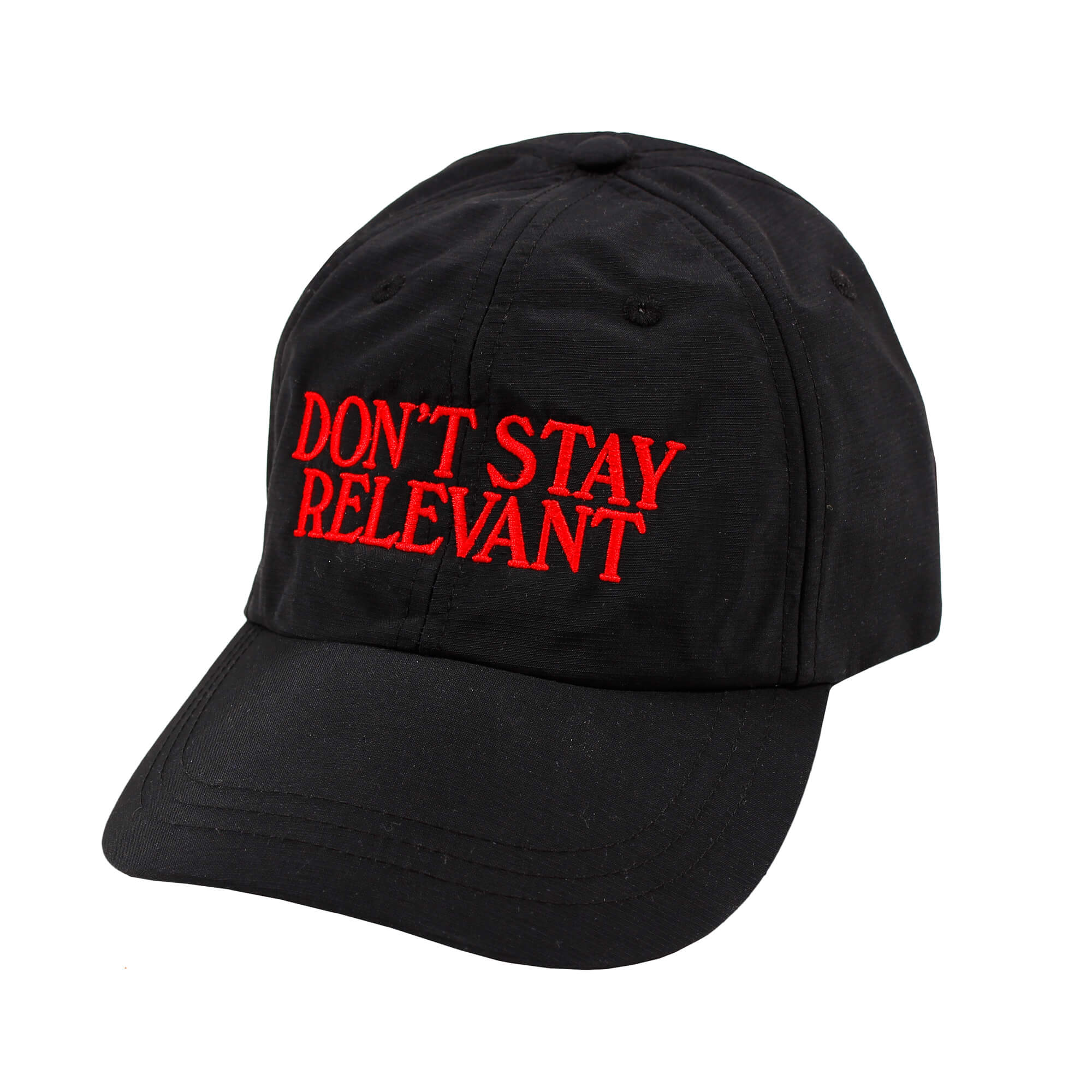 As you see a capsule loaded with concept that elevates even more the message of C. Tangana.

Both the t-shirt and the cap will be available from today at 21:00 CEST on the official website: www.ctangana.com.

Late Checkout debuts with ‘The Bellboy: Chapter I’
And 2021 arrived with “Eat you whole” by C. Tangana
We talk w/ Javier Ruiz
Mafia, fashion and glory. The romanticization of the gangster