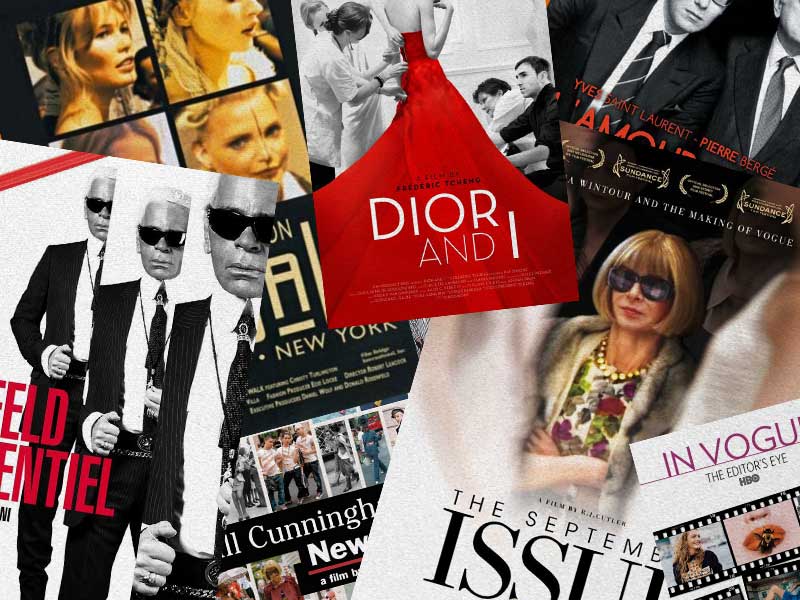 If you love fashion, these documentaries are a #mustwatch

Now that autumn is making its appearance – albeit timidly – we all need a sofa-TV plan. That’s why we’ve put together a list of those documentaries that are a #mustwatch for fashion lovers.

In recent years, the cameras have had access to some of the most prestigious fashion houses or magazines, which has generated excellent content to know first hand how to make a collection or the most expected number of a particular magazine.

With the following list we are sure we have set up, for some of you, the perfect Sunday plan :-):

After the exit of Raf Simons, this documentary offers us the scenes of the search for a new creative director, following in the footsteps of Yves Saint Laurent, John Galliano and, of course, Christian Dior. In celebration of the brand’s 70th anniversary, the series offers a unique insight into the luxurious French fashion house and this transition period between two designers until the arrival of Maria Grazia Chiuri.

The documentary, whose name leaves no doubt, follows the making of the September issue – the most important issue of the year – of 2007 of American Vogue. The documentary gives the public unprecedented access to Vogue’s inner workings; while it’s intriguing to see Anna Wintour working hard, it’s Grace Codington – the magazine’s former creative director – who really gets the limelight. Her fiery red hair and constant passion break down the myths of the film “The Devil Wears Prada“.

What is a day like in the life of Karl Lagerfeld? Lagerfeld Confidential will give you an idea. With a focus on the daily routine of the famous designer. Karl opens up about his German education and initial career, allowing the camera to follow him into intimate spaces, from his chaotic Parisian apartment to a private jet flight, giving viewers a glimpse of the man behind the infamous dark glasses.

This documentary tells the story of Jeremy Scott, from the lowest to his success. How from a small town in Missouri he becomes the creative director of Moschino. From humble beginnings, Jeremy overcame obstacle after obstacle to get to where he is today; this film takes a closer look at the man behind the extravagant designs. In the film, many cameos appear, including Miley Cyrus, Rita Ora, Katy Perry and the Hilton sisters.

Almost 50 years after founding his fashion house in 1959, Valentino Garavani, one of the world’s most famous designers, announced his retirement in 2007. Valentino: The Last Emperor – explores the designer’s professional and personal life, paying tribute to his career as he prepares for his latest show.

Instantly recognisable thanks to her oversized glasses, Iris Apfel is recognized as one of the most legendary style icons of New York society. Iris is an in-depth portrait of the business woman she really is. At the heart of the film is her unwavering energy, with her free spirit and lively nature that reminds us that (no matter how cliché it sounds) fashion is fleeting, but style is truly eternal.

To enter the world of haute couture creations, you have to see Dior and I, who tells the story of Raf Simons in Dior’s house after his arrival in 2012 and the challenge of creating his first haute couture collection as artistic director. With only eight weeks to run, in Dior and I, we follow Raf on an intense journey as we pay tribute to the seamstresses who make his beautiful collection come to life.

After The September Issue , the editors of Vogue – United States returned to the screens with In Vogue: The Eye of the Editor, commemorating the magazine’s 120th anniversary. Rather than focusing on a specific topic, it examines how some of the publication’s most famous publishers emerged. In addition to the editors, a famous face appears that has contributed to the magazine’s legacy, with interviews with design talents such as Marc Jacobs and Nicolas Ghesquière, and Hollywood stars such as Sarah Jessica Parker or Nicole Kidman.

L’Amour Fou explores the life of the man behind the brand of the same name and shows the relationship between him and Pierre Bergé, the designer’s partner in both business and life.

The greatest streetstyle photographer of all time, Bill Cunningham, is something of a fascinating enigma, and even after watching this documentary he still is. Although it only touches briefly on Cunningham’s personal life, it delves into his work for The New York Times and the joy it has brought him. What is most fascinating and moving is Cunningham’s humility, despite the artifice and pretense of the industry in which he has worked for much of his life. His passion for his work is palpable and magical.

Covering Lee McQueen‘s remarkable career, this film is a rich exploration of the legendary designer’s mind. With a focus on his fashion shows, the documentary explores how this East London boy became the icon of Paris and the enfant terrible of the fashion world.

Catwalk, a documentary about life on the fashion runways, was filmed in 1993 by director Robert Leacock and released in 1995. The film followed models Christy Turlington, Naomi Campbell, Yasmin Le Bon, Kate Moss and Carla Bruni as they flew through London, Milan, Paris and New York during Spring Fashion Week. The film was shot in black and white and colour, and featured many of the best designers of the day, including young John Galliano, Justin Thomas, Karl Lagerfeld and Gianni Versace – four years before his death.

The Boy Who Made Shoes for Lizards is the charming portrait of legendary shoe designer Manolo Blahnik, whose impeccable dedication to his craft set a fashion standard among industry celebrities, stylists and icons. Fashion journalist Michael Roberts takes us into the world of Mr. Blahnik, with a “who’s who” of the fashion industry with presence of:  Anna Wintour, Rihanna, Paloma Picasso, Iman, Naomi Campbell, Rupert Everett, Karlie Kloss, André Leon Tally, and much more.