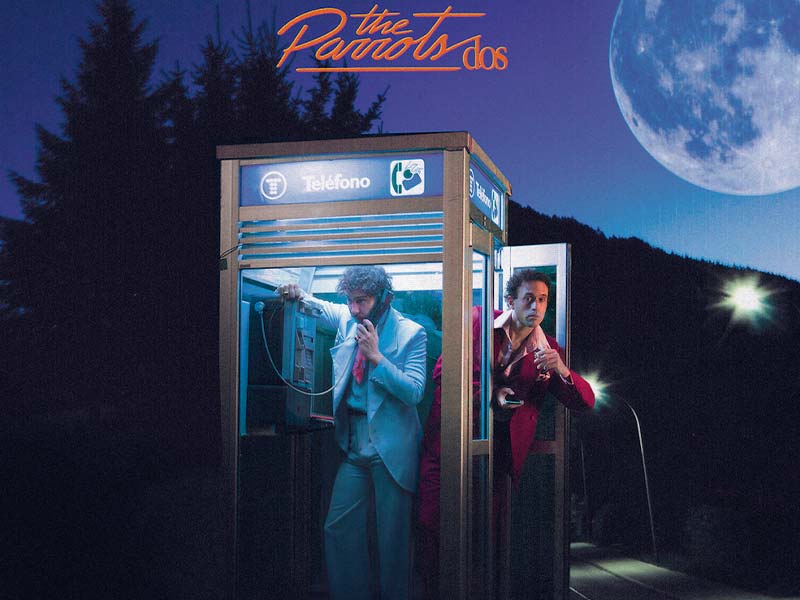 Madrid’s The Parrots have today announced the details of the release of their energetic new album ‘Dos’ which is due for release on Heavenly Recordings Friday 29th October 2021. The band also share the video for the latest single ‘You Work All Day And Then You Die’. 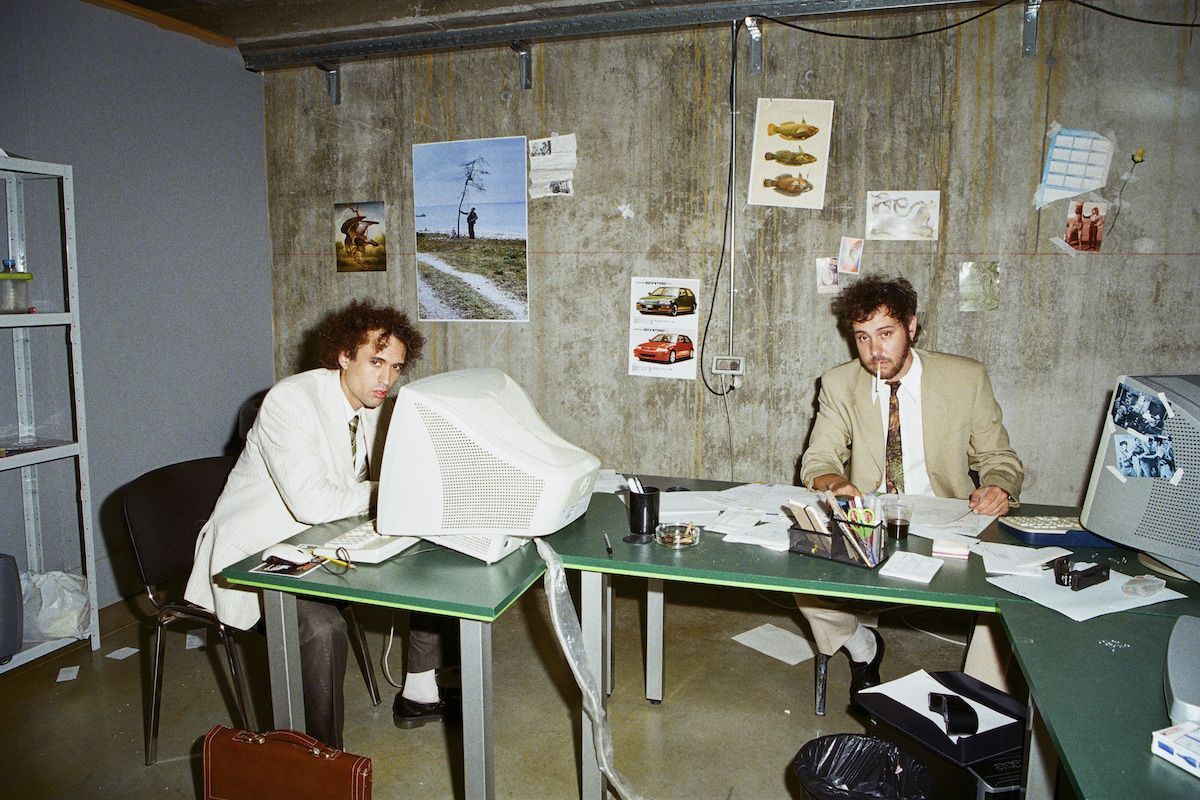 The new album ‘Dos’ is the follow up to the Madrid duo’s (Diego García & Alex de Lucas) acclaimed 2016 debut ‘Los Niños Sin Miedo’ and shows the band taking an evolutionary step that finds them sounding stronger and more realized than ever before, from their original characteristics of stripped-down melodic garage rock to a fresh sonic perspective. Produced by Tom Furse (The Horrors) and mixed by Claudius Mittendorfer (Parquet Courts, Weezer, Panic! At The Disco, Temples); The Parrots find themselves experimenting with more modern production soundscapes and electronic grooves.

The 11 track album will also include the previous single ‘Maltido’ (featuring multi-million selling Spanish rap super star C. Tangana) and the track-listing is as follows:

Dos, new album by The Parrots

Rolling in on an unbreakable motorik groove, The Parrots second album – Dos – starts very much on the front foot. You Work All Day And Then You Die is a bold statement of intent, a signpost at the side of the road that tells you straight about the futility of our modern lives spent chained to the work station. As the chant-along chorus goes, “It’s hard to find some peace of mind” – a line that feels like a reaction to the last year and half on planet Earth.

From You Work All Day And Then You Die’s relentless pulse to closer Romance’s end of the night celebration of friendship and survival, Dos is an all consuming, life-affirming joyous noise. Where The Parrots debut – Los Niños Sin Miedo – howled and rattled like the garage bands that had inspired them in their formative years in Madrid, Dos was conceived by Diego Garcia (guitar, vocals) and Alex de Lucas (bass) as a chance to showcase their wider ambitions. That desire to expand the band’s sound led them to working with producer Tom Furse from The Horrors. 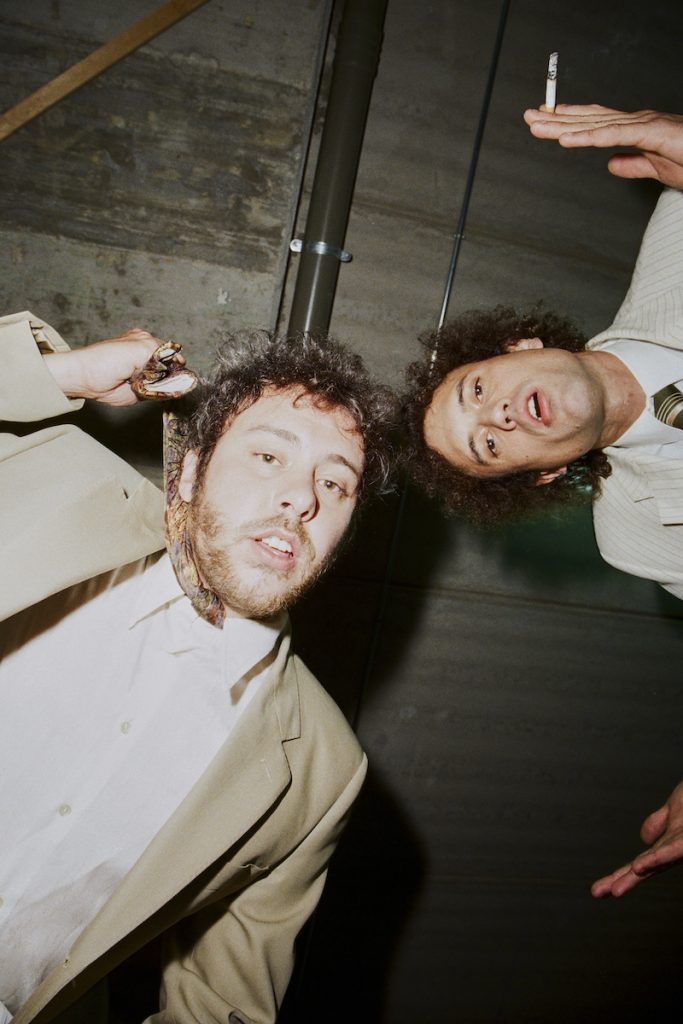 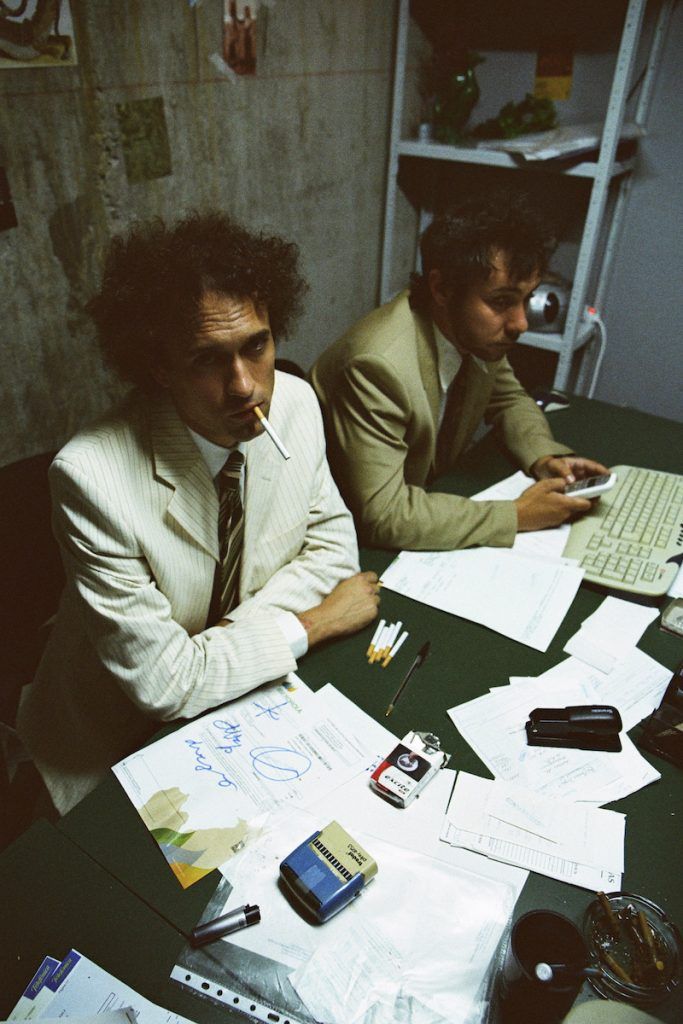 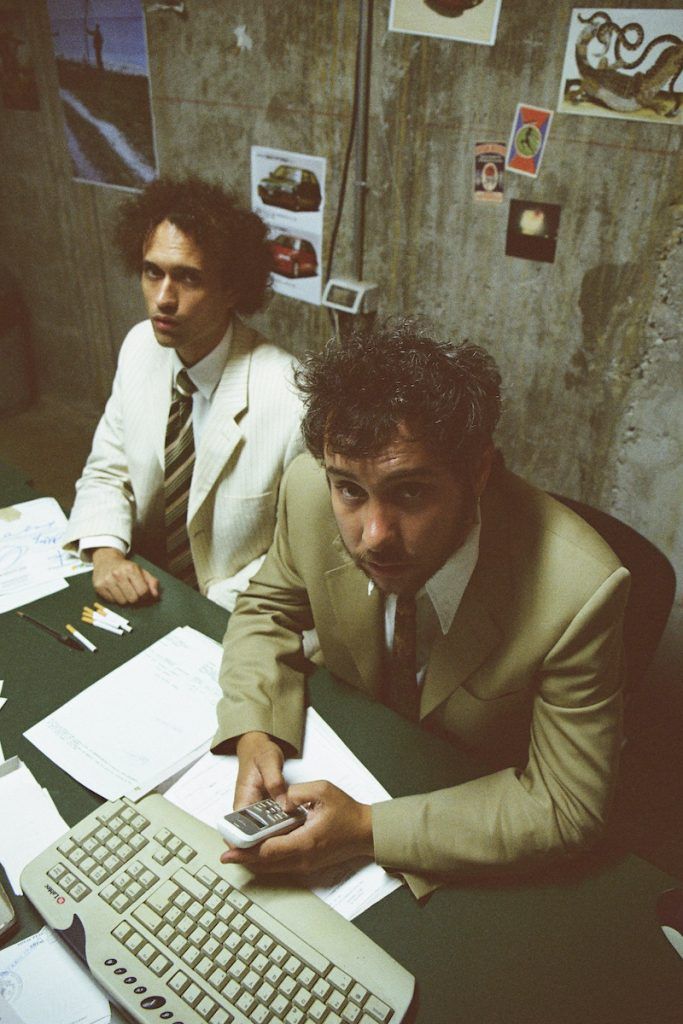 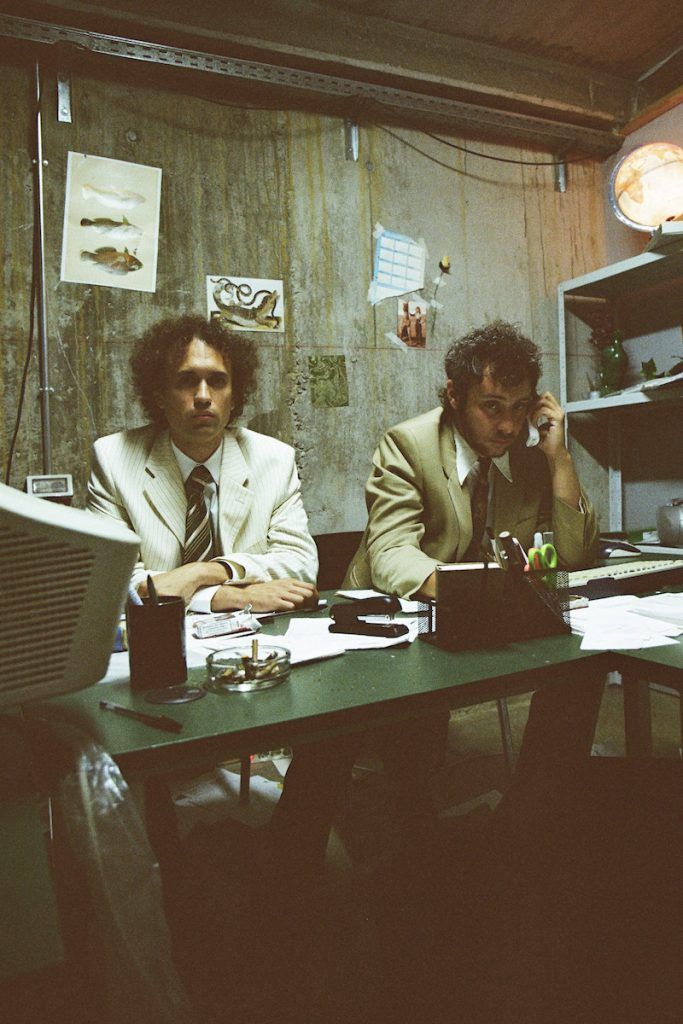 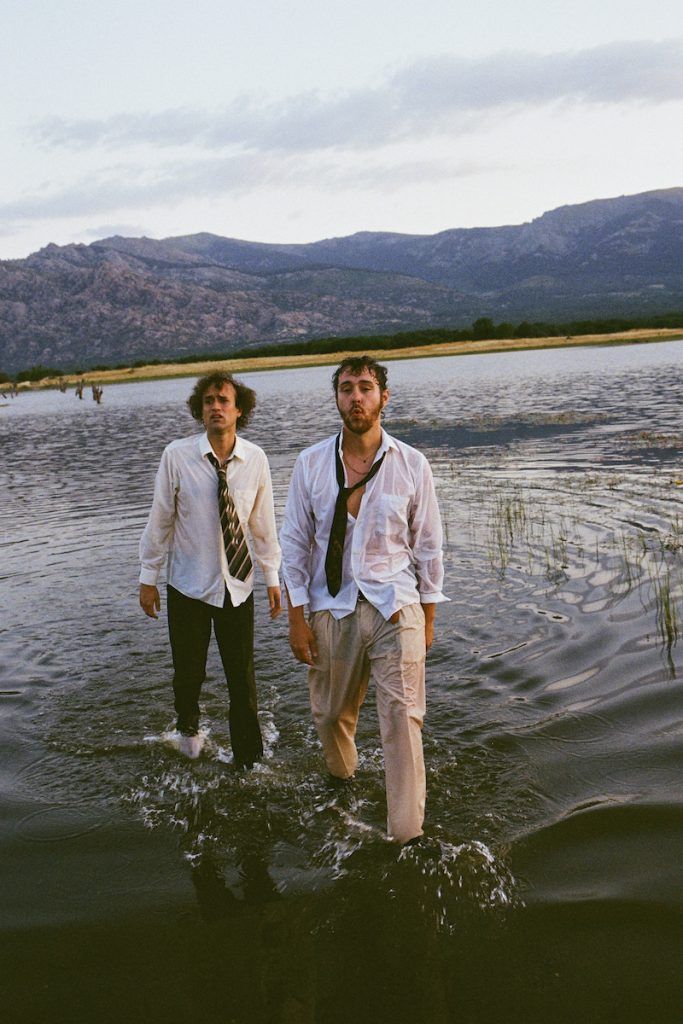 Fans of The Parrots previous records and their life-enhancing live shows needn’t worry that things have changed too much. Dos is still very much a garage rock record, only one now painted in brighter, bolder, more psychedelic colours. Just Hold On is a summery late ’60s West Coast stomp while Nadie Dijo Que Fuera Fácil (translation – Nobody Said It Would Be Easy) and Amigos recall modern psychedelic voyagers such as Spacemen 3 and Super Furry Animals – bands who effortlessly combined drones with celestial melody. Elsewhere, It’s Too Late To Go To Bed sounds like something released on Ze Records in the early ’80s.

When you spend some time with Dos – the riotous and addictive second Parrots album – you’ll realise it’d be wise not to wear your best clothes the next time they roll in to town as you’ll invariably be going home drenched, ecstatic and covered in footprints. Bring it on.

The Parrots talk about the new record by saying: “Most of the album was recorded in Wilton Way Studios in Hackney in periods between summer 2019 and the start of 2020. Because of lockdown, it ended up getting finished in Madrid with Harto Rodriguez. Recording at home was really nice because it meant we could call on some of our very talented friends to join us in the studio. Most of the record was written before the lockdown but that unexpected pause in all of our lives made us rethink some of it and finish bits off in a different way. Also, when we knew we couldn’t go back to London to finish it, we decided to invite a lot of our friends back home to the studio. That made recording feel almost like a celebration. Everyone we knew was fine; even with the global pause we could still find the bright spots and stay together.”

“Even though garage rock is kind of the core of all our influences, in the last few years we’ve been listening to lots of stuff that we’d kind of relegated to a second position. We rediscovered a lot of artists that we listened back when we first fell in love with music – bands like LCD Soundsystem and Gang of Four, lots of mutant disco. Tom really helped us there, he made sense out of the chaotic mashup of influences that we brought into the studio. And because we’ve always loved hip hop, we followed a different approach to putting songs together, using samples and sampling ourselves a lot. Beastie Boys, ESG, Devo, Los Zombies (the Spanish band) were all a very big influence on the tone of the record. Also the Spanish music scene has been changing a lot in the last years and listening to a lot of new Spanish artists has helped us break down some walls and made us create music in a more free way.”

The video for the new single and album opener ‘You Work All Day And Then You Die’ was directed by Joaquin Luna and was filmed on location in Madrid.

Video director Joaquin Luna speaks about the video by saying: “This video shows 4 parallel stories where the characters struggle with abusive work conditions. They break their anxiety and anguish when they let go of their compliant attitude. In a growing catharsis they show their vulnerability and chase an easy, absurd liberation from a hostile environment.”

The band also talk about the new track by saying: “We wanted to write this song for a long time. The sounds, the epic in it were something that we had wanted to express for a long time and couldn’t have done it without the help of our amazing producer, Tom Furse. On the lyrical side, we’ve been feeling that people are settling and giving up their dreams for the ones people post on social media, we wanted to express that lack of individuality, how it’s easier to copy other models of success rather than follow your own. With this song we wanted to punch that trend (or feeling) in the face and remind people and ourselves that success has more to do with personal feelings and self care than social acceptance. We’ve always felt very comfortable being treated as outsiders in most circles and we are proud of that, fight back, don’t kneel and don’t try to be liked by everyone. Some things work for you but others may not. Why are people so worried about communism and stuff when it’s capitalism itself which tries to make us all exactly the same, boring with the same dreams and motivations?”

The production company Supersonic go on the say: For us, “You work all day” has been the ultimate Madrid adventure, roaming the suburbs and the inner city full of workers that are dead inside.

You Tour All Day And Then You Die

The Parrots will also be heading back out on the road in early 2022 and have confirmed the following live shows. The UK tour dates are as follows: 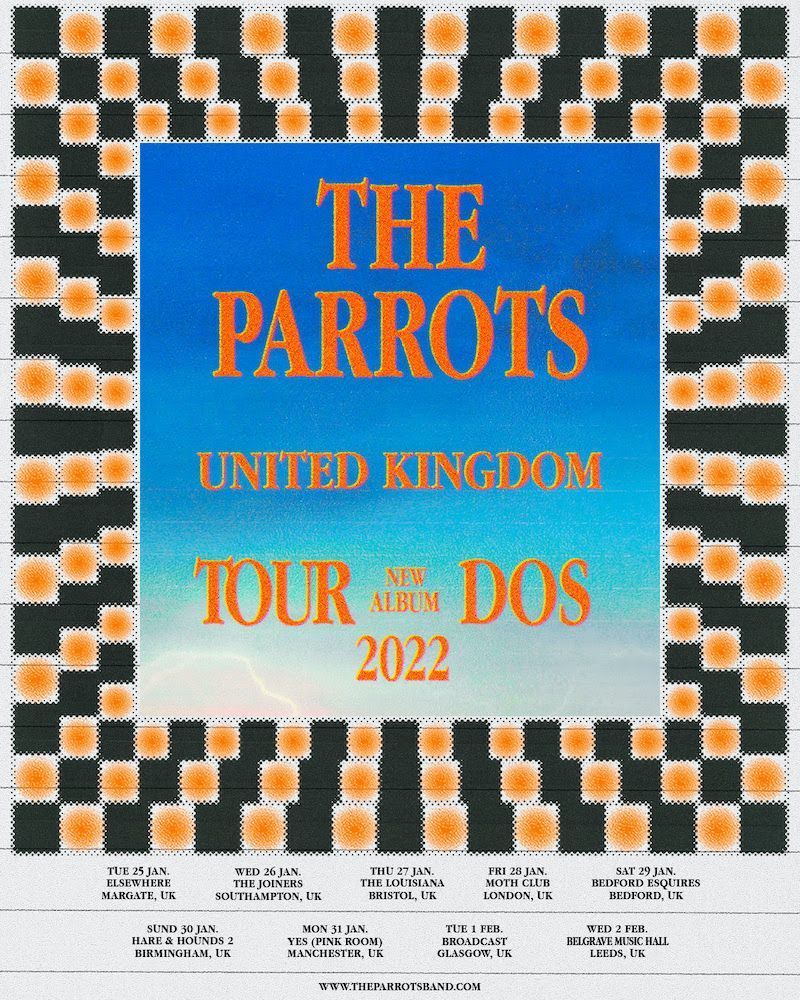 Visit our website and discover the latest musical news.

Find out who are the models who are currently making a name for themselves
Selecta covers ‘Niña Piensa En Ti’ and announces the opening of its own club in Madrid
Carhartt WIP collaborates with Timex for a timeless, utilitarian release
Tommy Jeans elevates his musical legacy through Tommy Revisited: Music Edition
The Runner Sneaker by Balenciaga now in a multicoloured version
Saint Laurent Winter 21: Discover the campaign
Kill Bill 3 could be Tarantino’s next film
Monte-Carlo is once again present in the new Casablanca collection
Two days left for the second winter drop of Palace
You can now immerse yourself in the universe of ‘The Office’
Want to win an iPhone 13 Pro? Pull&Bear tells you how
The Bulldozer Mini Boot is the latest necessity Balenciaga has created