Prada Marfa was conceived as a permanent art installation created in 2005 by Scandinavian artists Elmgreen & Dragset. Located in the middle of the Texas desert, about 60 km from Marfa, the work represents a Prada boutique designed according to the minimalist movement. The main idea was based on the creation of a piece that would deteriorate over time. However, its significance has made Prada Marfa a symbol of Selfie culture. 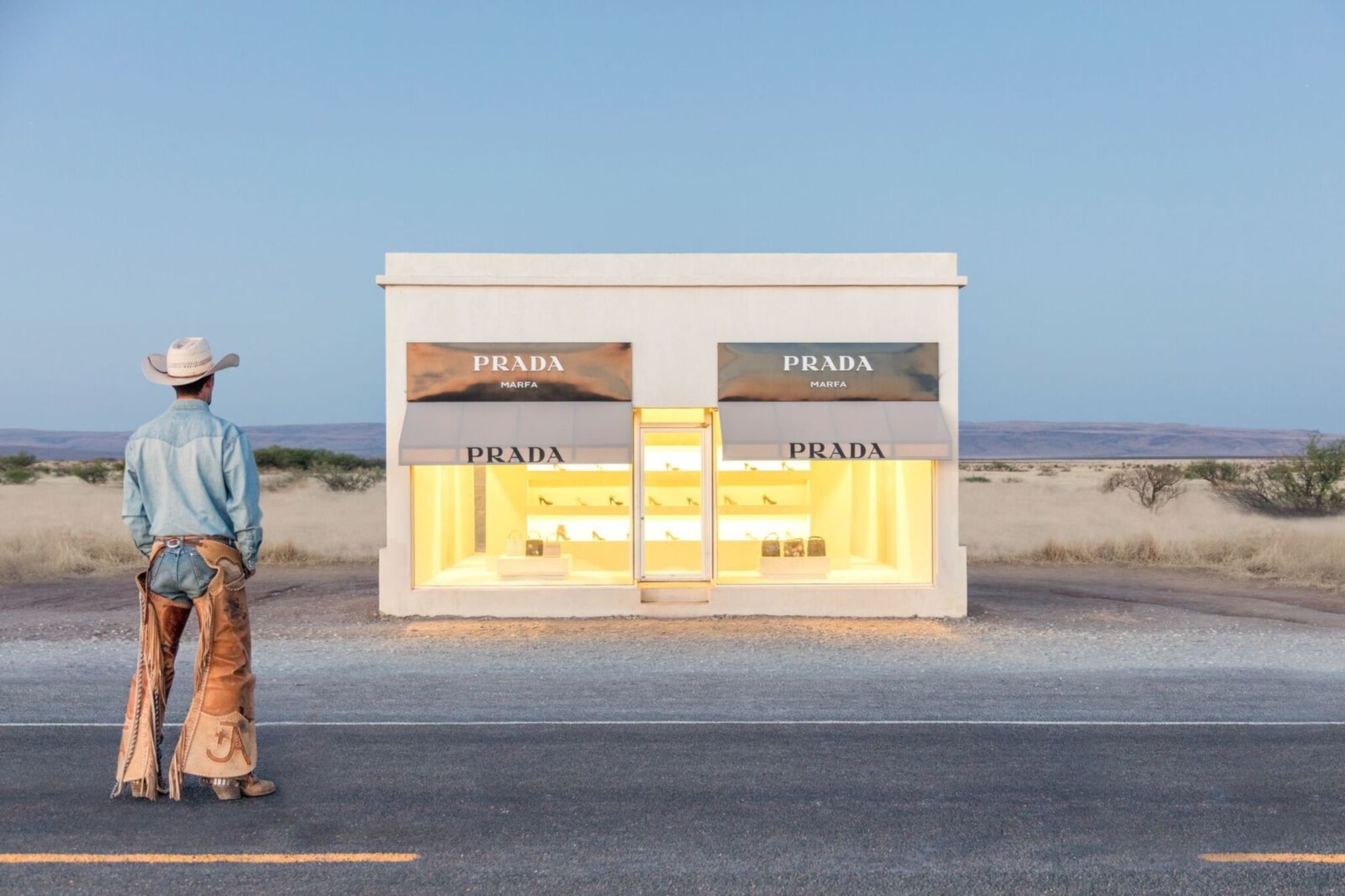 I suppose you all remember the mythical painting of Prada Marfa -> 1837 MI in black letters on a white background. Some of you may still be talking about it. This painting became a cultural phenomenon after appearing in the hit series Gossip Girl. Since then it has been decorating the bedrooms of teenagers all over the world. The work’s fame increased when the installation itself appeared in an episode of the Simspons and even more so when Beyoncé published a photo in her instagram account.

Well, Prada Marfa is an art installation created in 2005 by Scandinavian artists Elmgreen & Dragset and with the help of architects Ronal Rael and Virginia San Fratello. Located in the middle of the Chihuahua desert in Texas, about 60 km from Marfa, the work was funded by the Marfa Ballroom, a center for contemporary art and culture. Also by the local Art Production Fund. The title of the work refers to Marfa, a symbolic city in the art world, since Donald Judd, artist and architect of the minimalist movement, settled there in 1971.

Although the work was not commissioned by the Italian house, Miuccia Prada herself gave all the support to the artists, providing the installation with some accessories from the brand’s FW05 collection. The result is a building that acquires all the characteristics of a Prada boutique, including its logo. 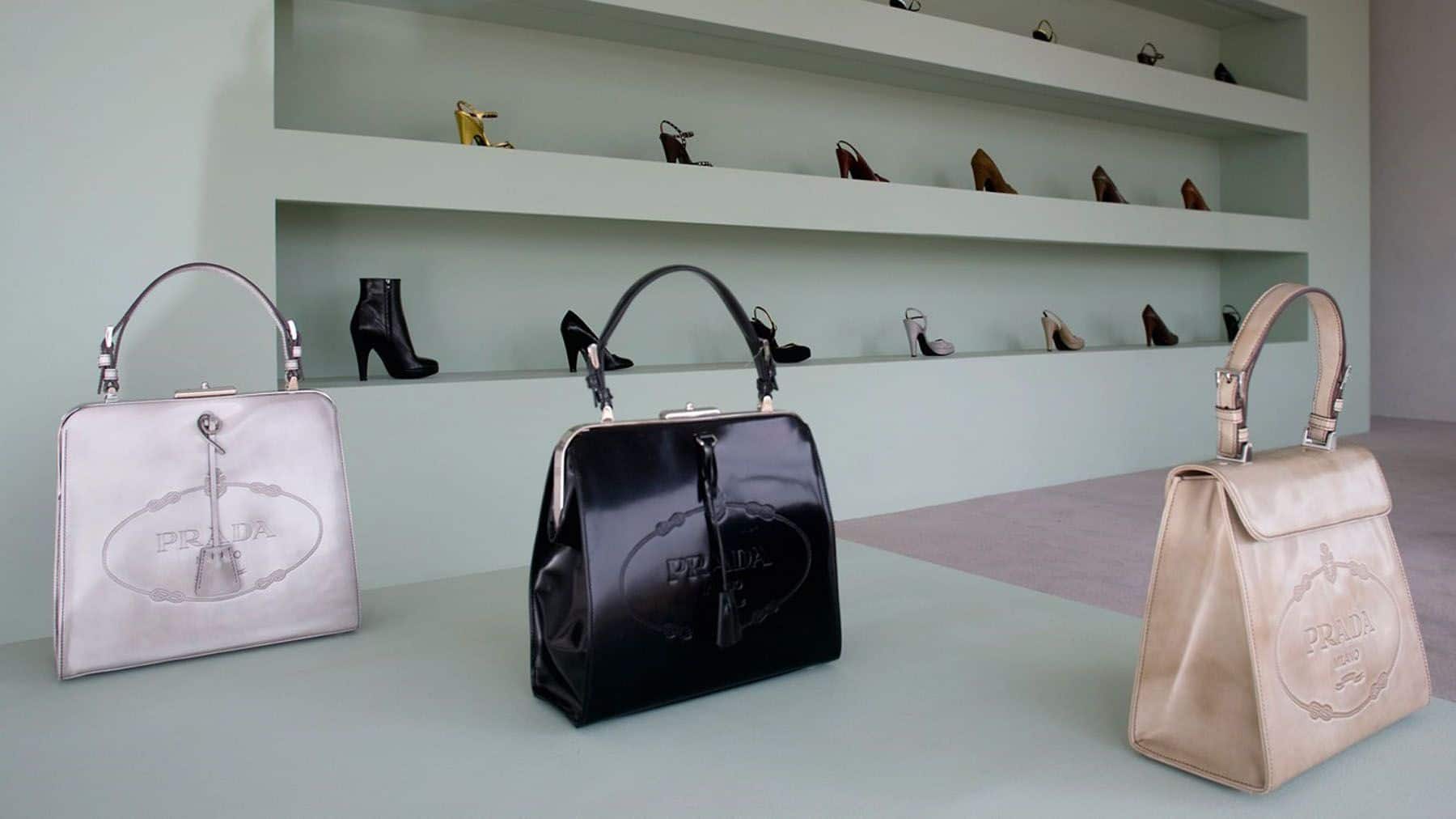 Prada Marfa was conceived to be deteriorated by the passage of time. Located in the middle of a hostile territory, it would not take too long to disappear. In fact, the entire structure was built with biodegradable materials so as not to generate waste.

Three days after its inauguration, the work was vandalized: the walls were covered with graffiti and the objects were stolen. Since then, the structure has been equipped with alarms, the sales were replaced with more resistant ones and the whole is periodically restored and cleaned. 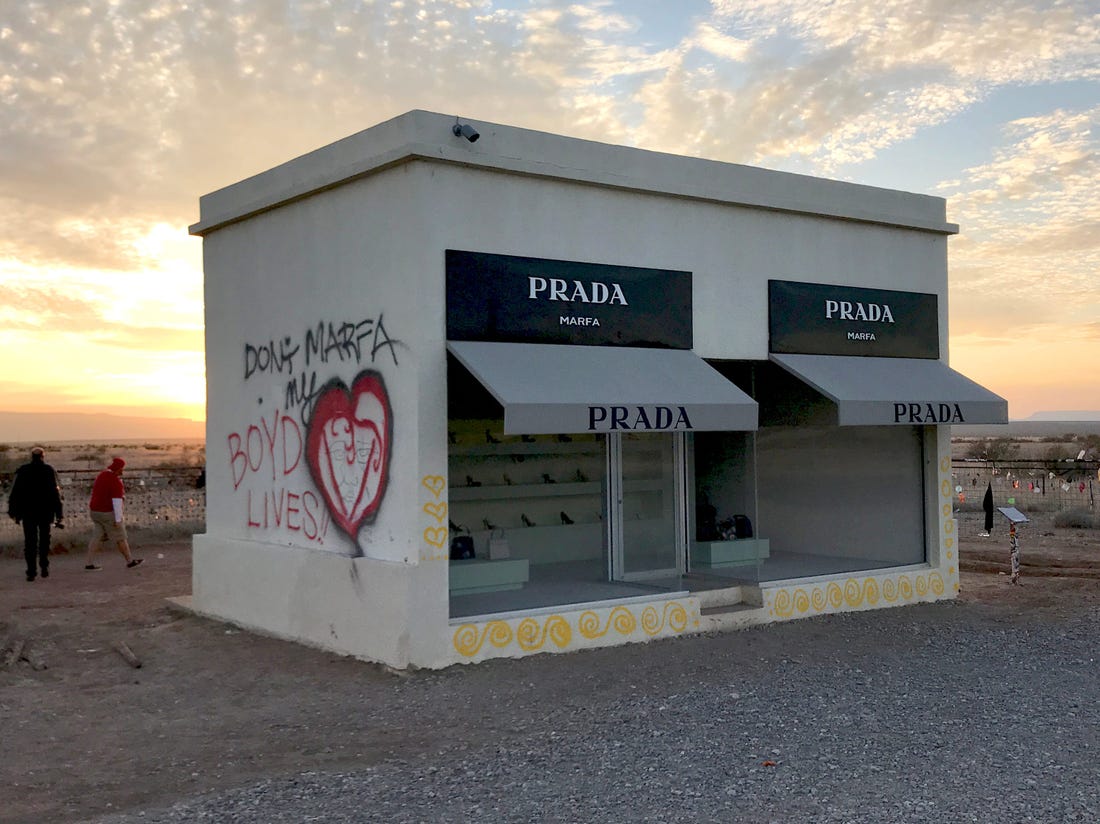 Have the artists betrayed their own values? 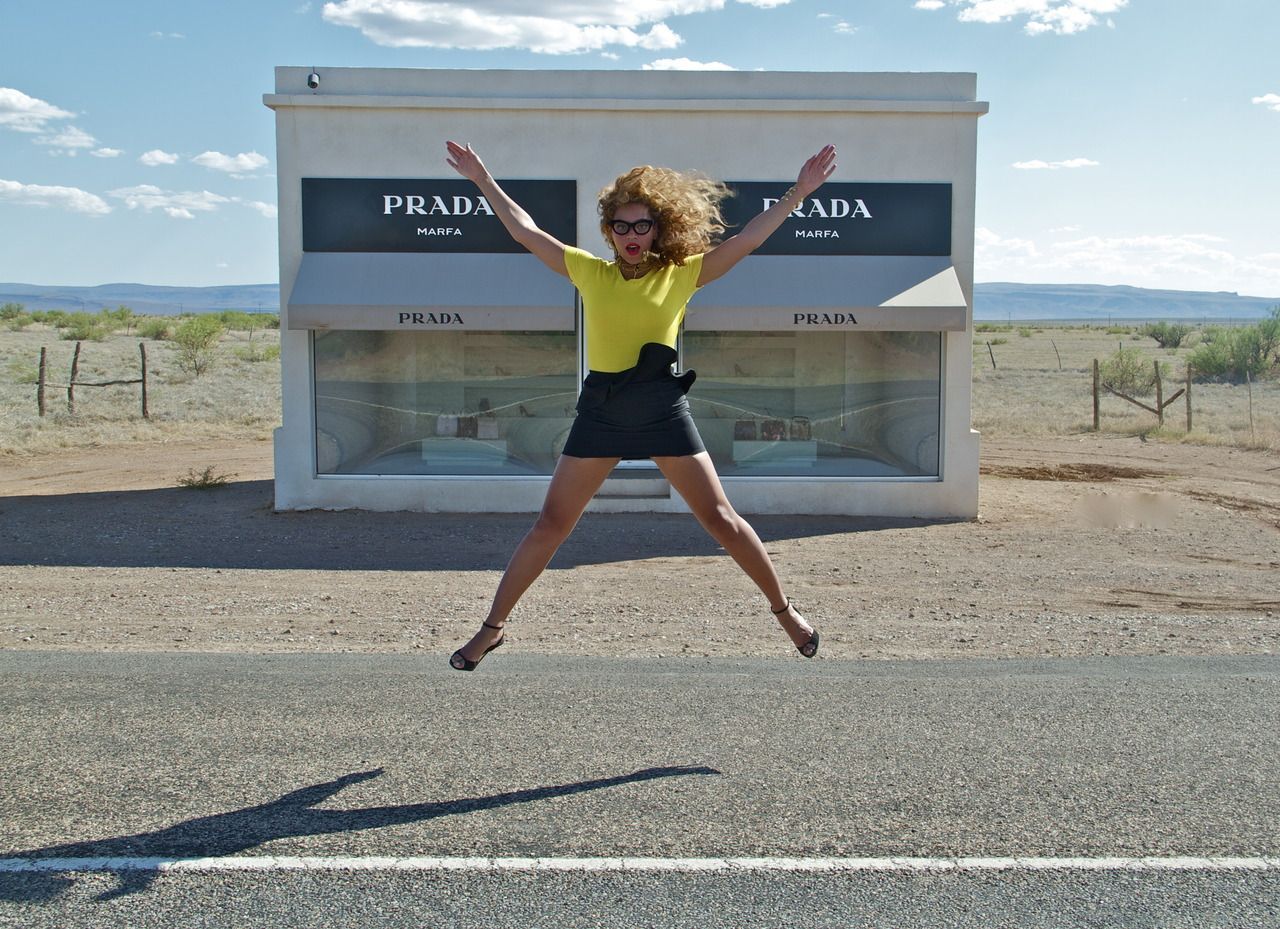 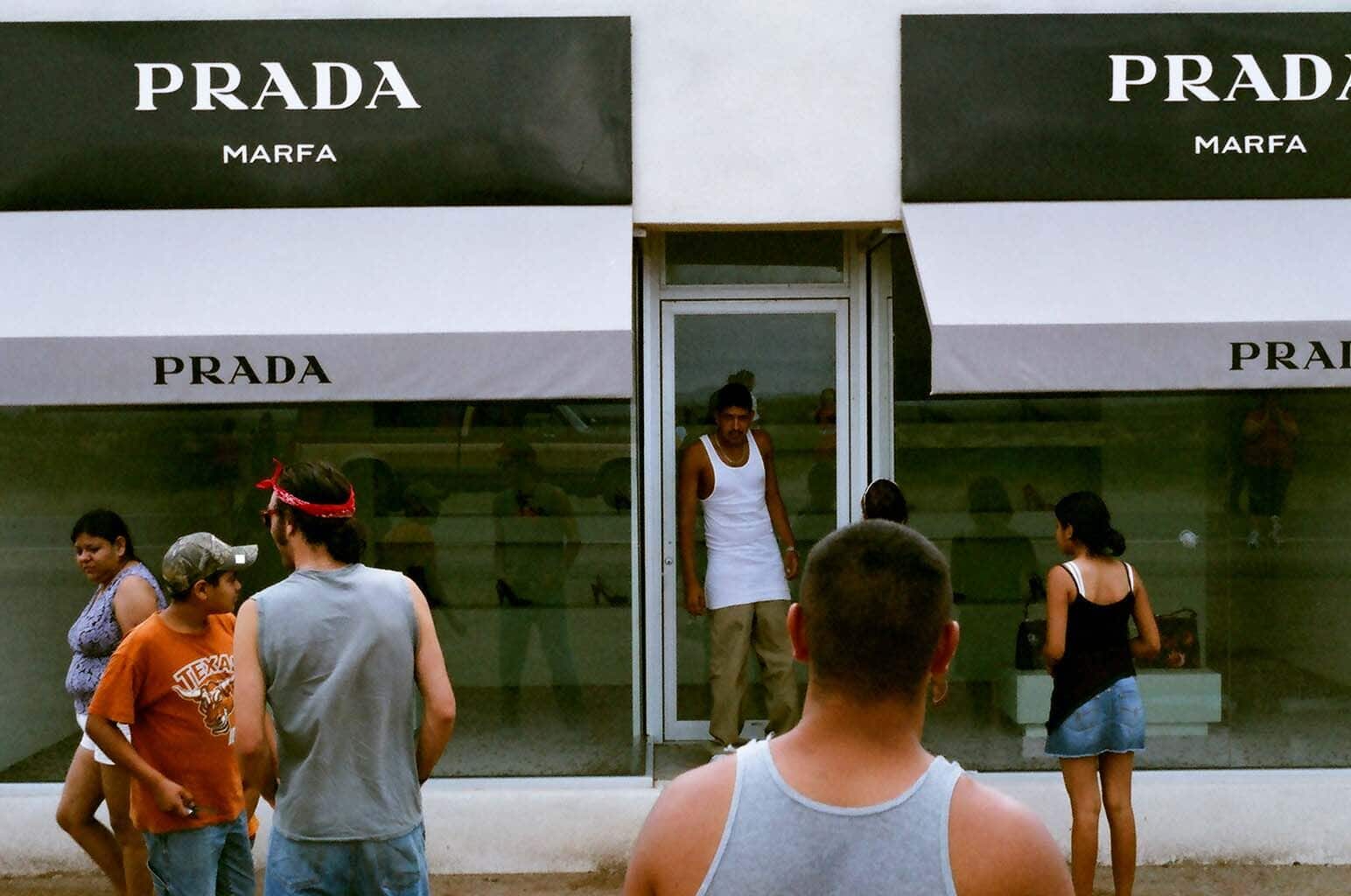 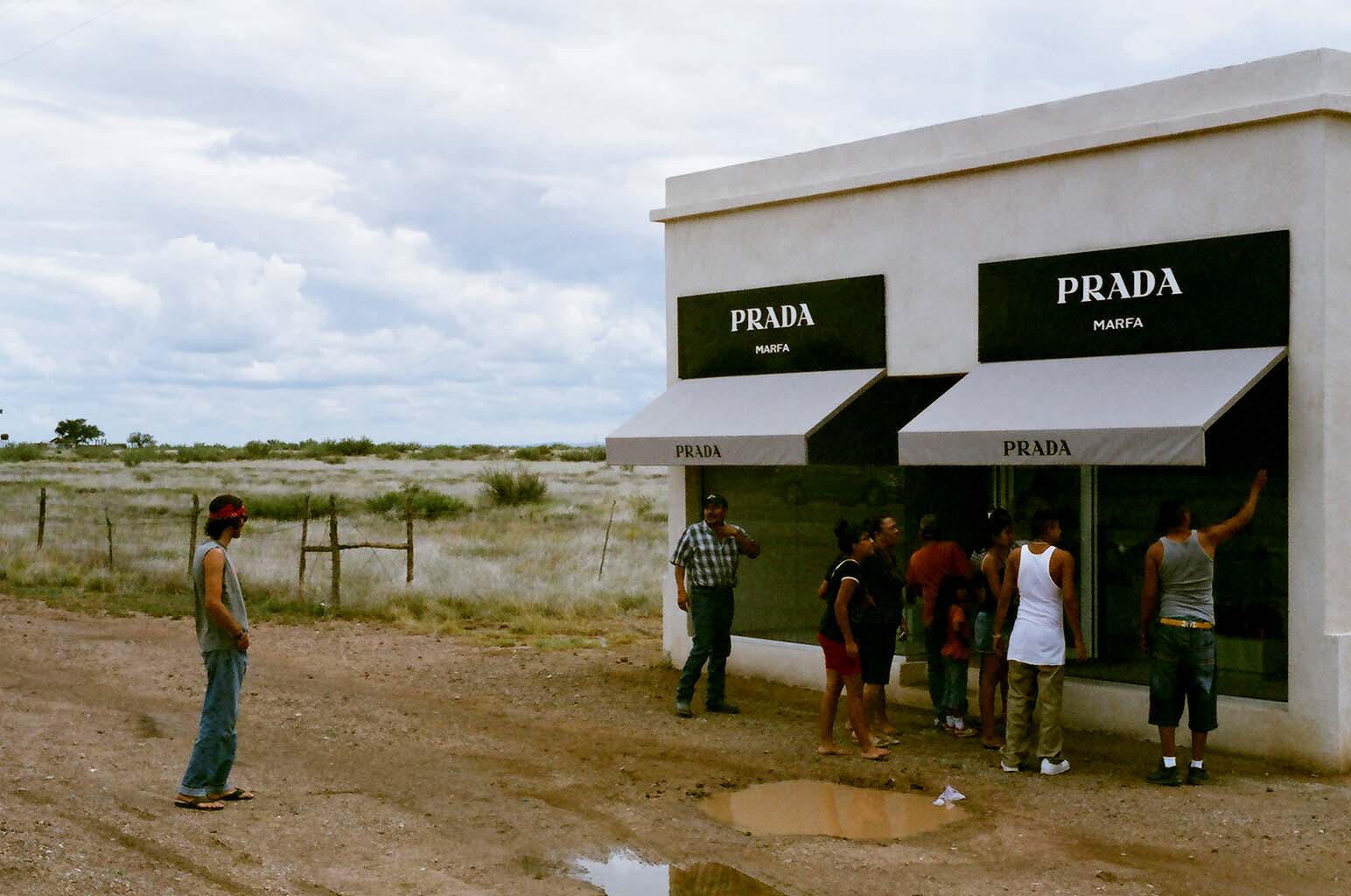 During these years, Elmgreen & Dragset have claimed that the work has acquired a completely different identity from the original. However, they maintain that the evolution of Prada Marfa was made possible by the public’s perception and its relationship to the work of art. Therefore, the transcendence of Prada Marfa has created an unimaginable pact with the viewer by elevating the experience of art. In an interview with The Guardian, Elmgreen explained that when people interact with art, they feel they have a voice in public space.

New Balance TDS designs a 3 in 1 sneaker
adidas and Stella McCartney together for sustainable sport
You can now take pictures from space thanks to Canon
The future of SHOOP Clothing for SS21: “Faith, hope, love”
Prada FW21, Raf inspiration
Mary-Kate and Ashley Olsen sell their research archive
Salomon Advanced rescues references from its archive for SS21
Maison Margiela and Reebok launch Classic Leather Tabi Bianchetto
These are the Prada bags for SS21
All about Billie Eilish’s new book
“What We Do All Day: Martine Rose’s New Reality for SS21
Become a Ninja Master with Reebok x Kung fu Panda