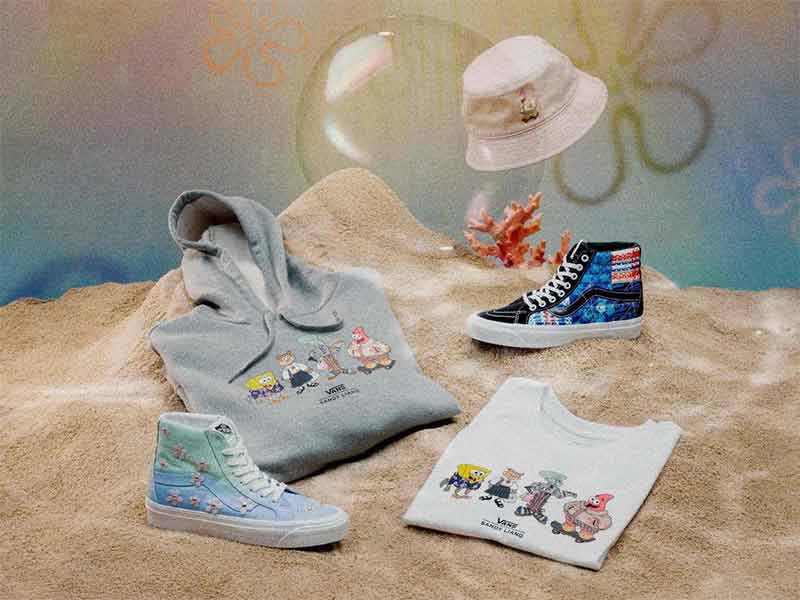 Vans, the original action sports brand and global advocate for creative expression, is proud to announce the launch of its two new collaborations, both starring characters from Nickelodeon’s ‘SpongeBob SquarePants’ series.

The first collection is a range of classic footwear, apparel and accessories for fans of all ages. The second is a collaboration with New York-based fashion designer Sandy Liang; featuring her own interpretation of the cartoon series’ signature characters and elements.

Key items in the Vans x SpongeBob SquarePants collection include an Old Skool; decorated with a side panel featuring the Checkerboard motif and SpongeBob alongside his trusty mascot, Gary the snail, hidden between the squares and finished with a yellow leather Sidestripe and the slogan «Off The Wall» written in a font identical to that of the popular and beloved animated series. Three T-shirts have been included, a short sleeve Imaginaaation T-shirt, which pays homage to the third season episode in which SpongeBob and Patrick use their creativity to play with an empty box; a long sleeve woven Airbrush Woven T-shirt, which includes the characters and other elements of Bikini Bottom. Thirdly, we find a round neck T-shirt with tye dye effect Jump Out featuring SpongeBob jumping for joy.

On the other hand, a Best Buddies hoodie has been designed, which includes a custom «Vans Off The Wall» graphic on the sleeve; inspired by the characters of the series. And to finish off the first capsule, Patricio Estrella lives up to his name as the protagonist of his own mini backpack, to which he brings his silhouette and which is complemented by the iconic Vans Checkerboard design. 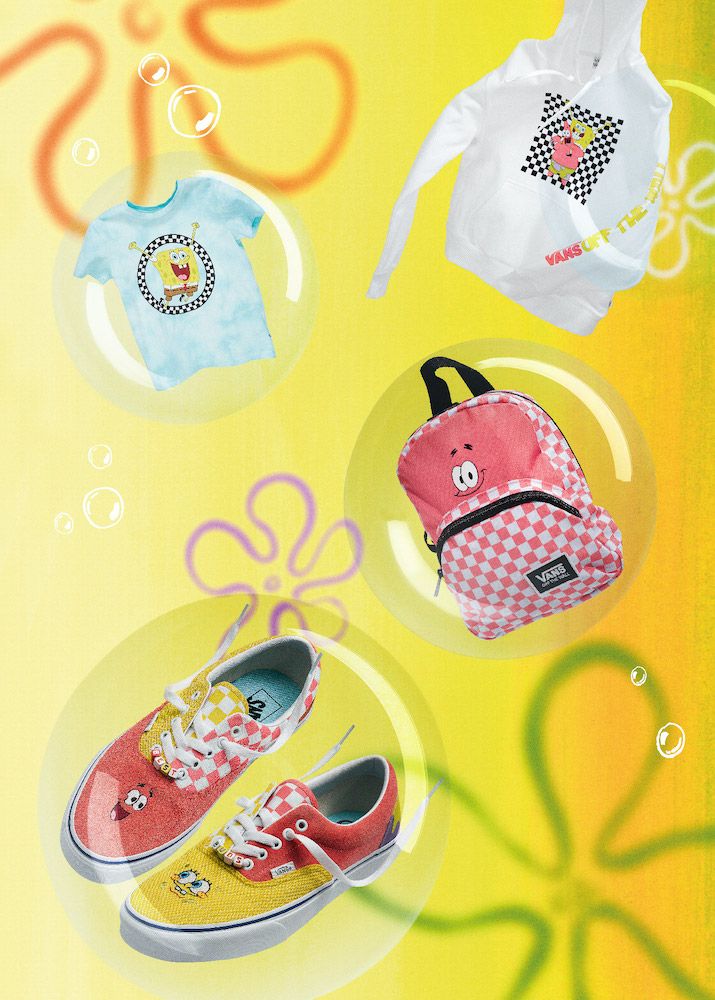 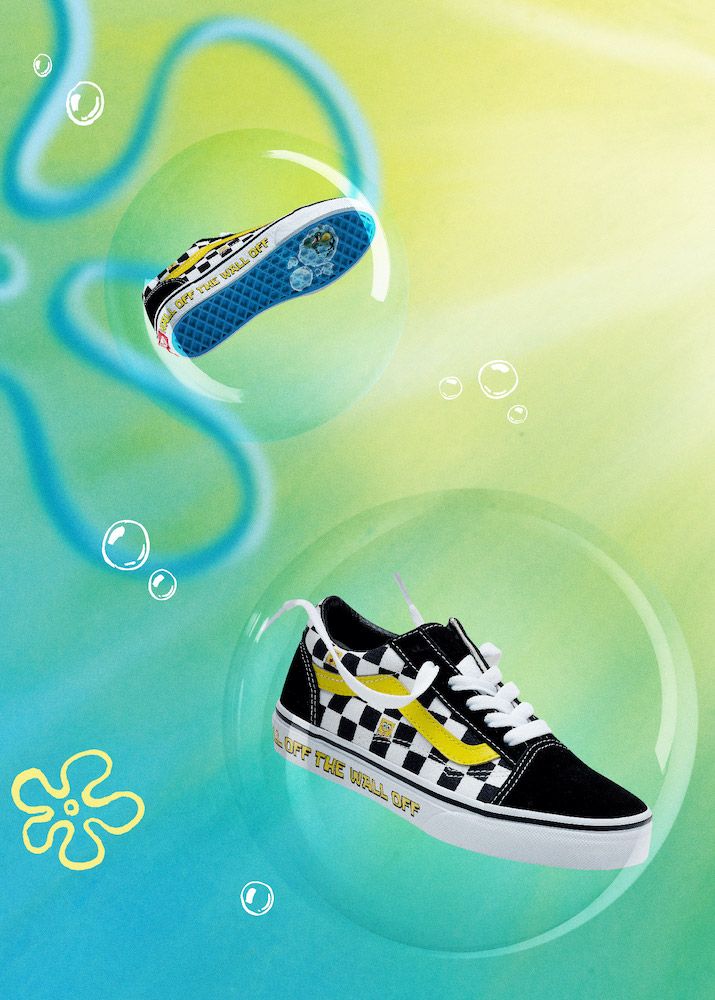 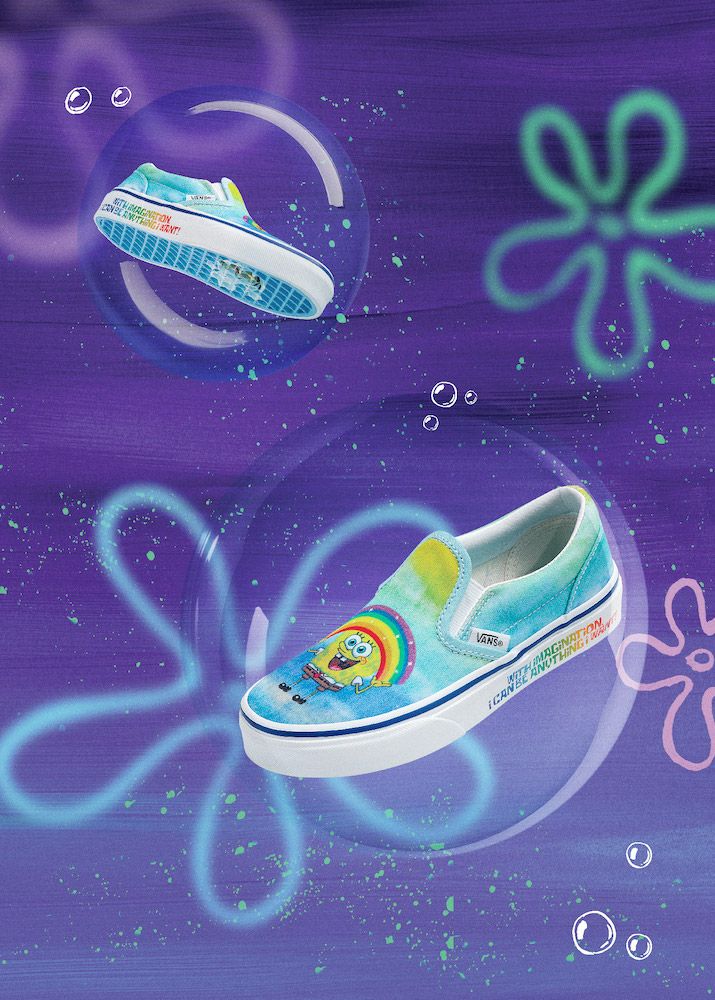 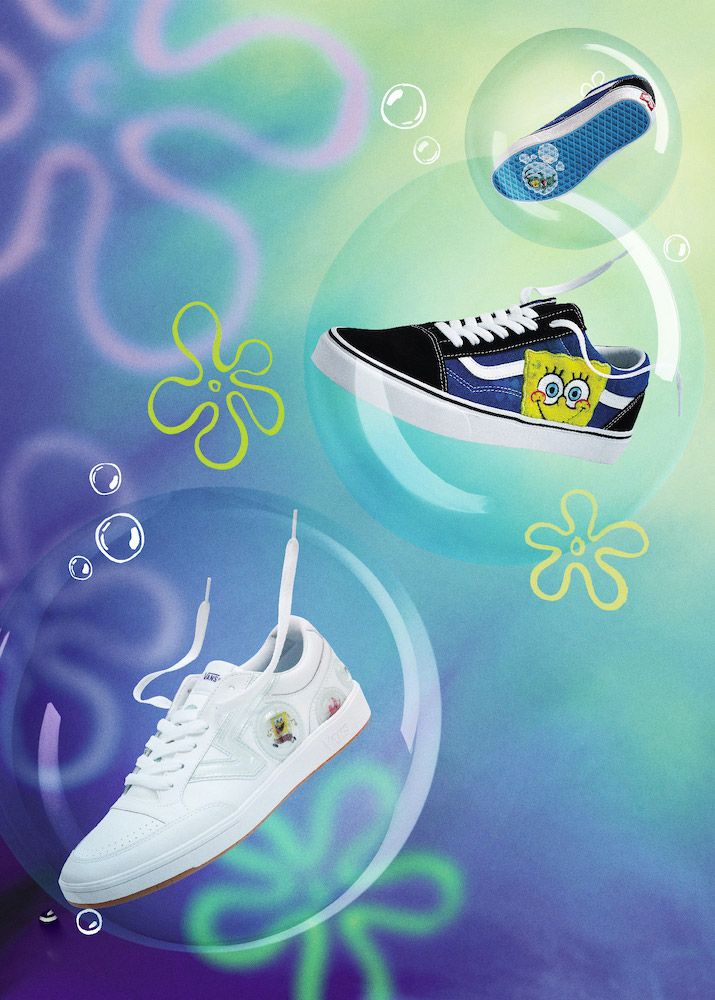 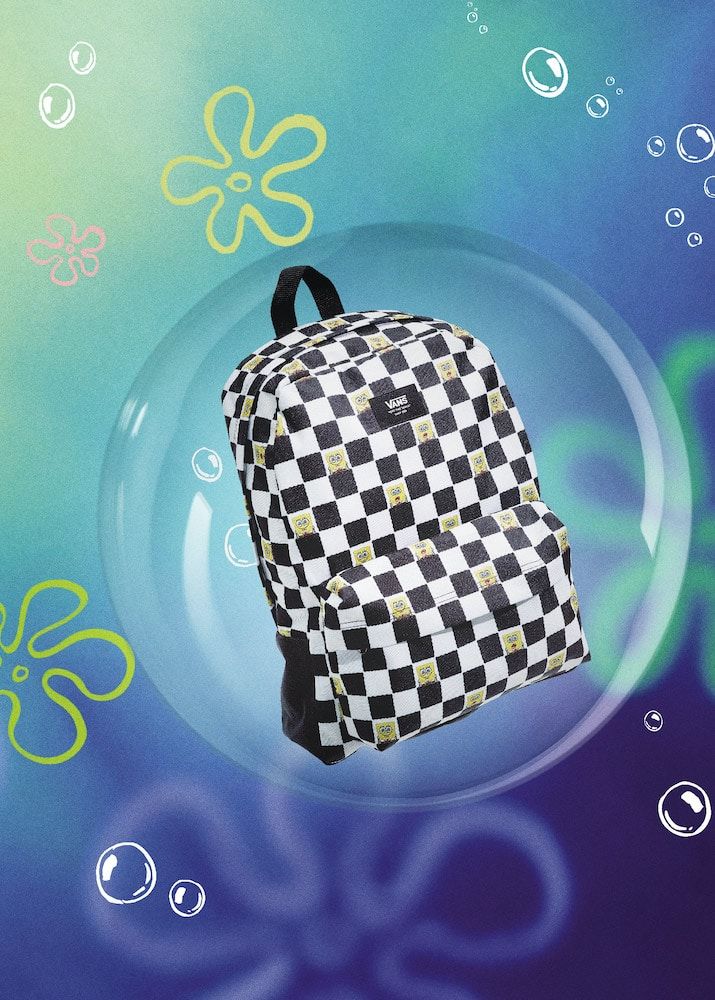 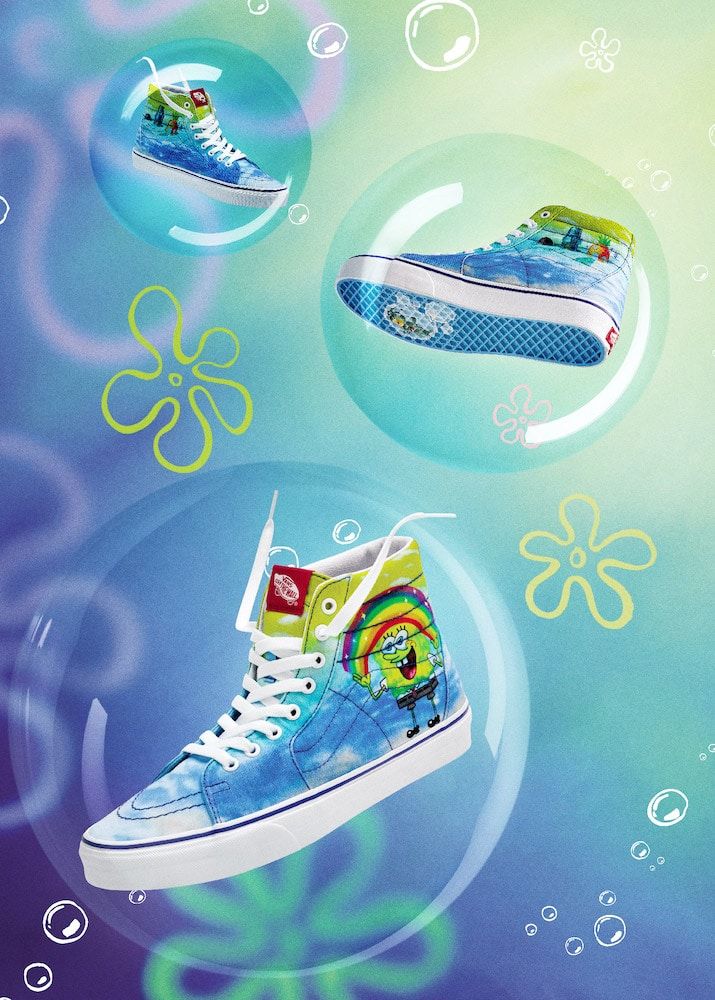 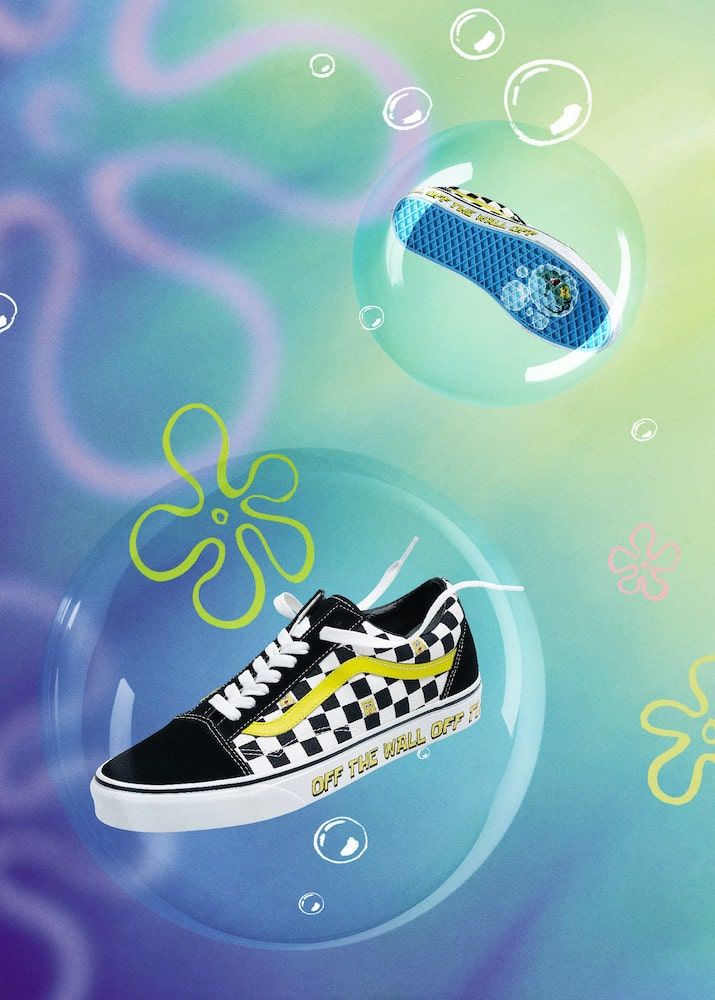 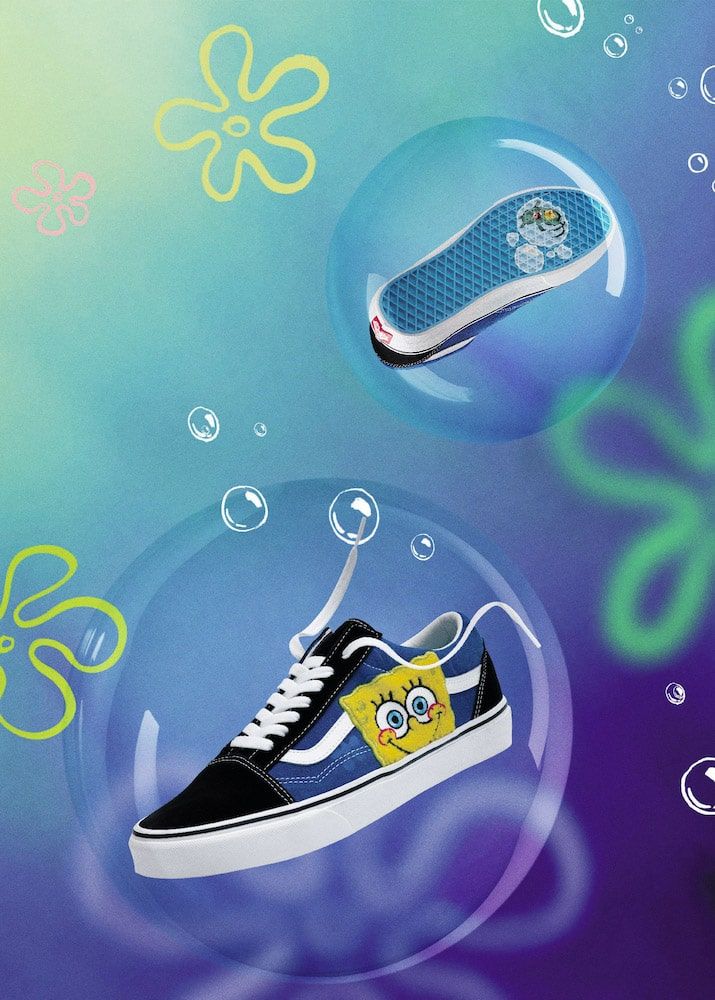 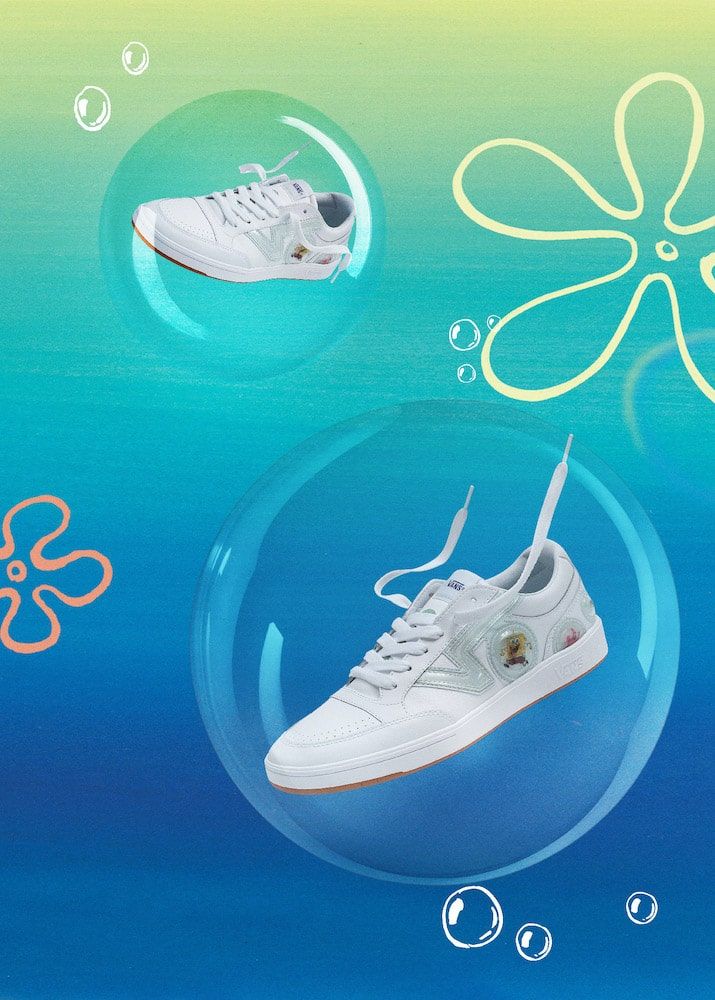 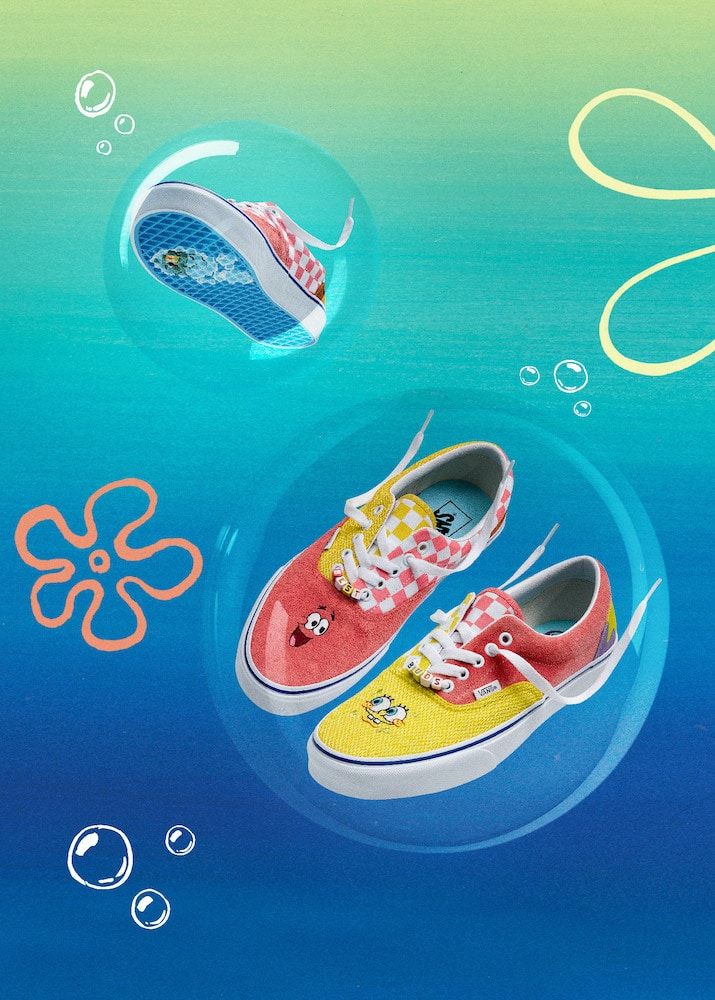 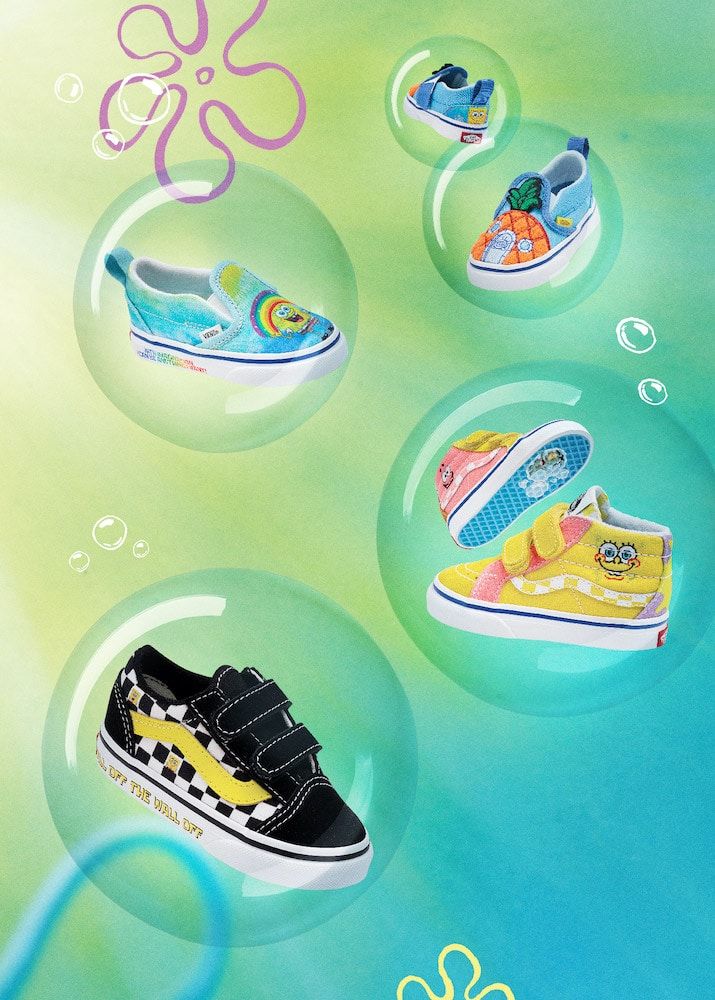 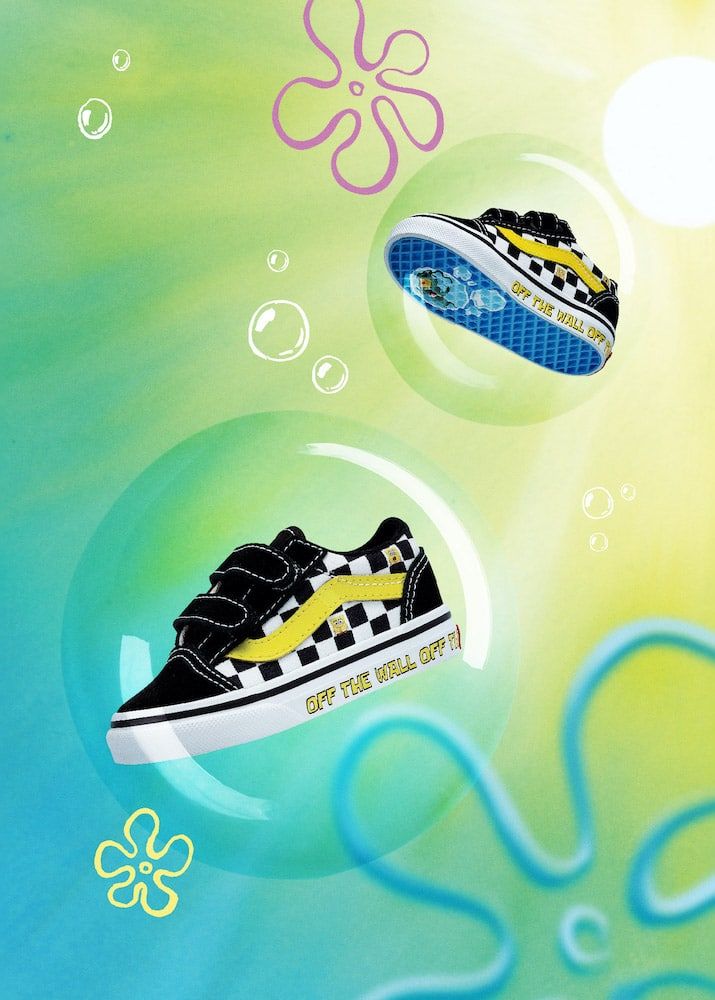 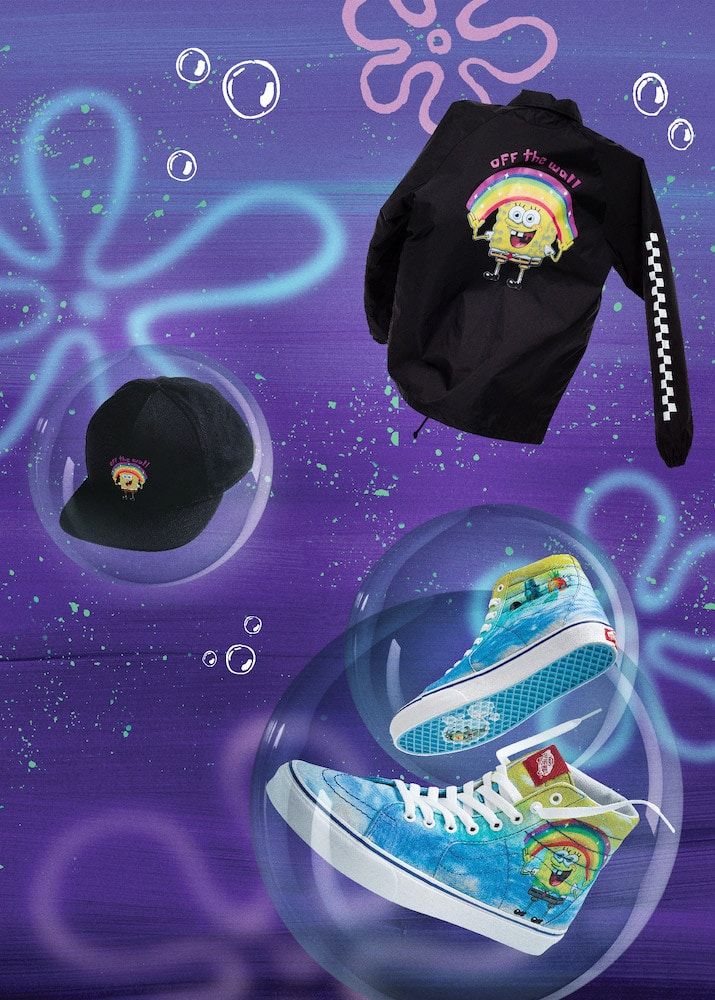 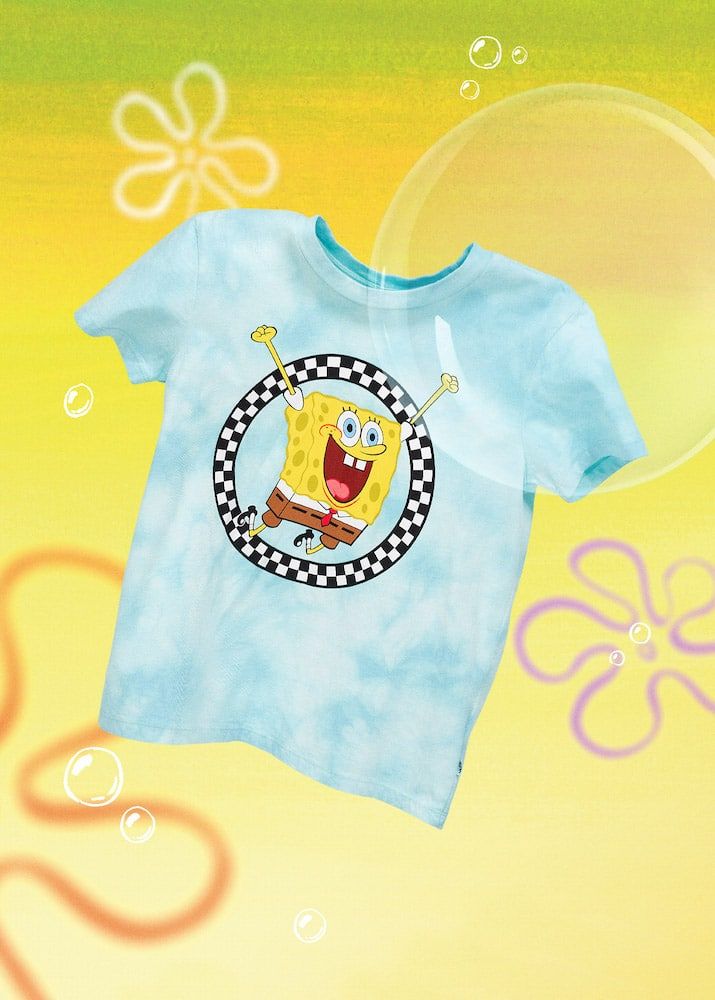 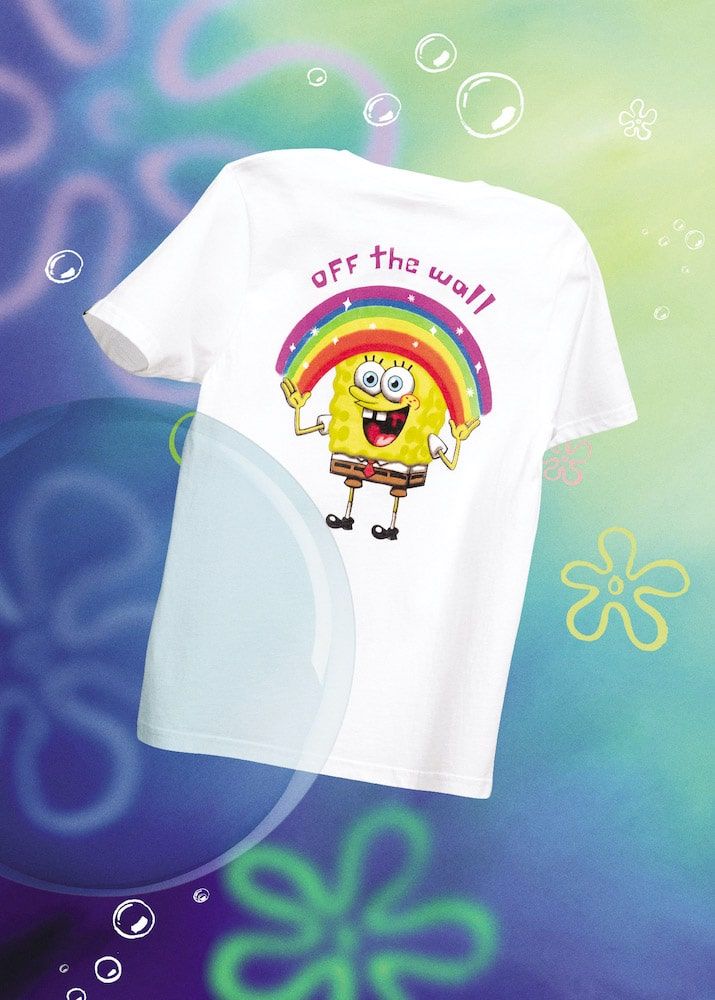 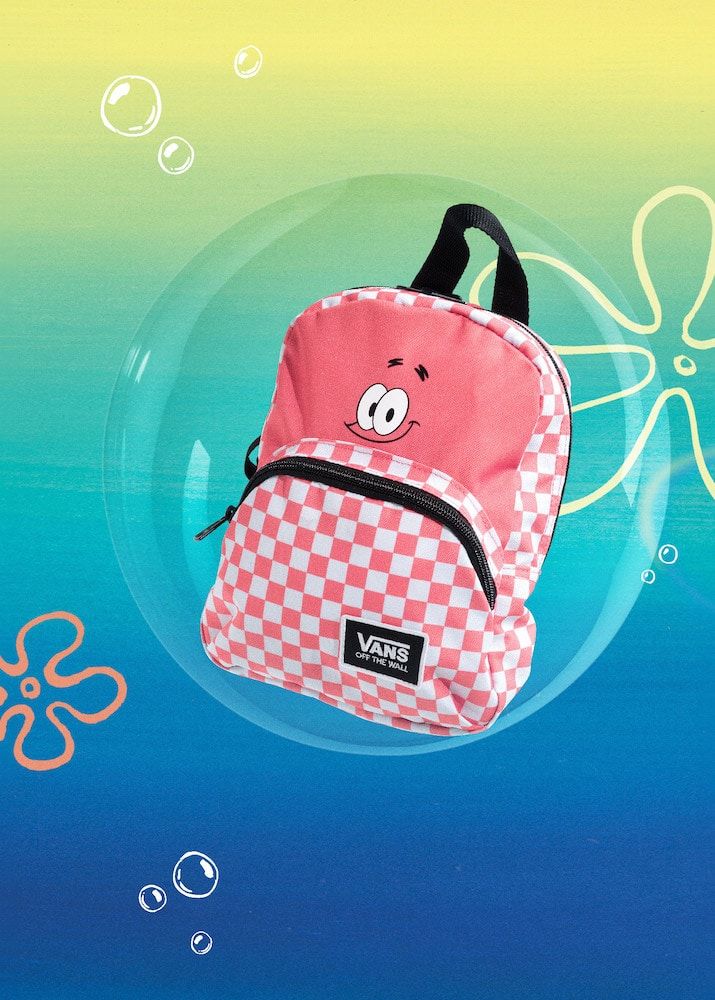 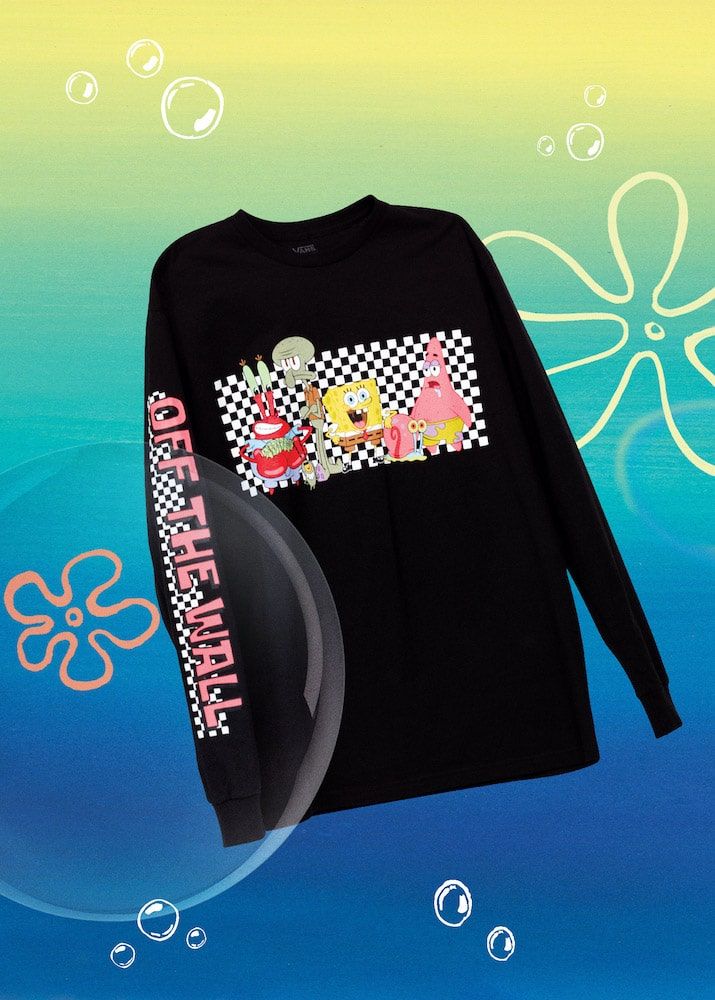 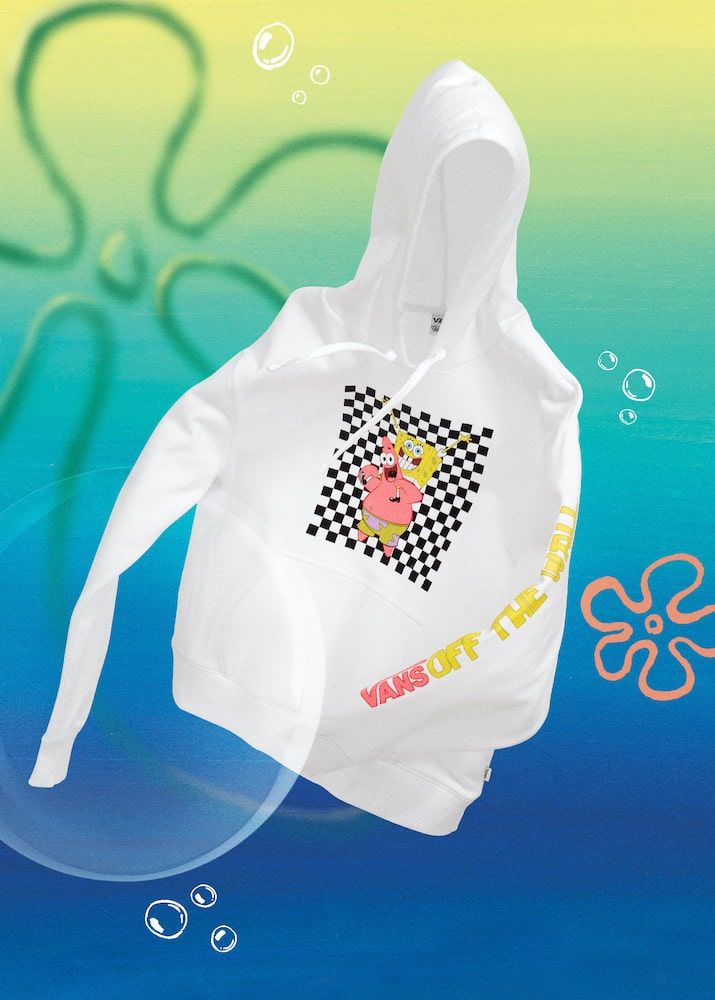 For the second collection, Vans has partnered with fashion designer Sandy Liang; who has been a fan of the celebrated animated series since her childhood. Sandy, who founded her eponymous brand of ready-to-wear clothing; jewelry and accessories inspired by her childhood, adolescence, New York nostalgia and humor; has partnered with Vans to create a capsule collection that reinterprets iconic elements of the TV series that the designer herself has illustrated to offer a renewed vision of SpongeBob SquarePants in an avant-garde key.

The Vans x SpongeBob SquarePants collection by Sandy Liang includes various elements such as two versions of the popular Sk8-Hi 38 DX sneaker. The first features a patchwork appliqué on the side panel of the high top upper; inspired by Vans’ Checkerboard print. Sandy draws inspiration from her Chinese heritage and juxtaposes a classic checkerboard print with designs of the flower-shaped clouds and other fantastical motifs characteristic of the animated series. The second design pays homage to Sandy Cheeks, the multi-talented, adventure-loving scientist. This high-top model features premium leather uppers in a gradient blue tone with delicate floral appliqués; referencing the flower Sandy wears on the top of her diving suit.

The collection is rounded out with three apparel items and an assortment of accessories featuring Sandy, Squidward, Patrick and SpongeBob reinterpreted in classic Liang styles. Included are custom fuzzy clogs for SpongeBob and Checkboard pants for Squidward. 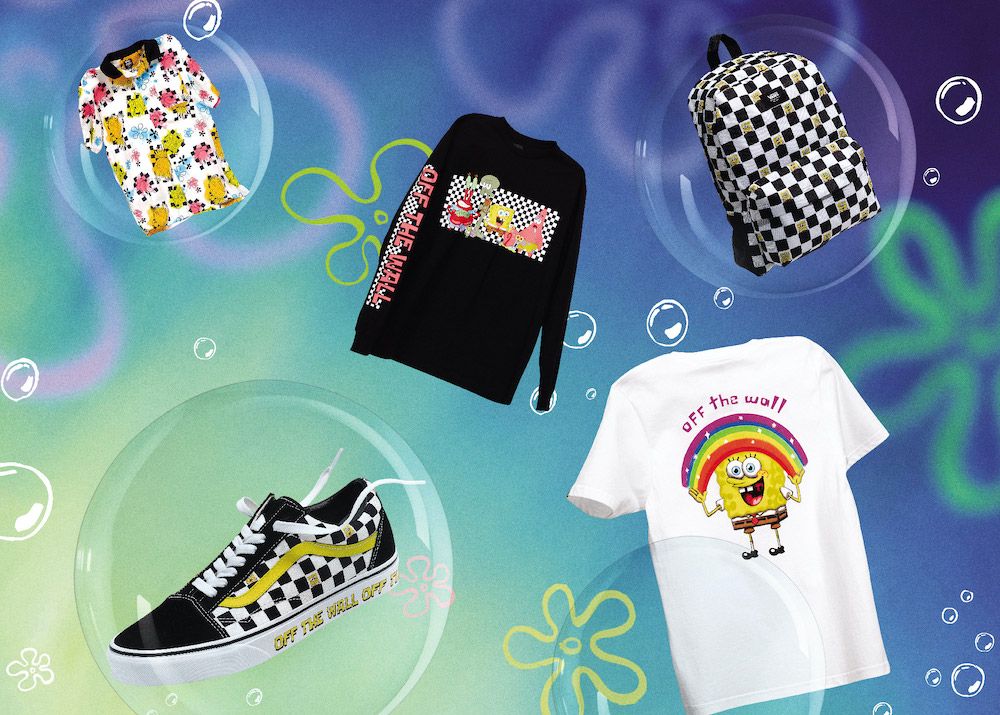 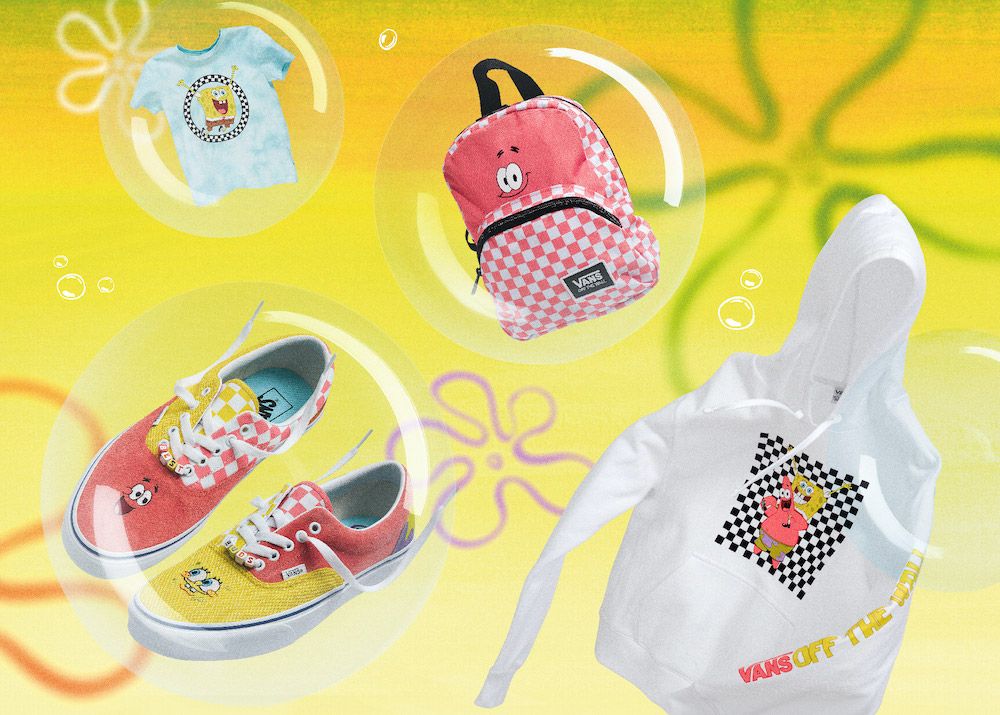 The Vans x SpongeBob SquarePants collection for men, women and kids as well as the capsule collection designed by Sandy Lang are now available online and in Vans stores.

Visit our website and find out the latest news about fashion, music, culture and lifestyle.