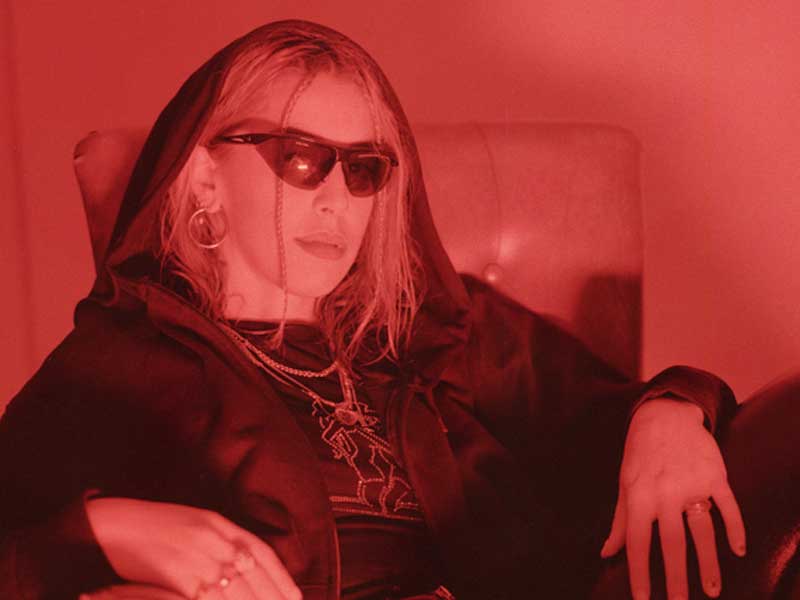 Ana Sting’s (@ana_sting) first shots with disposable cameras already immersed us in her exciting creative imaginary in which she has captured moments turning them into eternal and developing a transcendental energy that has positioned her as a woman and activist referent in the current scene. 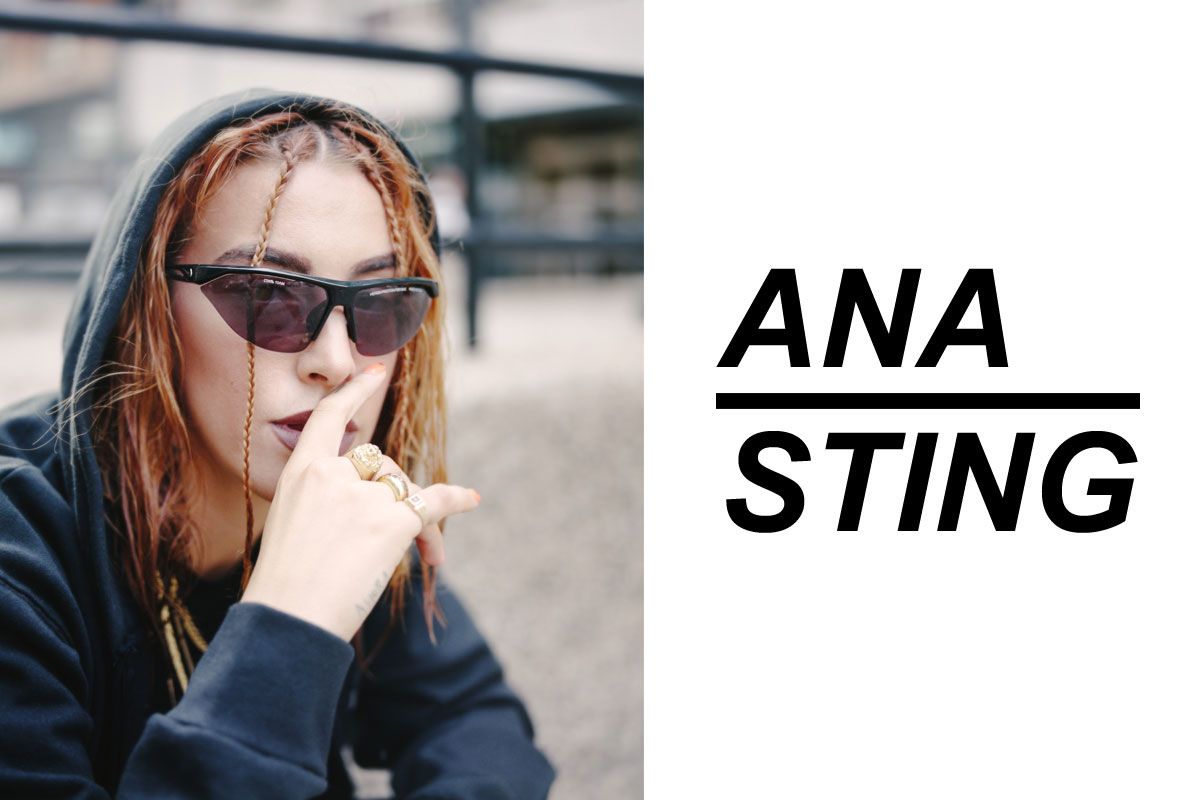 From projects that advocate sustainable fashion, the fight against the climate crisis, to empowering their muses through their dream filters. Sting reincarnates art in all its aspects as a photographer, stylist and creative director who explores issues of sexuality, power and emotions. It gives way to snapshots that interact between light and darkness in a conversation that talks about fashion, sorority, art or music.

The new artistic wave under her lens, which has in its background singers like Rosalía, Aleesha or Jorja Smith, campaigns for Armani or Stella Mccartney, as well as snapshots that reflect her connection with nature: a place of escape from the social anxiety that invades us.

We talk through the film ‘10 minutes with Ana Sting‘, directed by @byleguard,  with the artist to take us on an astral journey through her life, mind, inspiration and opinions of transgression. Keep your eyes open.

H.- Your first memories with a camera. What did photography convey to you at the time and what now?

Ana Sting (AS) – They ask me this question quite a lot and it’s very funny because, ever since I was a little girl, my mother used to buy me throwaway cameras, the classic plastic ones, and took pictures of my friends. I was seven or eight years old and I remember that I made myself like the ‘buseta’ with the sandwich, the potatoes… and the camera. I have a lot of photos, of my friends, posing, Spice Girls moment, etc.

I loved taking pictures of animals, monuments… and I have a lot of albums from when I was that, from eight to twelve years old, all the time without stopping. It transmitted to me, I don’t know, I think that more fun, the memories of your friends, was a little curious … Already since I was little I noticed a lot in things and now I think that obviously is much more professional.

H.-  After countless fascinating works such as photographing Stella Mccartney’s campaign against cancer or directing an Armani fashion film for Hercules Universal, which project have been most vibrant with your artistic career?

AS – The one I vibrated with the most, that is to say, the one I really was most excited about, because they gave me 100% freedom to create and present the project, was Jorja Smith. I remember a lot about this project from last year, which we created thanks to a super cool team. We were able to take some amazing photos and I’m super proud of those photos, and I think it’s been one of the most viral photos I’ve ever taken, so… obviously Stella is very personal, it’s beautiful and I love to do projects that are so supportive, but I think Jorja’s is very special. 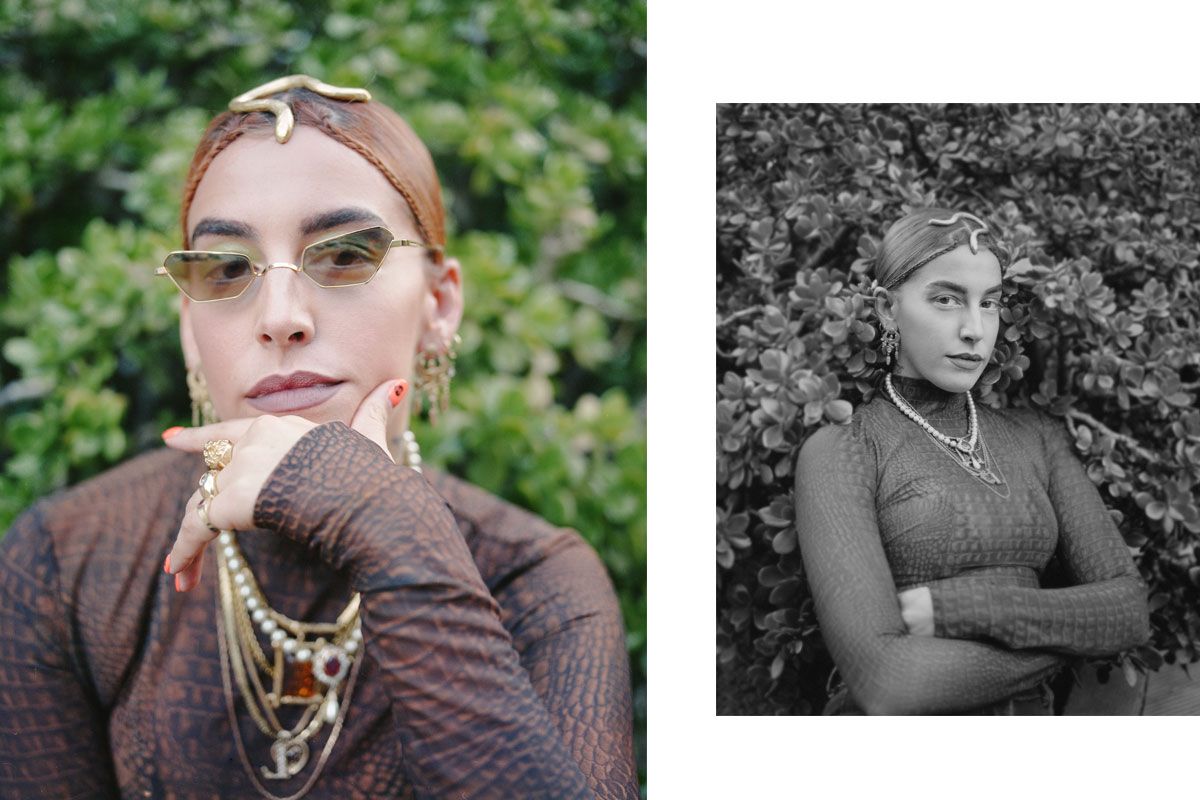 H.-  After ranging from styling and photography to artistic direction, what does Ana Sting still have to do about the future?

AS – I think that I have left exploring myself… I have done dancing all my life, I have sung all my life, I have done body expression… I have something inside that I need to get out. It would be something more personal, more autobiographical, and I don’t think I take it out because it scares me. When you touch the wound and go to deeper things, I think sometimes it’s complicated exposing your art.

When you do something a little more superficial you don’t care as much about what people say, but when you’re exposing your feelings, when you’re sharing your traumas and your stories at the same time is extremely rewarding because you find people who have gone through it as you have or are in the same process, it’s quite hard. So I believe, I hope and I wish that I can get what I have inside of me because I need it, as personal therapy, as curative therapy. So… stay tunned bitches 😉

H.-  We see how in your pictures or writings in IG you advocate for sustainable fashion and the empowerment of women, both through your own activism and your muses. Could your shots be considered a platform for advocacy?

AS – I always try to give the energy I put into my work a message. I mean, I am becoming more and more aware that my energy and everything I project outwards has to have a message, it has to have something that inspires the people who are seeing me. I think I’m done with the phase of doing something superficial or something nice for the sake of it; I do have a message, and if it’s true that I think it comes out alone, I’ve been guided by nature and I have a very strong connection that I think we are the whole, you know? 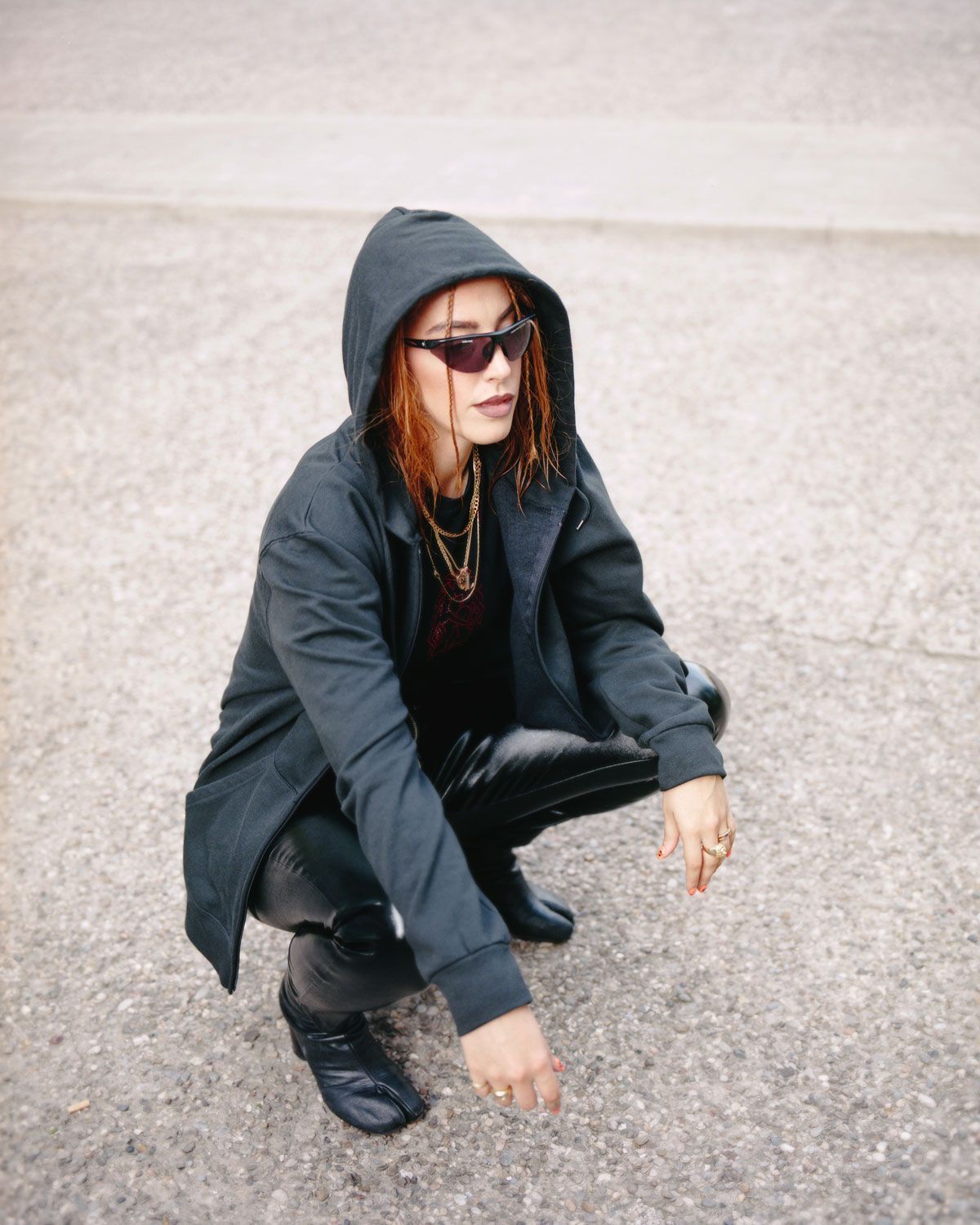 H.-  How has it influenced the creative scene in every country you’ve lived in at work?

AS – I don’t think I could say that every country has inspired me or had repercussions in some way, I just think that travelling, meeting people from other places, from other cultures, having to fight a little to speak the language, to get to know the city, to make friends… I think that’s what’s the hardest. Then this is obviously reflected in your work, but I wouldn’t know how to tell you specifically how each city has contributed to me.

H.-  Your dream shooting. With who and where would it be?

H.-  Your collaboration with artists that are setting the guidelines of the current scene such as Bad Gyal, C. Tangana, Jorja Smith, Aleesha, Rosalía or Ibeyi has become another one of your highlights. What is the connection between Ana Sting and music?

AS – Well, actually everything, because since I was little I’ve listened to music at home. My father was a musician, he was the guitarist of an 80’s rock band. Music has always been very important in every trip, everywhere. I’ve always been educated very well musically, and I’m very grateful that it has had such a solid base, because I know a lot of bands, and from there I think it’s also something that you already live, when your parents are that sensitive and they like a certain type of culture or music you absorb it since you’re a little kid.

Music is something that comes very direct, when you’re on stage you don’t want to know the energy and emotion that should be felt, when you share your voice and your words with the audience. I love collaborating with artists, although it’s a little more difficult than working with models, but I like working with musicians because you can feel the creativity, you can feel the sensitivity and personality of each one. 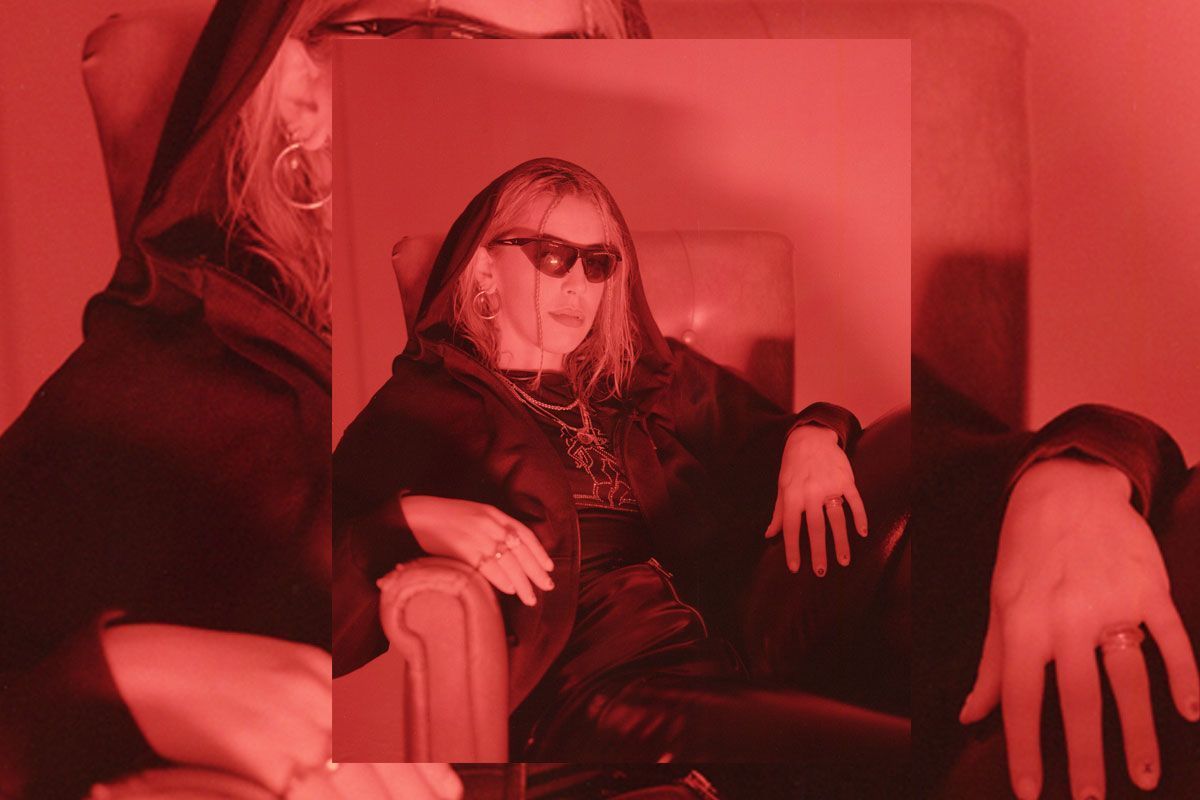 H.-  Your photos are like neo-baroque works of art in which chiaroscuro and tenebrism dialogue in an eternal conversation. Which artists or works have inspired your photographs to create that own photographic style that has transcended in the Post-Tumblr era?

AS – I can be quite inspired by any worldly situation, anything I can see in the street, music, smells… everything inspires me to create something, and I think I have a rather romantic and melancholic view of life, which makes me use certain colors or a certain type of light. But if it’s true that there have been artists who inspire me a lot, for example directors such as Fellini or Wes Anderson, I love them. Films that have marked me could be ‘Sayat Nova’ or ‘The Tales of Hoffmann’, and above all artists like Louise Bourgeois. I really like that the art is quite autobiographical and that you can relate the artistic piece with the biography of the person, I think it communicates much more and inspires me a lot.

H.-  How do fashion and nature interact in your photography?

AS –As I said before, I was born surrounded by nature. I had a grandfather who had a house on the coast, he had an orchard and since he always explained to me every fruit, every tree, then that was very personal. For me nature is the only space I go to when I need to find myself again, to find peace… for me nature is everything, my cradle in some way.

The relationship with fashion, I don’t know, I think I always want to wear something organic, something real, and I think something more real than nature, for me there is nothing. So, I try to interact one thing with the other, I also think it makes it more sensitive, more conscious in some way.

I think that when you do things in an irrelevant way or in a commercial way, you put aside many aspects that are very important. We have to take into account that fashion comes out of nature, and that thanks to nature we get materials with which we can dress, I think it’s incredible, and that we should take care of that, because the source runs out and we should be more intelligent. I reckon the next generations or the present generations should use their creativity to explore that field and see what we can do with the resources that we already have or how we can do it in a way that exploits lesser natural resources.

H.-  Explain the concept of ‘The Nalgas Party’. How does this party update Barcelona’s nightlife?

AS –Our group of friends love music and we are all related to music, art, fashion… and we believe that Barcelona needed a party that really supported the underground scene and new things from the city, from Spain, from outside… and we just sat down and we did it. I think we all have good contacts and the people who know us believe in the project. And I can’t tell more, but it’s going to be the next party.

The Lacoste rebirth by Louise Trotter
We talk W/ Selam X, the studio that’s designing the future
We talk w/ Adriana Roslin
Motoguo | The Wes Anderson of Fashion
The future of 3D fashion through Cattytay
We talk w/ Cali Thornill DeWitt (@caramelbobby)
Charles Jeffrey LOVERBOY | FROM THE CLUB TO THE CATWALK
The babushka boom
The hypersexualized man is back
The smash of latin music
The ecstasy of live streaming in China
Stay tunned in fashion and beauty with NAYVA