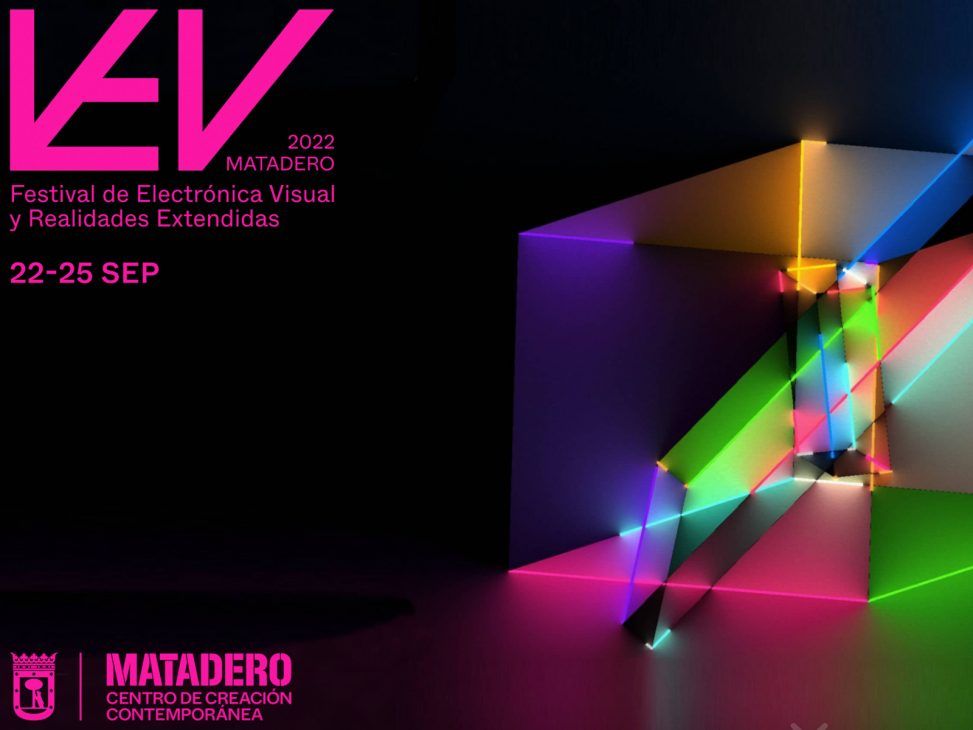 All the information about the fourth edition of L.E.V. Matadero

From 22 to 25 September, the L.E.V. festival will bring together a surprising selection of experimental projects in the fields of electronic music, audiovisual creation and contemporary digital art at Matadero Madrid. 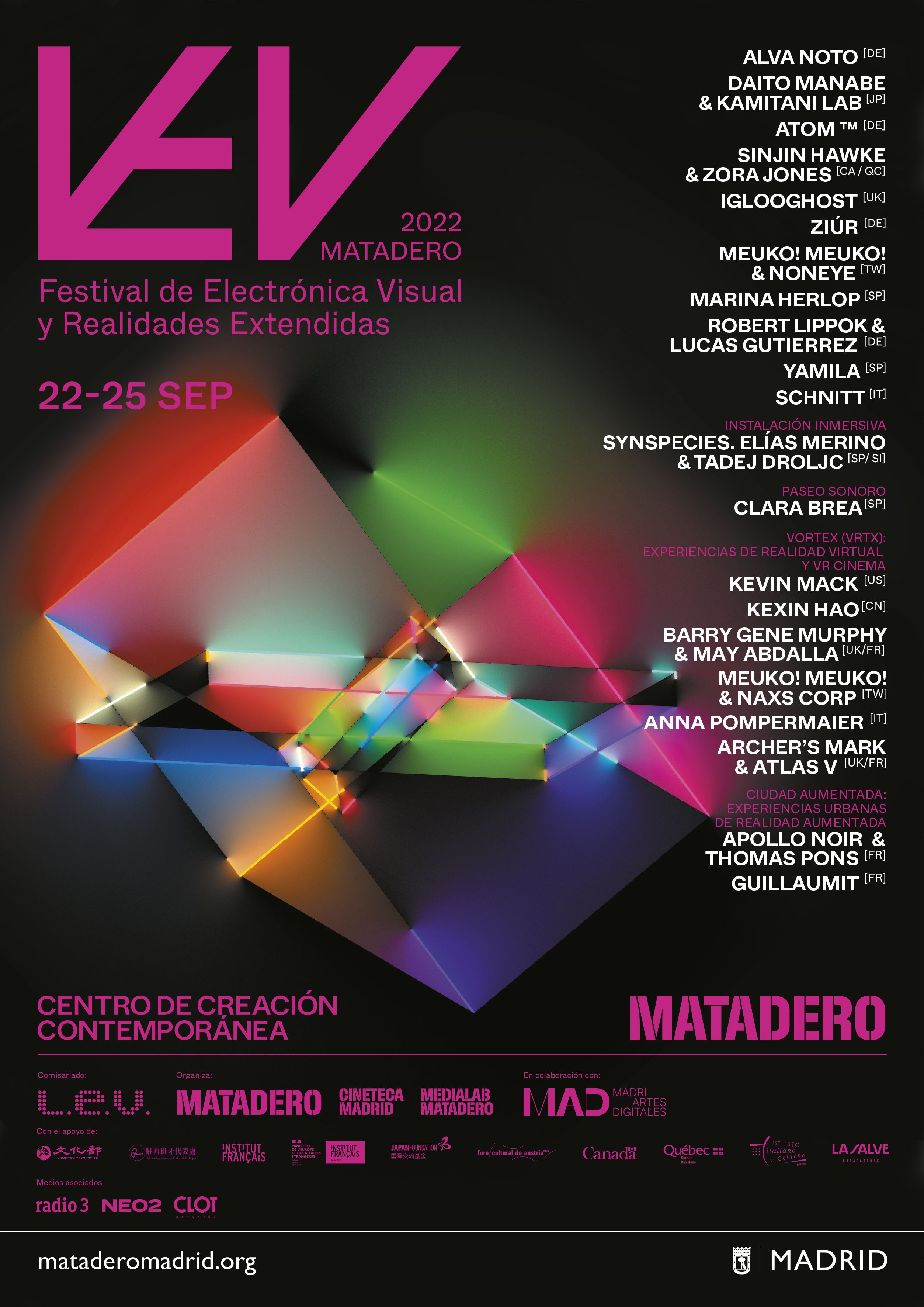 After announcing its programme of concerts and audiovisual performances headed by artists of the stature of the acclaimed German composer Alva Noto; the multi-award-winning Japanese artist Daito Manabe; the unstoppable Catalan composer Marina Herlop or the recent incorporation to the line-up of the essential of the Berlin experimental scene Ziúr; as well as the participation in this edition of the MAD (Madrid Artes Digitales) space with a large-format inverse installation; the festival now presents the virtual reality and augmented reality experiences that will make up the Vortex (VRTX) and Augmented City sections.

In addition, within the framework of this new edition of L.E.V. Matadero, the exhibition Metaversos: Realities in Transition opens in Nave 0. Alongside the exhibition, an action-installation in the form of a sound walk by Clara Brea, resident in 2021 at the Matadero Artistic Residency Centre, and a training and informative programme organised together with Medialab Matadero on virtual spaces and experimental sound creation, complete the programme of this edition.

The Vortex (VRTX) section of this fourth edition of L.E.V. Matadero offers six unusual virtual reality art proposals. Among them is Anandala, an abstract and virtual world of captivating three-dimensional shapes and colours populated by intelligent artificial life. Created by the pioneer of inverse art Kevin Mack, this universe offers visitors the ability to explore its surprising nature in flight and interact and connect with the curious and friendly beings that inhabit it.

With Meet Me Halfway, Italian architect, artist and engineer Anna Pompermaier creates a multiplayer extended reality experience that investigates what the meeting places of the future will be like, located within hybrid environments between the physical and the digital. Showcasing an example of these new meeting spaces, the animated virtual reality experience Goliath: Playing With Reality, created by Anagram, directed by Barry Gene Murphy and May Abdalia, and narrated by actress Tilda Swinton, guides the visitor through the different realities of Goliath; a man who has spent many years of his life isolated in psychiatric institutions and who connects with the outside world through multiplayer video games.

The Future Dance of Nostalgia project investigates how our bodies related to the hard, repetitive physical labour of the pre-industrial era. A video game created by Beijing-based virtual artist and designer Kexin Hao; it combines work songs drawn from historical archives and the dynamics of games like Just Dance. Taipei-based experimental artist and producer Meuko! Meuko! and Taiwanese collective NAXS Corp present Innervision. This is a virtual reality installation version of their Ghost Island series. A virtual post-utopian 3D landscape located on the border between the mythological and the real.

In addition, the impatient virtual reality documentary On the Morning You Wake (To the End of the World) from multi-award winning studios Archer’s Mark and Atlas V will immerse the viewer in a terrible event that took place in January 2018 in Hawaii; when residents received an SMS from the state emergency service mistakenly warning of an imminent ballistic missile attack on the country.

In this edition, L.E.V. Matadero proposes a new augmented reality experience for the outdoor space of the Placita. Created by the French animation director and illustrator Guillaumit, the piece Livelyyy is represented in the form of a mural and hides a hectic inner life that is revealed through the screen of our smartphone. A fragile and rich 3D ecosystem that the author invites us not only to discover, but also to take care of.

The Sala Plató at Cineteca will host (Un)related to God by the French duo formed by the musician and producer Apollo Noir and the filmmaker and designer Thomas Pons. A multidimensional experience that reflects on the capacity of human beings to create their own destiny, through an exhibition of paintings and objects that are activated by augmented reality. With the support of the Institut Français in Paris, this project will also serve as a milestone for the presentation of the new international networking project Sensor/PLAY, promoted by the Semibreve festival in Braga (Portugal), L.E.V and Maintenant in Rennes (France).

As part of this year’s festival, Matadero Madrid and L.E.V. are inaugurating the exhibition Metaverses: realities in transition, which is based on the premise that virtual environments are a reality that is increasingly present in our lives. With the support of the Ministry of Culture of Taiwan; the Taipei Economic and Cultural Office in Spain; and the Austrian Cultural Forum, the exhibition brings together a selection of five metaverses, plus a generative installation, developed by and for artists and promoted by various cultural institutions.

This tour offers visitors an approach to the idea of metaverse, far removed from commercial virtual spaces. An invitation to discover new territories of artistic experimentation in an inverse way; to travel through surprising aesthetic universes halfway between fiscality and virtuality; and to discover the inexhaustible creative possibilities of this technological medium.

The title of this exhibition comes from the recently selected Creative Europe project Realities in Transition, of which the L.E.V. festival is a participating partner, and which addresses common issues at European level in the growing development of metaverses, with the aim of promoting open source, sustainable, accessible and diverse alternatives.

In continuity with the events developed in previous editions dedicated to communities and working groups with an interest in extended reality, initiated in 2020 with the metaverse Planet L.E.V. Matadero, the festival organises this year, in collaboration with Medialab Matadero, a workshop on experimental sound design for inverse spaces, given by Thomas Aussenac and Arthur Vincent from the Sound Object project; and a series of presentations open to the public in which some of the artists participating in this edition will talk about their creative processes in virtual environments.

In addition, on Sunday 25 September, the artist Clara Brea will present, under the name Madrid Concrete, a sound collage made up of field recordings of the city, recorded during her time at the Matadero Art Residency Centre in 2021. In this piece, which will be heard for the first time through wireless headphones, Clara Brea portrays and re-imagines the soundscape of Madrid to immerse the listener in the roar of its gears.

Get your tickets and season tickets for L.E.V Matadero by clicking here.