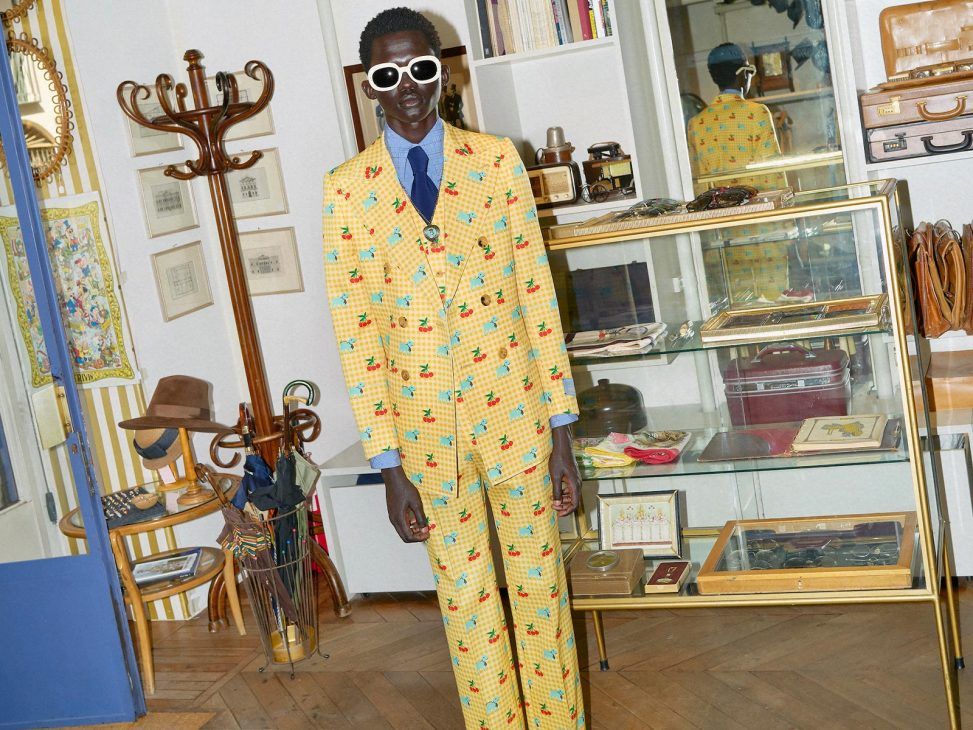 Gucci HA HA HA: A collection born of complicityFriendship, complicity, coalescence of disparate creativities that share borders, exchanges and contamination of collective ideas. And the absolute pragmatism of choosing bridges that connect different perspectives. Gucci HA HA HA is a collection that is the culmination of an ingenious journey between two. The synthesis of the friendship that unites Alessandro Michele and Harry Styles. 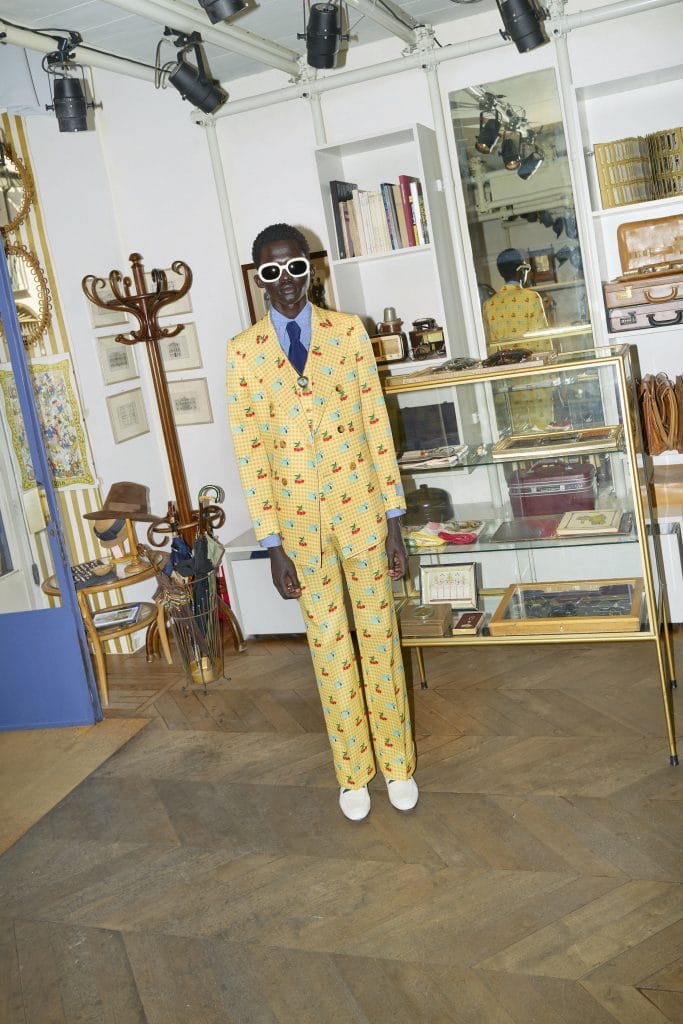 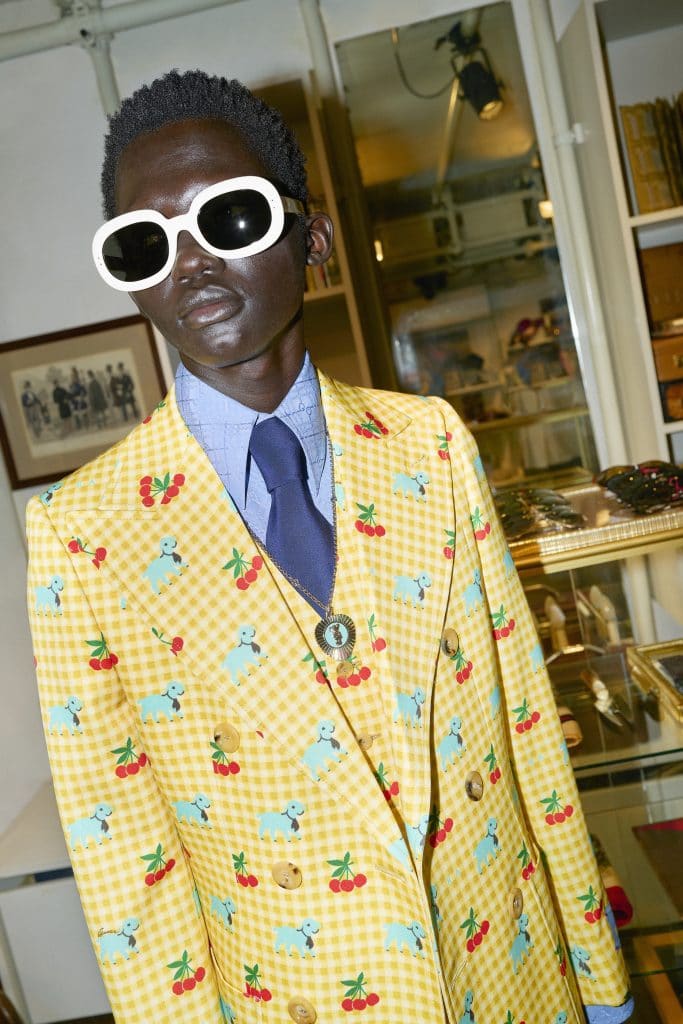 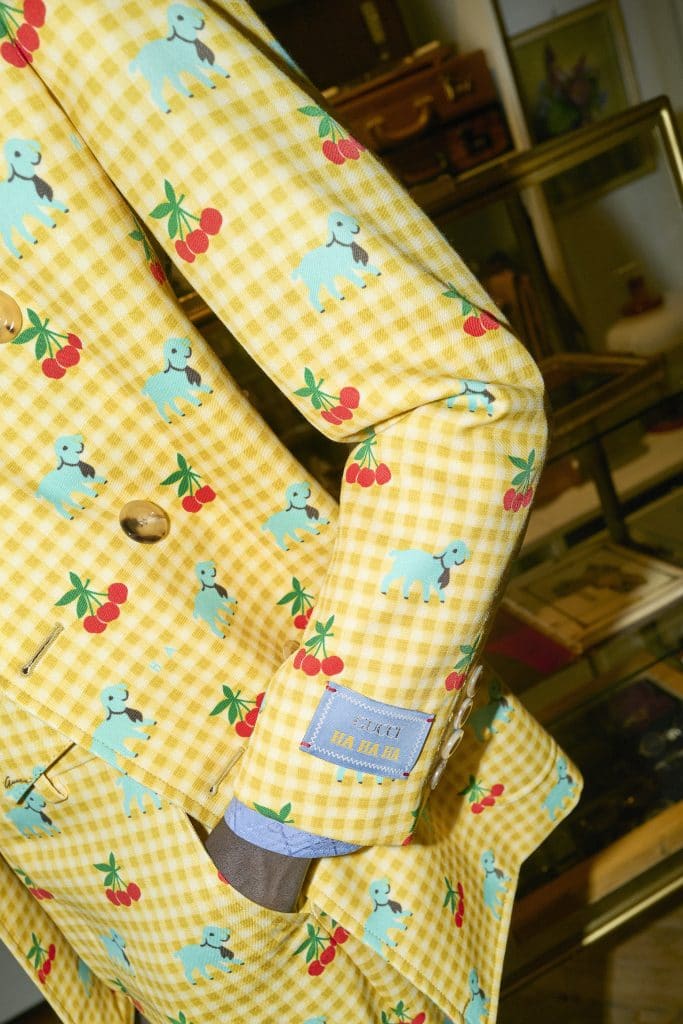 Gucci HA HA HA is not just a motif stamped on a label, but the genesis of a yet-to-be-categorised slang that defines the intersection between creative expression and the perception of two distinct consciousnesses. And as such, it is a collection that is the fruit of a creative relationship born of fun and concludes with a tangible product.

HA HA HA is the serial synthesis of the initials of ‘Harry’ and ‘Alessandro’. But it is also the onomatopoeic sound of the written essence of the ‘laugh out loud’ emoji. In fact, it is precisely this neologism –‘hahaha’– that Michele and Styles have been using for two years as a closing formula for the messages they exchange; two friends who share travels, experiences and even that time in suspension that results from cohabiting spaces in silence. The complicity that unites them gives rise to continuous exchanges as they recover the true moral meaning of friendship; a sincere act of revelation and devotion of oneself to another, without hypocrisy or boasting of power.

Alessandro Michele and Harry Styles met many years ago, at the very beginning of their solo careers. Michele had just made his debut as creative director of Gucci and Styles had just released his first album. It didn’t take long for a relationship of exchange, constant creative contamination and a thirst for exploration to develop.

“Harry has an incredible fashion sense. Contemplating his ability to combine items of clothing in an unconventional way in the face of established standards of taste and common sense and homogenisation of appearance led me to understand that the styling of a look is a generator of difference and power. So are his reactions to the designs I have created for him and which he has always made his own. Reactions that invariably generate in me an outburst of freedom. The idea of working together came to me one day while we were talking on the phone; I proposed to him to create a ‘dream wardrobe’ with him, starting with those little quirks that take shape in our childhood visions. We ended up creating a mix of aesthetics. From pop and bohemian seventies fashion to a revision of gentleman’s style in a subverted evocation of men’s tailoring,” says Alessandro Michele. 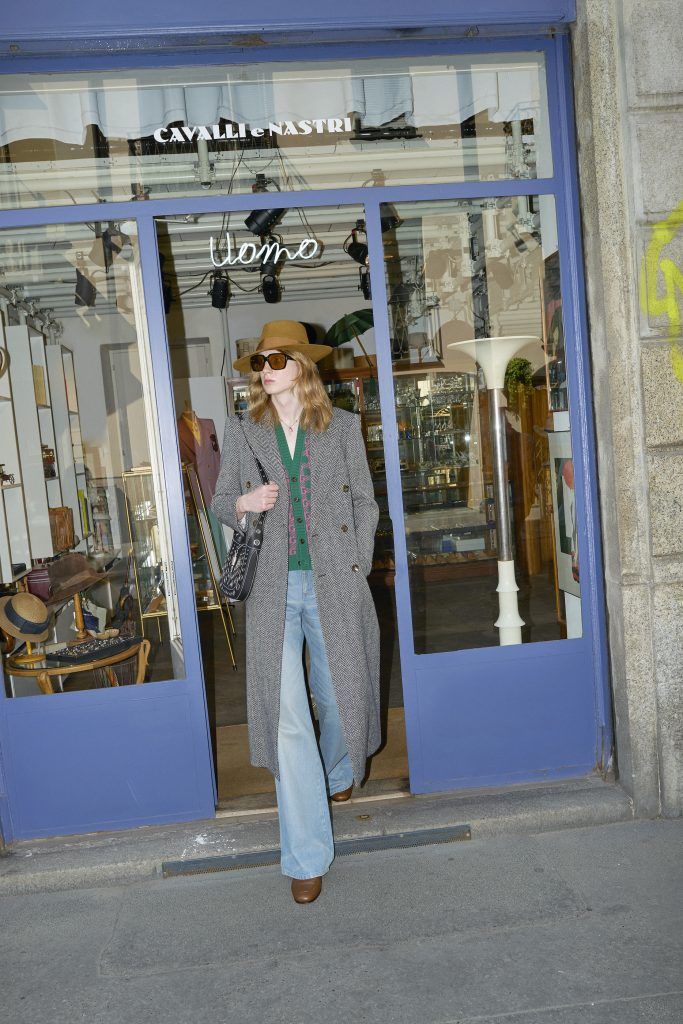 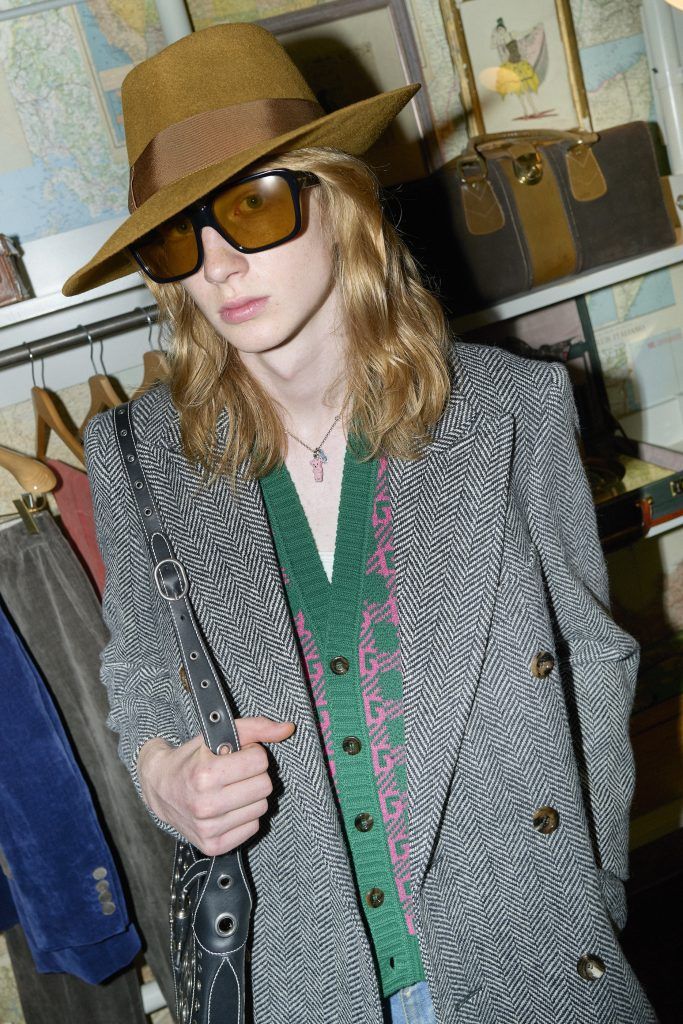 Gucci HA HA HA is a fun collection designed as a herald of new concepts of beauty created on the basis of liberating codes that banish the complexities of fashion collections. They generate the sustainable spontaneity of simplicity. That simplicity that nature demonstrates even when it expresses itself through complex perspectives.

Jackets, coats, trousers, shirts and accessories that reveal an emotive and innovative passage capable of originating a study on masculine elegance seen from a surprising approach by means of garments that declare their love both for the materials they are made of and for the historical relevance of their shapes and volumes and the images they generate.

A dialogue, a game. The complicit expression of a friendship born of a project that brings together encounters, stories, similarities and differences to give rise to liberating codes.

Gucci HA HA HA is, therefore, an imaginative connection between Alessandro Michele and Harry Styles that brings together, in a single collection, numerous elements characteristic of the creative paths and peculiarities of both artists, integrating them into the synthesis that is Gucci. Elements of English tailoring become romantic accents arising from a new concept of masculinity through the eccentric use of the Prince of Wales check on double-breasted coats and the fundamental pre-eminence of artisanal processes in the making of jackets or in the details of the lined or pearlescent shirt buttons. 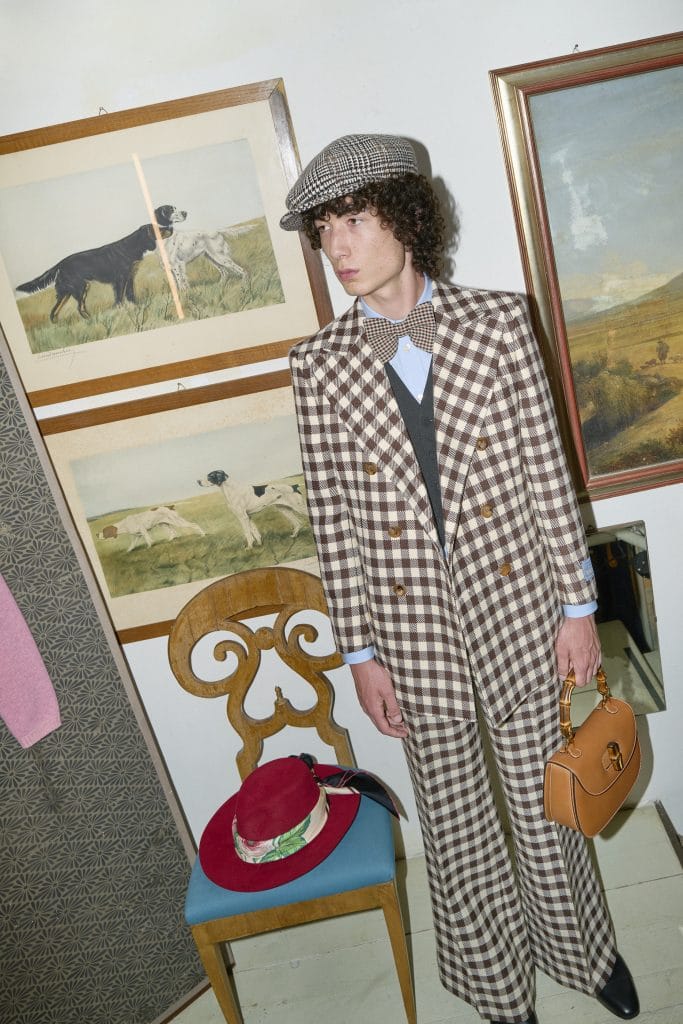 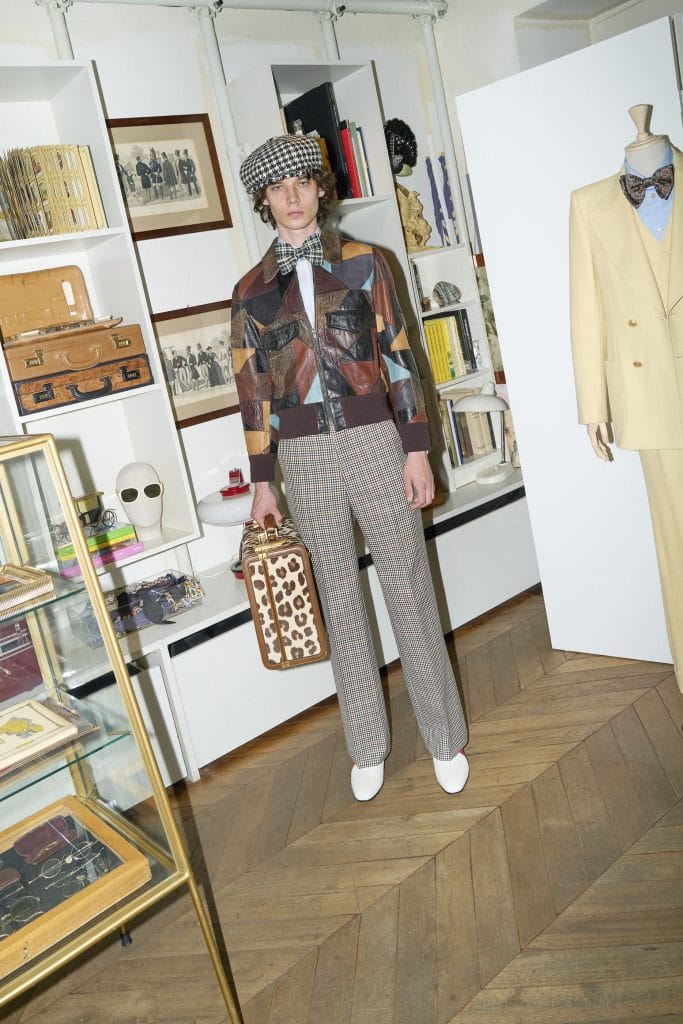 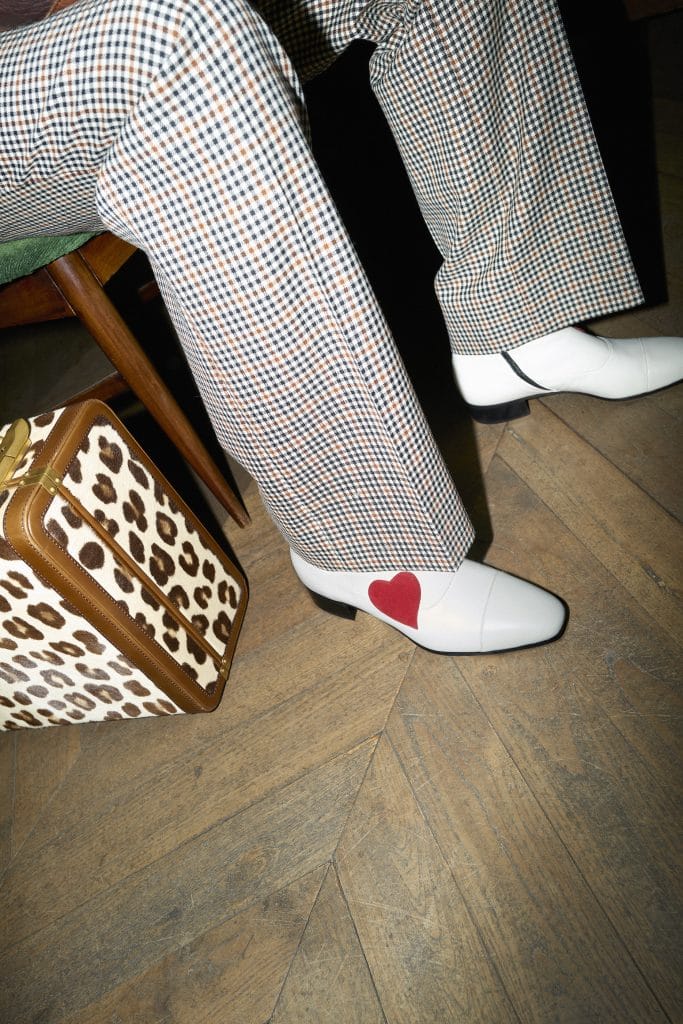 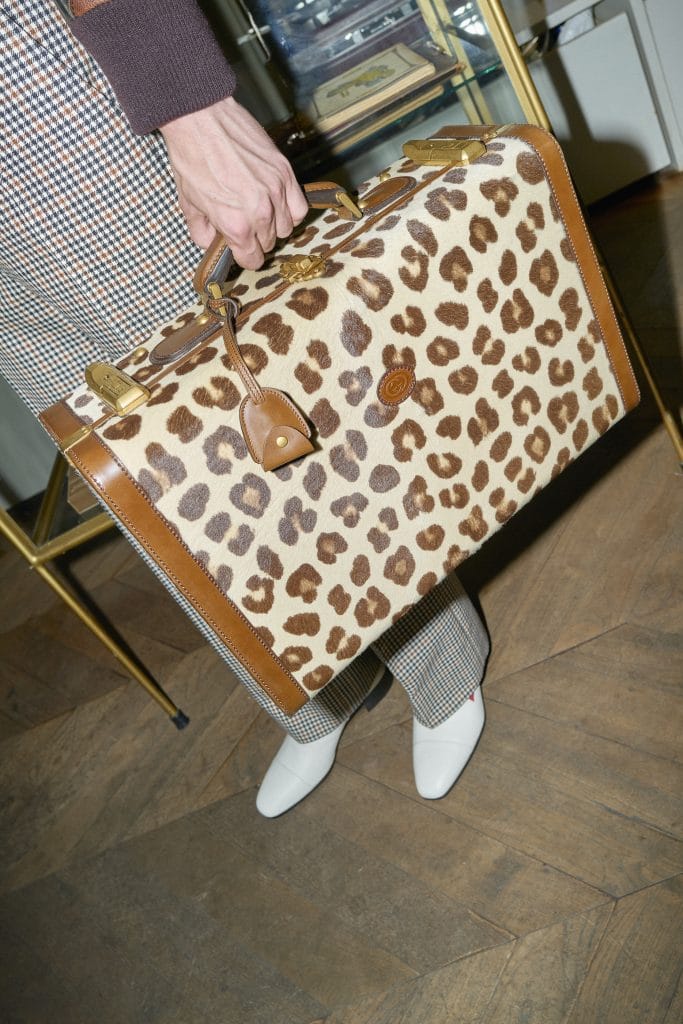 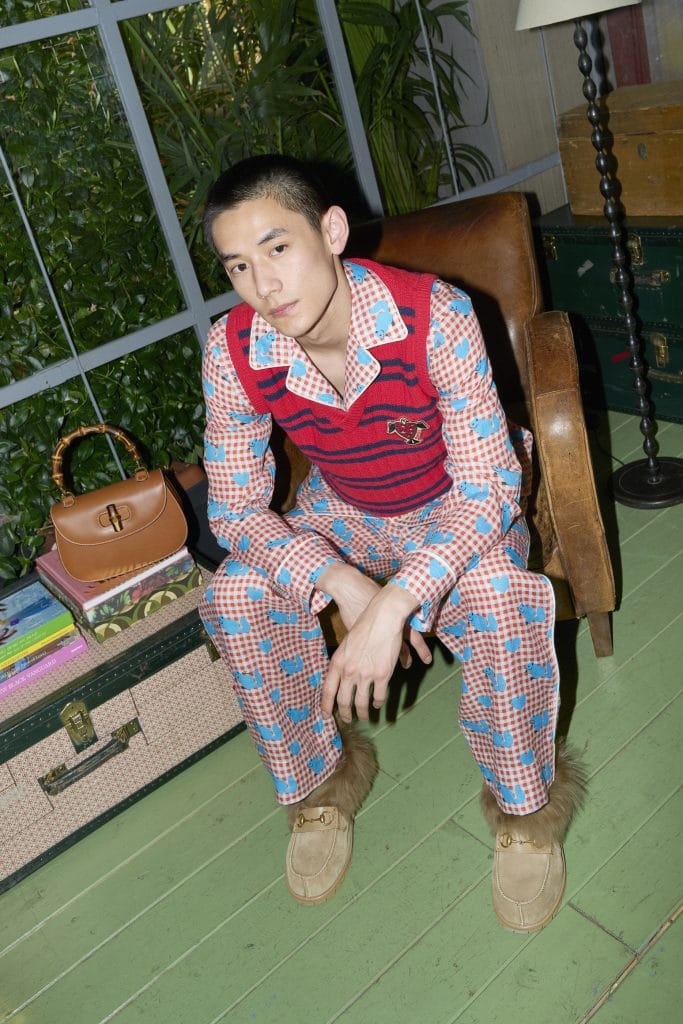 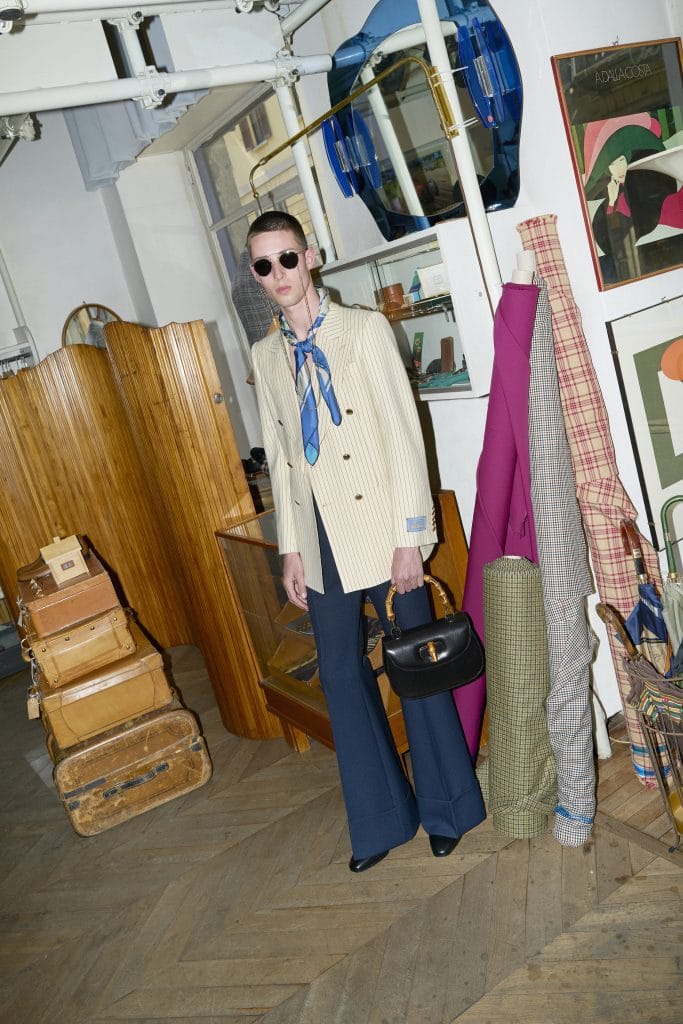 An artistic imagination born of creative acts that are applied to diverse expressions, contaminating each other and becoming garments that reflect formal changes in the historical significance of menswear; and that is why tailored suits, treated denim jackets and velvet suits in irregular shades are accompanied, surprisingly, by printed pyjamas and bowling shirts, coats with lining, hoods and Chinese knot buttoning, and plaid board skirts with adjustable leather straps. All to underline the constant presence of two creatives in each design, the hallmark of the Gucci HA HA HA collection.