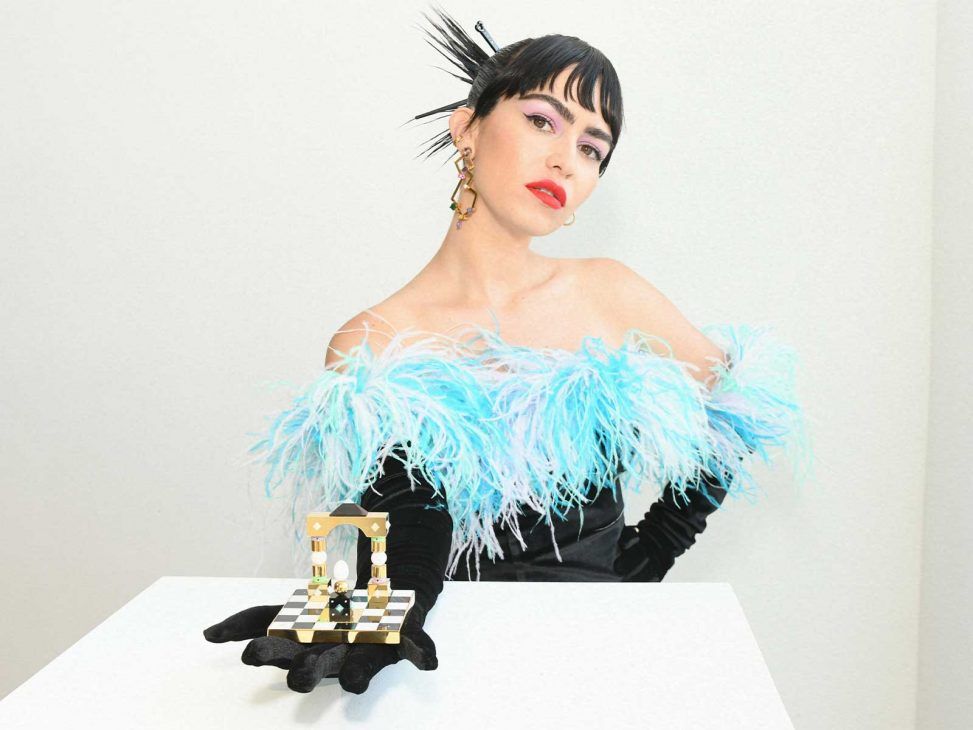 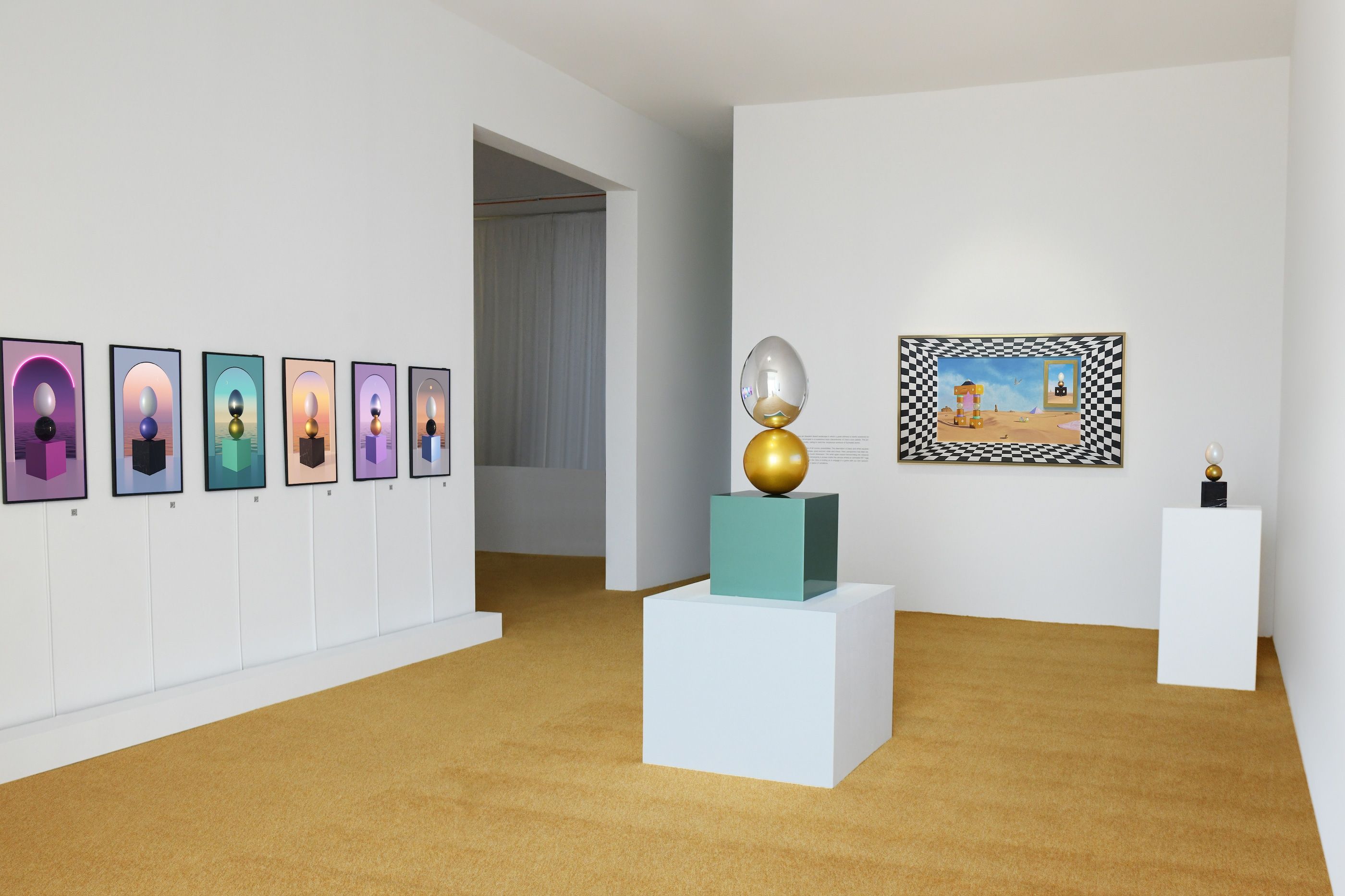 The Space of Variations is a doorway to the infinity possibilities of the quantum field; a theoretical physics concept manifesting that everything that could happen, is happening, in an infinite number of parallel universes. It is a metaphysical space located outside of perception, but just as objective, where intuitive knowledge and vision originate. All scientific discoveries and masterpieces of art are received from the Space of Variations through the subconscious and all parallel universes exist in the mind of their creator. Everything we see in reality, is realized variations.

Pilar Zeta creates intricate installations that physiologically and psychically communicate with viewers in gallery and public settings as well as digitally. Space of Variations is her first solo exhibition in the US, presented by Art Is gallery in LA, following her recent large-scale immersive artwork – Hall of Visions – commissioned by Faena Art in Miami Beach during Art Basel 2021.

The artist regards the digital medium as an expanded field reminding us that art is not confined between four walls but capable of becoming a portal to unknown realities. In the exhibition, each work of art existing as a physical object unfolds into the digital realm as an NFT work. The Argentinian-born draws from her interest in quantum physics, symbology, esoteric knowledge and a peripheral history of ideas to generate alternative interpretations of reality.

Her art is constructed on an imaginary of symbolic codes; a language of the subconscious. The aesthetic and spatial compositions weave together several temporalities – past, present and futures to come – and are rooted in Ancient architecture, surrealist painters Salvador Dalí and Sofía Bassi, or the practice of postmodern designers Studio Alchimia. 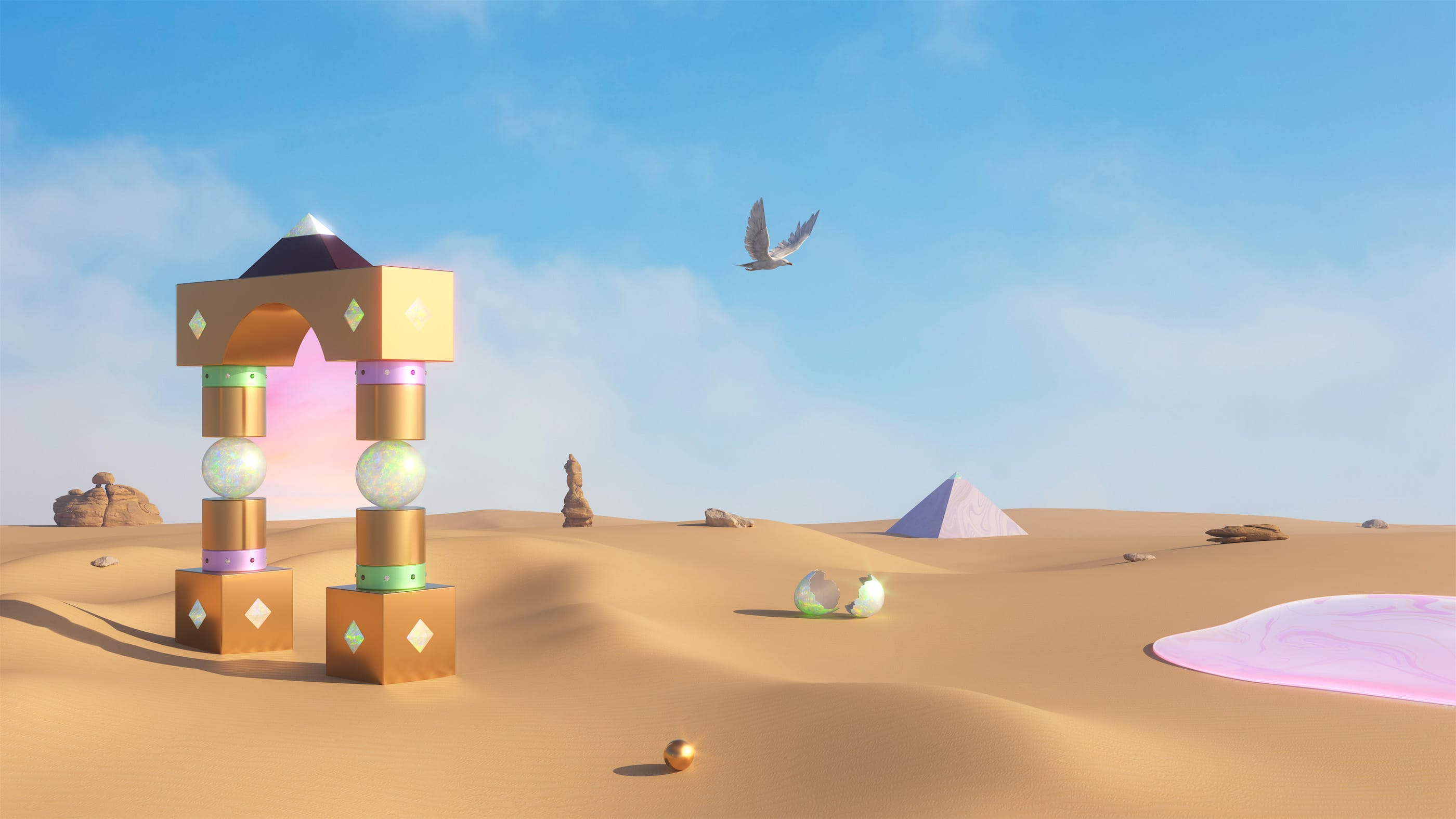 In an environment invoking its own form of ritualistic scenography, Zeta constructs a game of reflections. Her mixed-media sculptures combine different semi-precious minerals with symbolic and magical qualities such as opal, agate, jade and gold. Mirrored surfaces populate the exhibition, both concealing and revealing, protecting and exposing hidden emotions such as desire, vulnerability, intimacy. The egg takes a central place in her jewel-like totemic sculptures as well as in her otherworldly digital environments, as a universal token of rebirth and the mystery of creation of life.

Field of Visions is an oil painting depicting a welcoming yet dissident desert landscape in which a great stillness is barely sustained by delicate, brittle objects that seem alive in their immobility; enveloped in a mysterious haze characteristic of Zeta‘s color palette. The artist’s visual language coalesces in a universe of fantastical motifs, calling to mind the voluptuous contours of Surrealist works.

The scene is wrapped in a checkerboard passepartout; a symbol of all cosmic possibilities. The alternation of black and white squares is an image of the world in its fundamental dualism: light and darkness; good and evil; order and chaos. Here, perspective has been deviated to uncanny effect to create the optical illusion of entering a fourth dimension. The artist again enjoys transcending the classical painting medium by piercing the frontier of two-dimensionality and introducing a screen inside the canvas where an animated NFT egg seems to be watching its own parallel/future reality.

It could seem like Zeta is inviting us to engage in a game with our own subconscious, a fictional world devoid of imposed morals and prejudices, a space of variations. 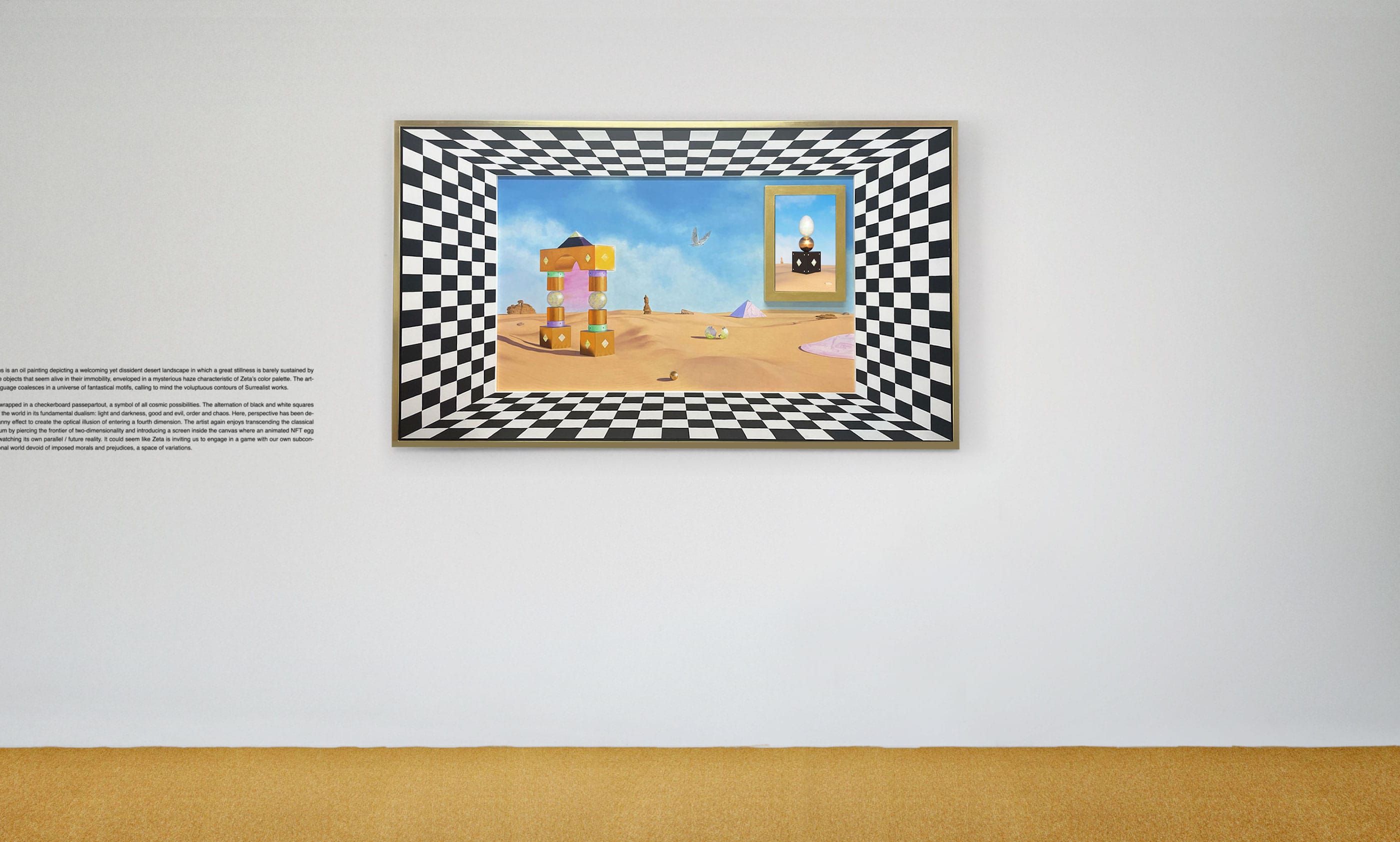 The central work in Pilar Zeta‘s Space of Variations is the sculpture Temple of Variations. Pivoting between the natural world, mythology and history, we might discern the echo of classical architecture that once inspired the pioneers of modernism, while its sharp edges, glossy surfaces and sumptuous textures evoke a sense of wonder.

Zeta is known for taking up space with pieces of very different scales. In contrast to the enormous Hall of Visions for her recent Faena Miami Beach outdoor commission, which evoked the fragility of the human bodies that walked in and around it, Temple of Variations has been scaled down to a miniature. It contains the potential to charge the way we exist in the space, engaging our senses in the installation. In order to further enhance this active presence, the sculpture becomes alive: the egg can be a portable jewel, a meeting point between the artist and the viewer.

The almost insignificant size of this work creates a tension with the imposing architecture it embodies and the powerful energy of the talismans it is built with; gold, symbol of abundance; black & white diamonds; white agate; black jade and finally opal, whose rainbow shimmer shifts with light and has long been associated with metamorphosis and the mutability of life. Pilar studies minerals for inspiration, finding in the magical qualities of these a way to channel her concerns and interests. 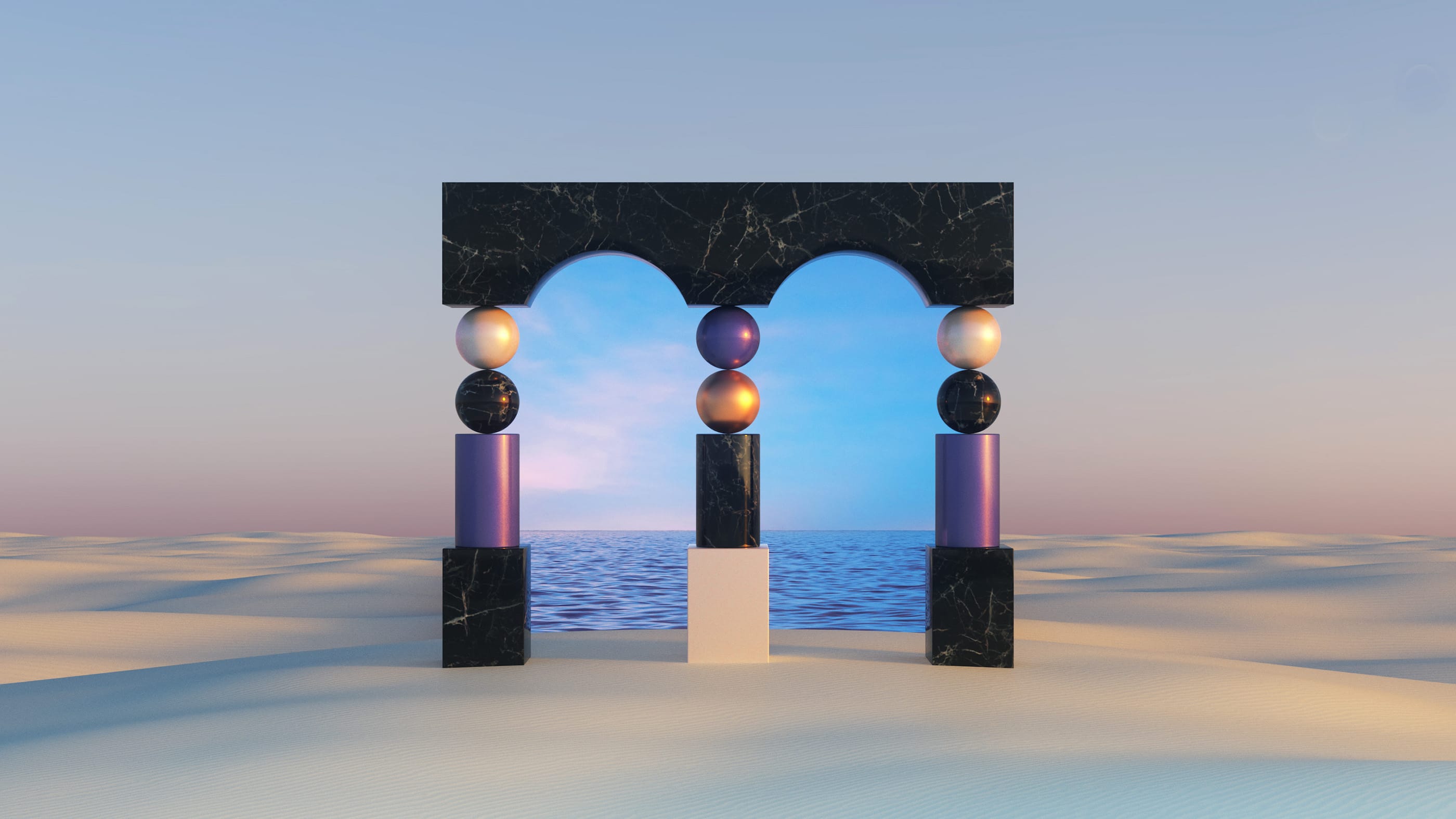 How do we move from one space to another? How do we exit and enter a space? What if there were a place that was between dimensions, that acted as a hinge between them? A brief moment, in the interstice, that constitutes a boundary, a beginning and end of two spaces. A space-time of potentialities. Pilar Zeta urges us to look once more at the representation of a portal, a transitional space, in the NFT field of possibilities, swell as in a three-dimensional sculpture Doorway to Possibilities, sitting on a checkerboard pedestal; an allegory insisting on the dualities of the self. The arch is used repetitively in her sculptures, invoking an ongoing state of transition. This polarity is echoed in the combination of “natural” and “synthetic” materials: the millenary marble, whose origin is the geological crust, contrasts with the pearl and golden car paint, an epitome of our post-industrial and technological era.

In the works Doorway to Now and Wave Function, the artist continues her exploration of the hidden and potential meanings of the digital. These could be seen as disgressions from the main or ‘proper’ physical works; but in fact her digital persona provides an essential point of engagement with the contemporary viewer and is a reflection of her thought process. 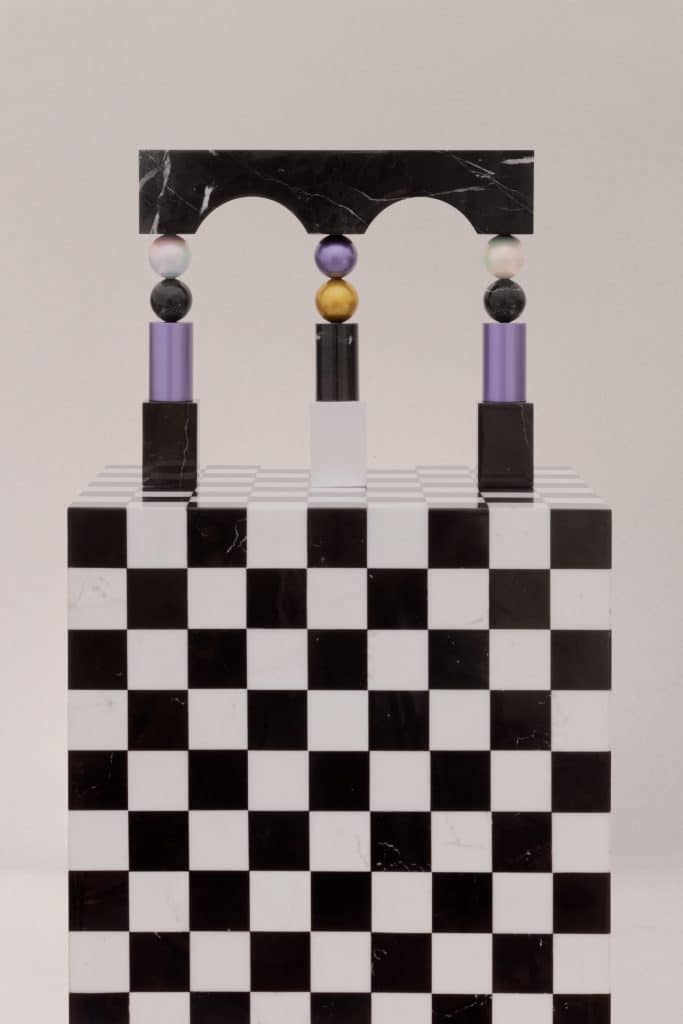 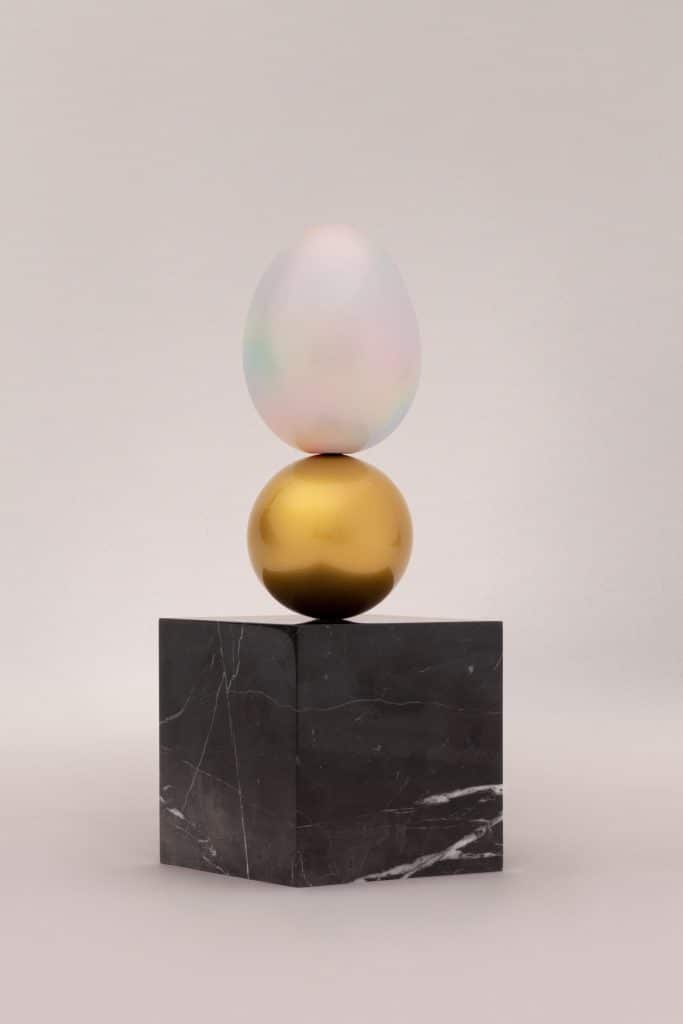 The exhibition includes a new series of dazzling egg sculptures with equally vibrant plinths that act as counterpoints to the NFT works both displayed on the gallery walls and existing in the digital realm. The egg, a perfect microcosm, the spark of creation and a universal token of rebirth and the mystery of life, has been an inexhaustible source of inspiration for artists throughout the ages: Hieronymus Bosch, Surrealist painters Salvador Dalí and Sofia Bassi, Romanian sculptor Constantin Brancusi or more recently Brazilian conceptual artist Anna Maria Maiolino.

In her Space of Variations, Pilar Zeta reclaims the egg to present a sculptural set using the gestural potential of assemblage. In her choice of forms, the artist returns to the purity of geometric volumes, while attributing a strong symbolic charge to each of the materials employed. Marble, aluminum, mirror, she seems to constantly express herself in the intersection between opposing universes: the natural and the synthetic, the familiar and the strange, the sacred and the profane, the spiritual and the sensual.

One of the central elements for Zeta’s practice is the desire to awaken a reflection on what happens beyond a first glance. Thus, mirrors and other reflective surfaces are used as representations of a visible reality coexisting with a possible future where vision, dream and chance govern. 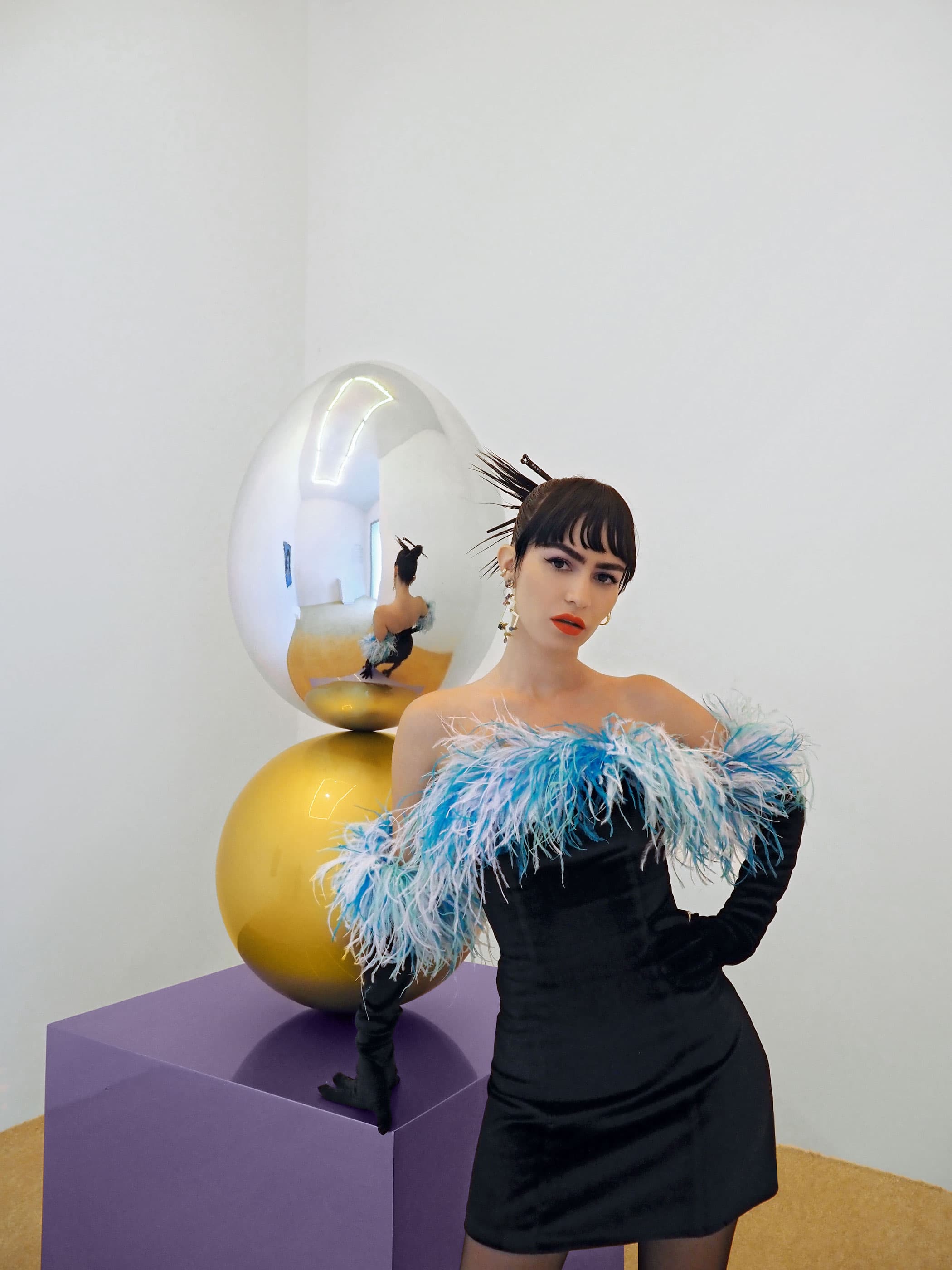 The egg reappears in Pilar Zeta’s kaleidoscopic digital world as a series of digitally animated works depicting various free-standing beings and their window views into the ocean. The color palette ranges from fiery oranges, creamy pale greens and purples, unknown to our “natural” skies. The intensity is modulated to emulate the transitions between night and day.

Zeta disrupts the established convention of the window being used solely to look out at something by emphasizing also the interior of the space and the existence of a dual reality. The eggs receive light from different angles, reflecting the objects’ volumes and textures. These works double as meditations, building upon Zeta’s skill in isolating an object to reveal something about its state of being. In this case, the existence of the egg as a symbol across time resonates most strongly. 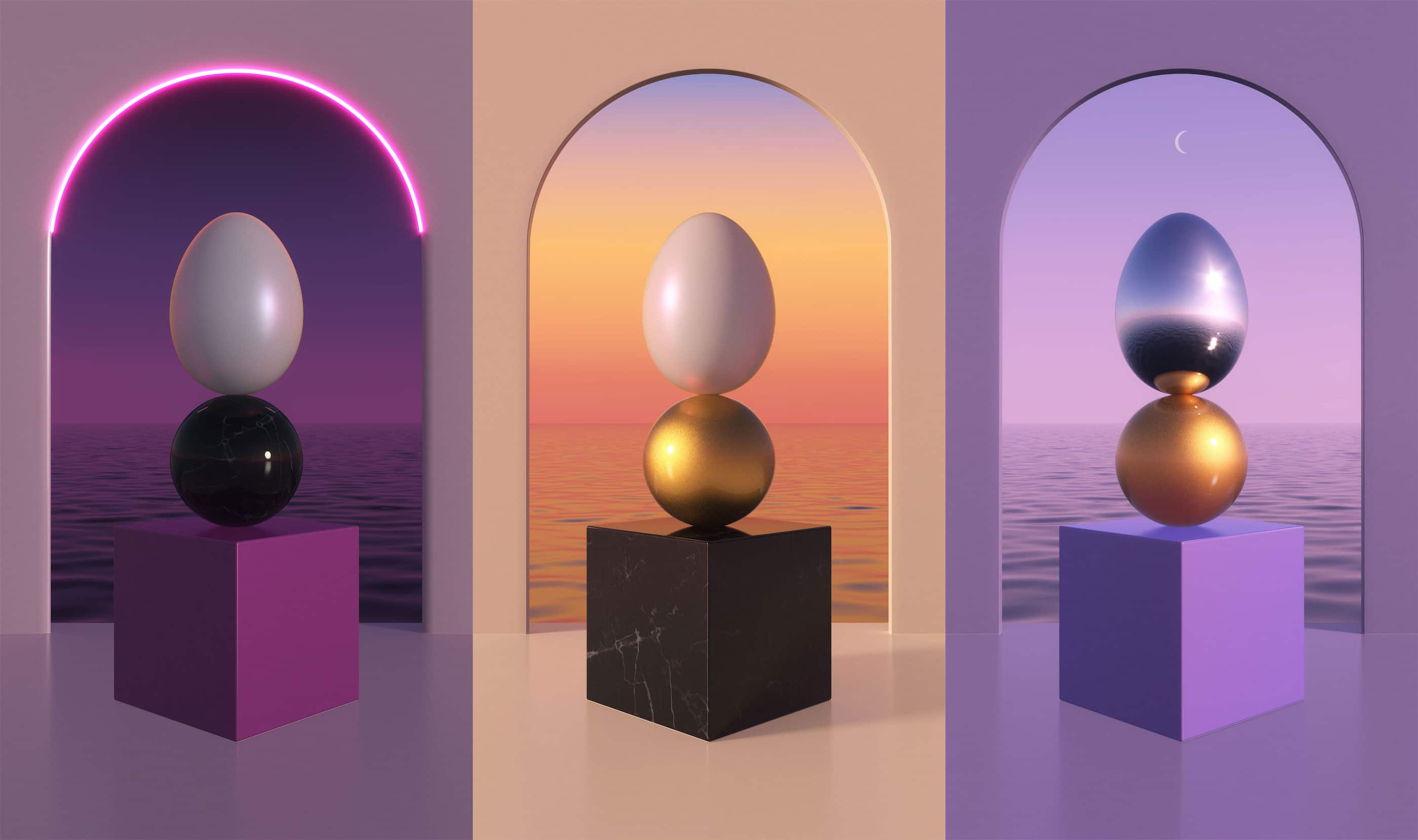