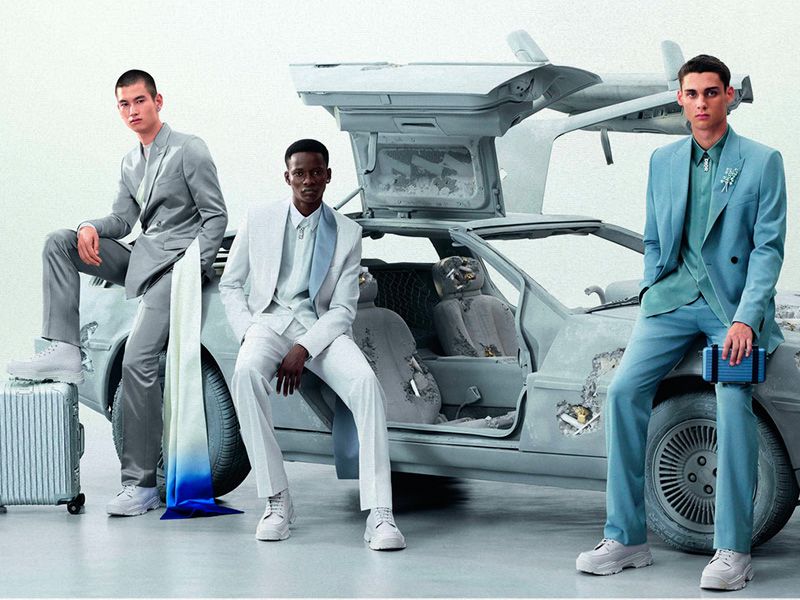 Dior launches into the future with the DeLorean DMC-12

Kim Jones and Daniel Arsham, the stars of Dior’s campaign for the SS20 season. Since the English designer took over the reins of the men’s line in March 2018, the French company has become a benchmark in men’s clothing. Everyone wants to be part of the new universe that Jones has created.

Once again, we want to immerse ourselves in this sophisticated, elegant imagery thanks to the brand’s new campaign. Kim Jones (@mrkimjones) and American artist Daniel Arsham (@danielarsham) chose the DeLorean DMC-12 – Back to the Future, 1985 – for the SS20 proposal, using one of the most widely used concepts in advertising, to travel to the future through a classic element. A subliminal message of Jones’ vision at Dior; to create through French heritage and masterful craftsmanship.

A very clean and simple proposal, in a variation of whites and greys that includes the famous Dior Oblique Canvas. Dior‘s corporate colour returns to be the protagonist thanks to the designer who has given it a new shine. The collection presents as a central point a series of custom-made suits made of light and soft fabrics, as well as shirts, polo coats and sweaters. Of course, the show includes a range of accessories, jewellery and footwear.

Photographer Steve Meisel (@stevemeisel_) compiles the new Dior codes with his camera. The campaign uses the tunnel as a journey, exploring new codes in the fashion house and Jones’ desire to create with the reference of history.

And 2021 arrived with “Eat you whole” by C. Tangana
Has the fashion industry appropriated the skate culture?
Shawn Stüssy and Dior: an ode to the Chinese New Year
Skepta and Nike’s brand new fifth air max unveiled
Welcome to 5K technology
Dior Makeup presents its spring collection
Shawn Stussy reinterprets Dior’s B27
Five surprising fashion moments that sum up 2020
Daniel Arsham drives his Air Dior into the future
DIOR launches the ultimate balm to moisturize your lips
The 5 most iconic fonts in the fashion world
Louis Vuitton presents its 2021 Pre-Fall Men’s Collection