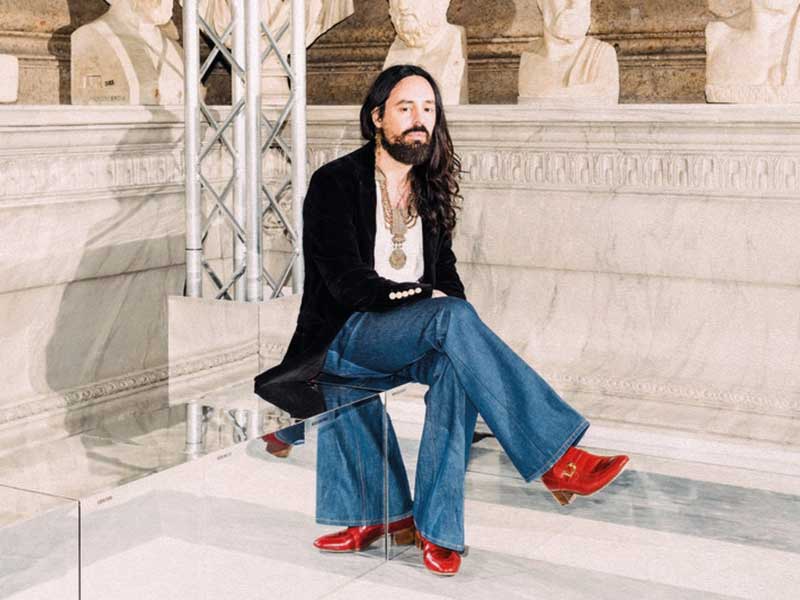 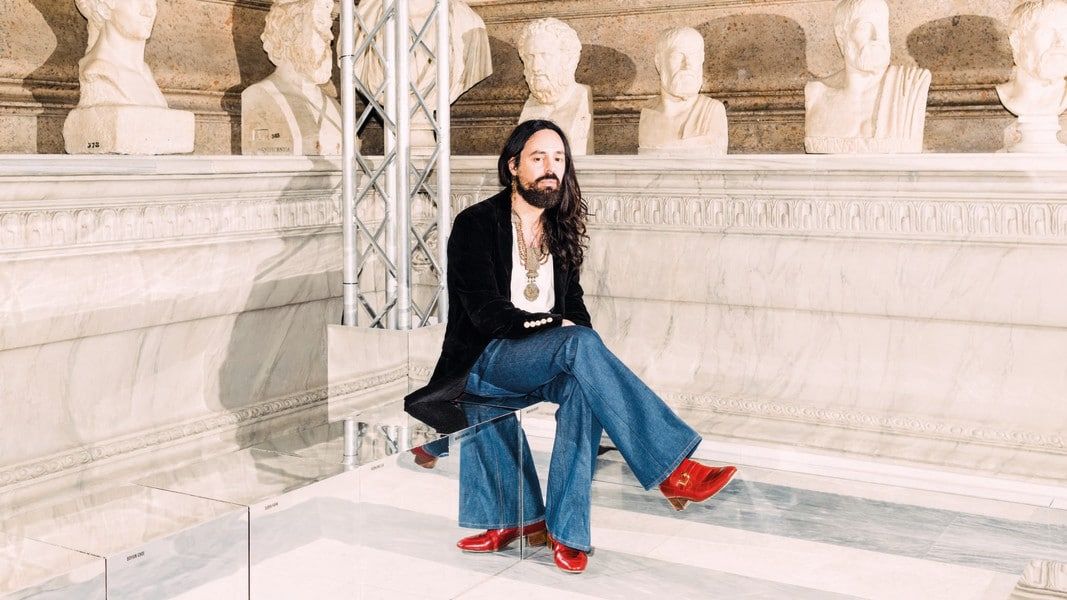 Alessandro Michele joined Gucci in 2002 as an accessory designer, by then under the creative direction of Tom Ford. It was not until 2016 that he took the reins of the Firm, taking a radical turn in the direction of the brand turning the minimalism and glamour of its predecessor into eccentricity. In a few years, he has revolutionized the world of fashion, being today one of the most relevant designers, if not the most, with Virgil Abloh’s permission. 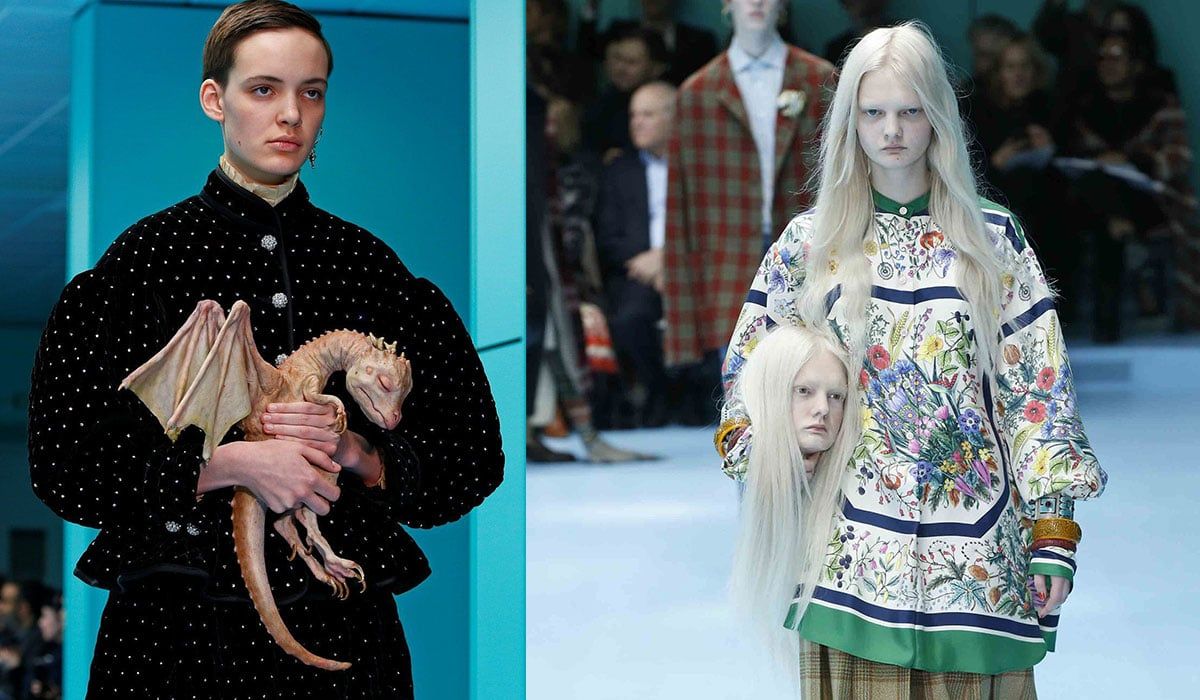 The replicas of their own heads and of baby dragons that some models held in their hands as they walked down the catwalk turnedinto an operating room forthe FW18 collection, were as fascinating as they were puzzling. Michele explained that these post-humans were the metaphor for how we construct our identities today, and how we can expose, hide or transform ourselves through technology, Instagram, fashion or cosmetic surgery. 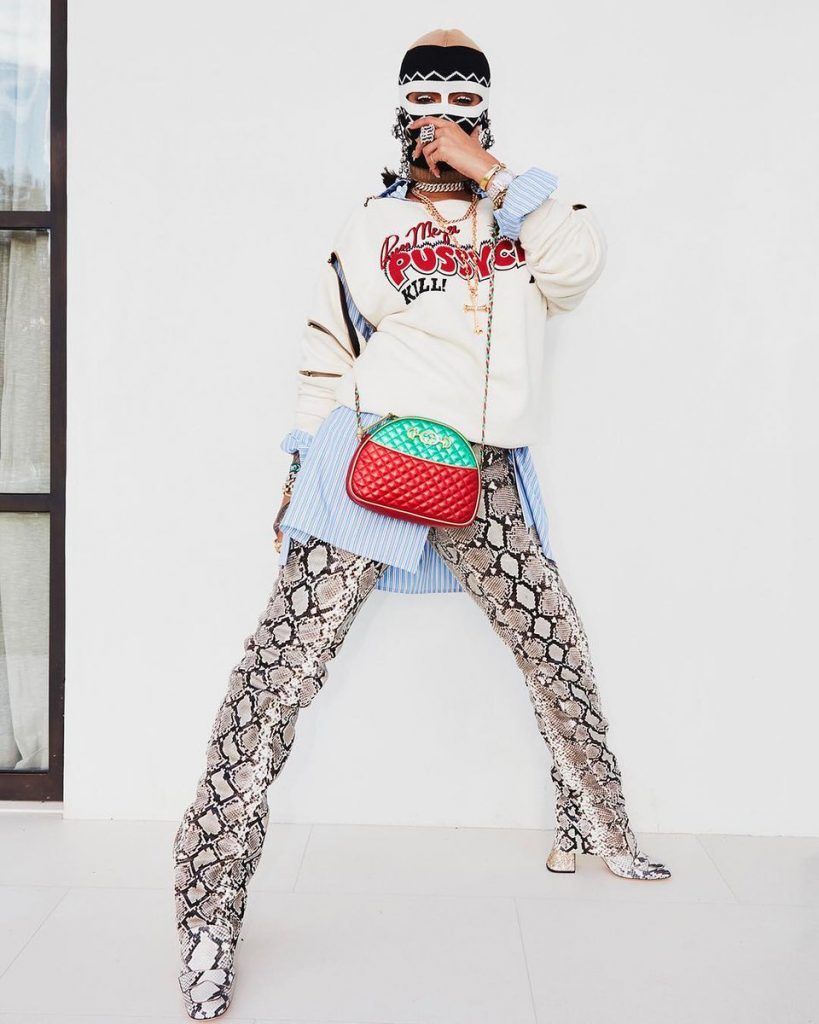 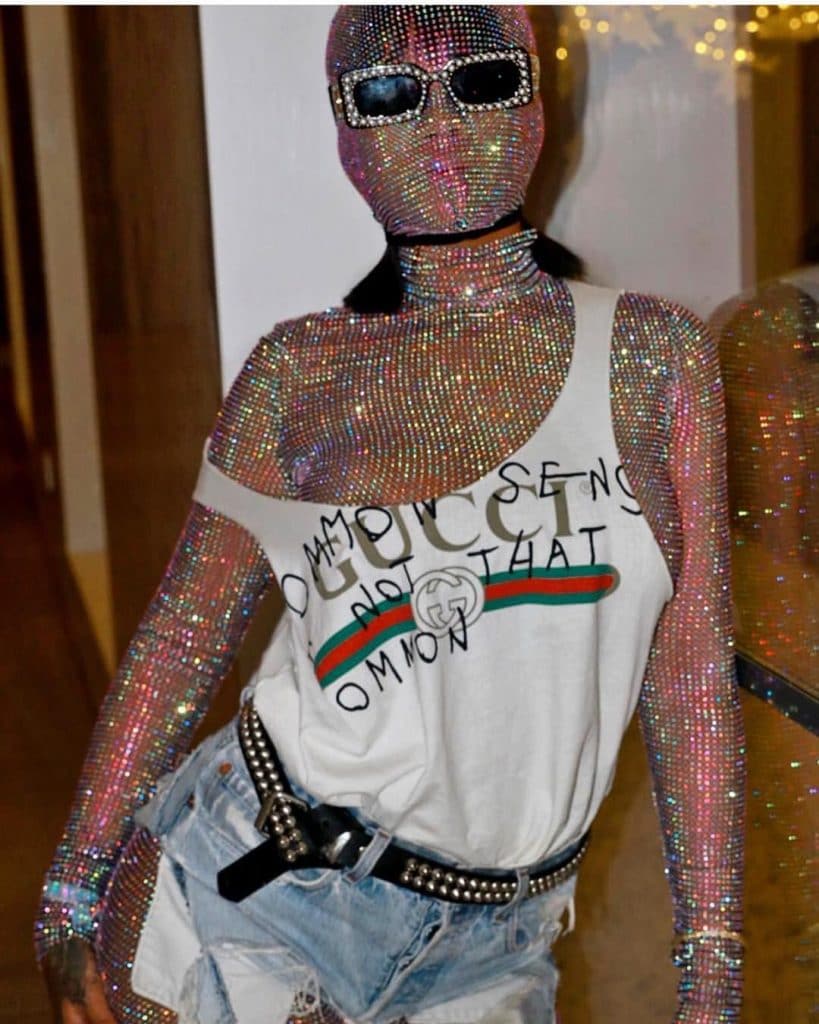 When fashion dictates that Coachella meansboho, shorts, glitter and temporary tattoos, Rihanna sported a look straight out of the Gucci FW18 runway show consisting of ashirt, sweatshirt, thigh-high boots and balaclava. It was not the firsttime that the singer was seen in that guise: the previous year she chose another balaclava Gucci outfit for the same festival. It was difficult for this fashion to succeed, but it did went viral.

RECOVER THE VINTAGE OF ALL DECADES 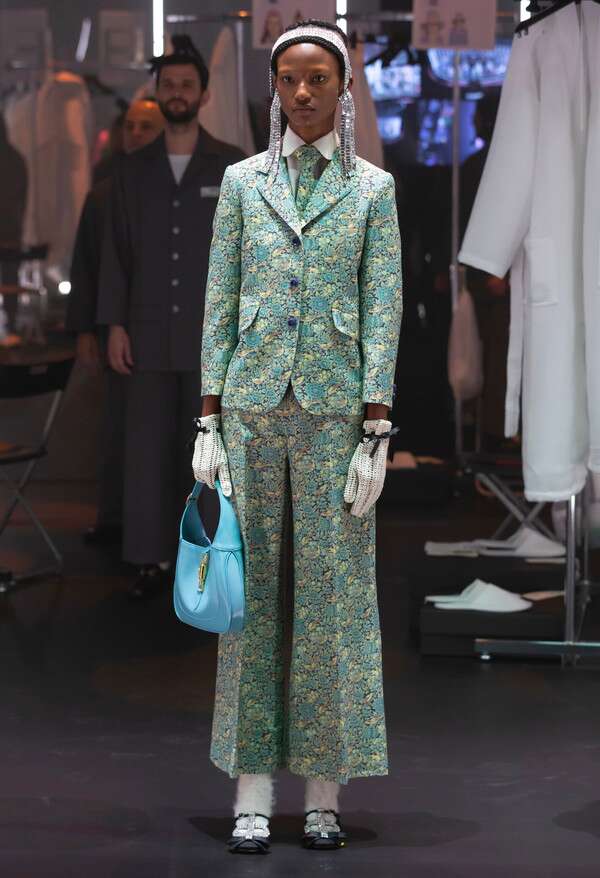 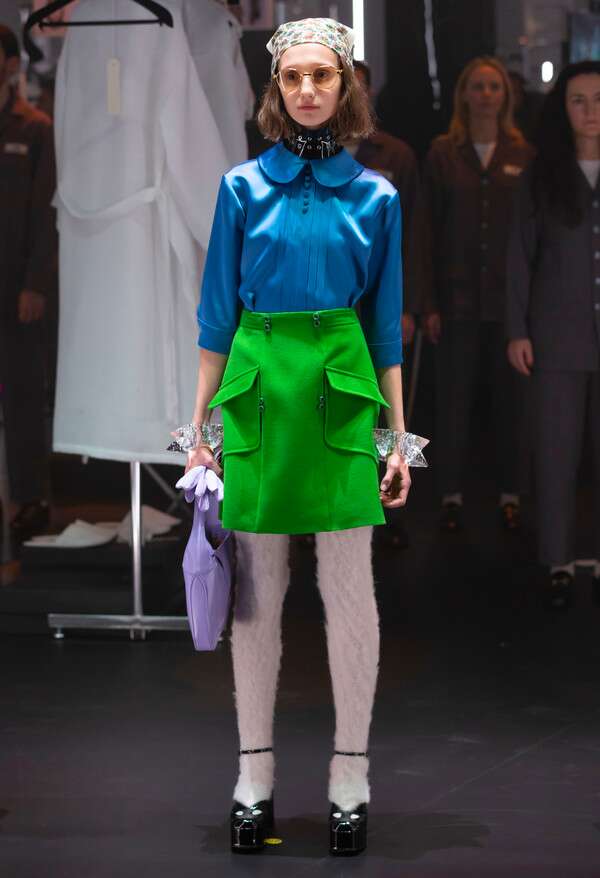 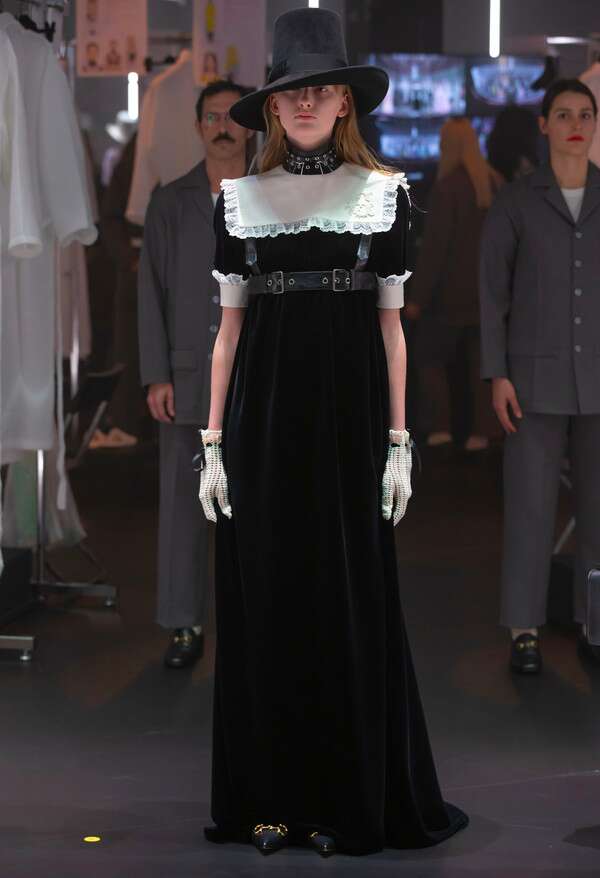 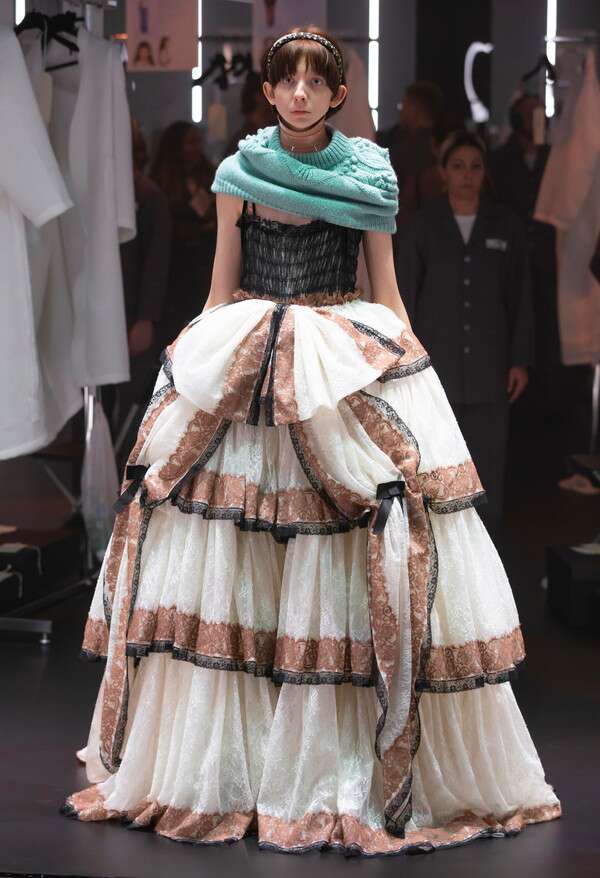 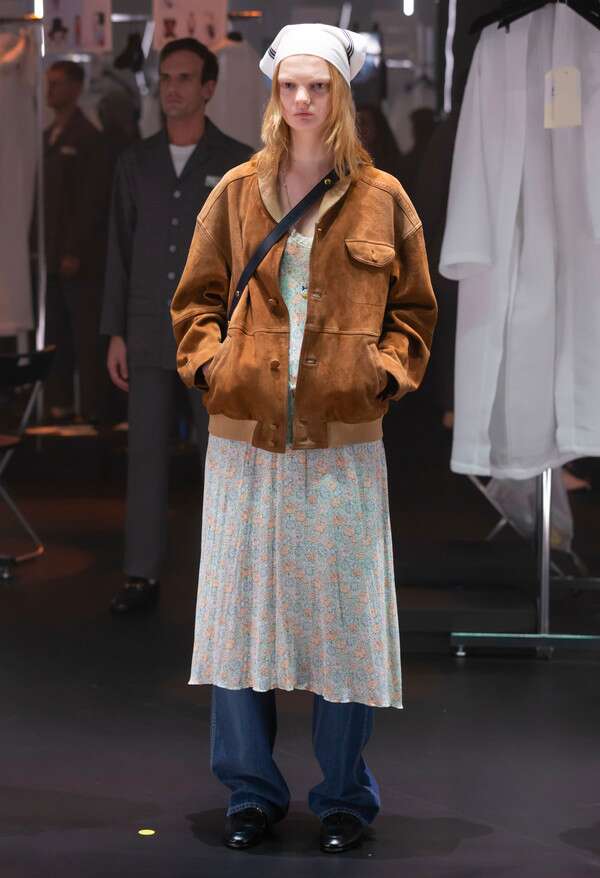 If there is someone who has turned vintage into a trend and elevated it to a new kind of retro elegance and glamour without being outdated, that has been Alessandro Michele. In other words, that all the decades and styles are in fashion at the same time, from the Victorian, the flappers, the 40s, 60s, 70s, 90s … we owe it,in large part,to him. 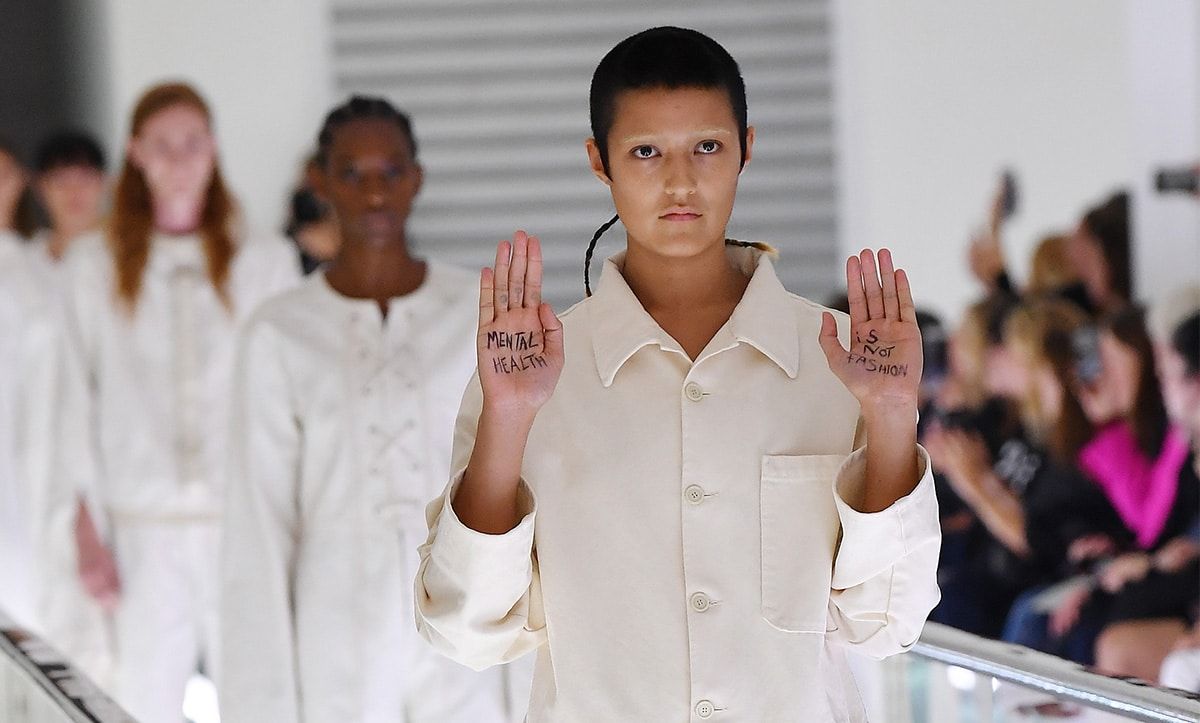 The SS20 show was opened by a series of outfitsthat reflected and reformulated straight jackets. Finding offensive and insensitive to glamourize this delicate issue, English model Hari Nef made her personal protest by writing in the palm of her hands “Mental health is not fashion”. Alessandro Michele later explained that uniforms block and restrict, make the individual anonymous. Hiscollections exude freedom and individual expression, and these jackets (which had been created for the fashion show onlyand would not be for sale) were intended to invite reflection on uniformity, without the slightest intention of banalizingmental illness. The controversy wasserved. 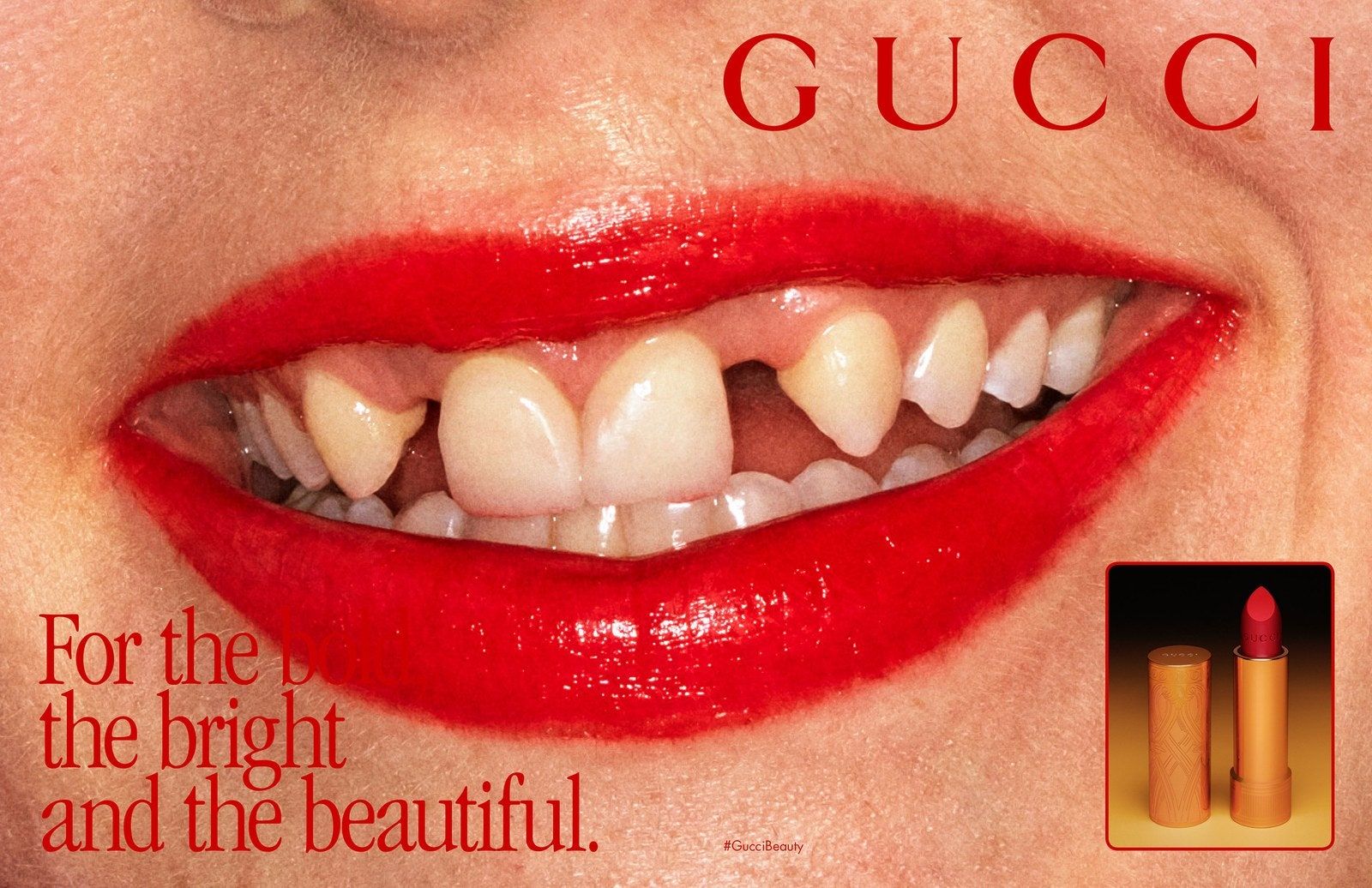 In Alessandro Michele’s Gucci, atypical beauty is the protagonist. There is nothing surprising about a lipstick line per se, but the presentation of the Gucci Beauty campaign in May 2019 was. The Firm took inclusivity and breaking stereotypes a step further by showing the lipsticks on all kinds of dentures, being the most iconic that of the punk group singer The Real Surfbort, Dani Miller – @alienzarereal.

IGGY POP IN A LIMO 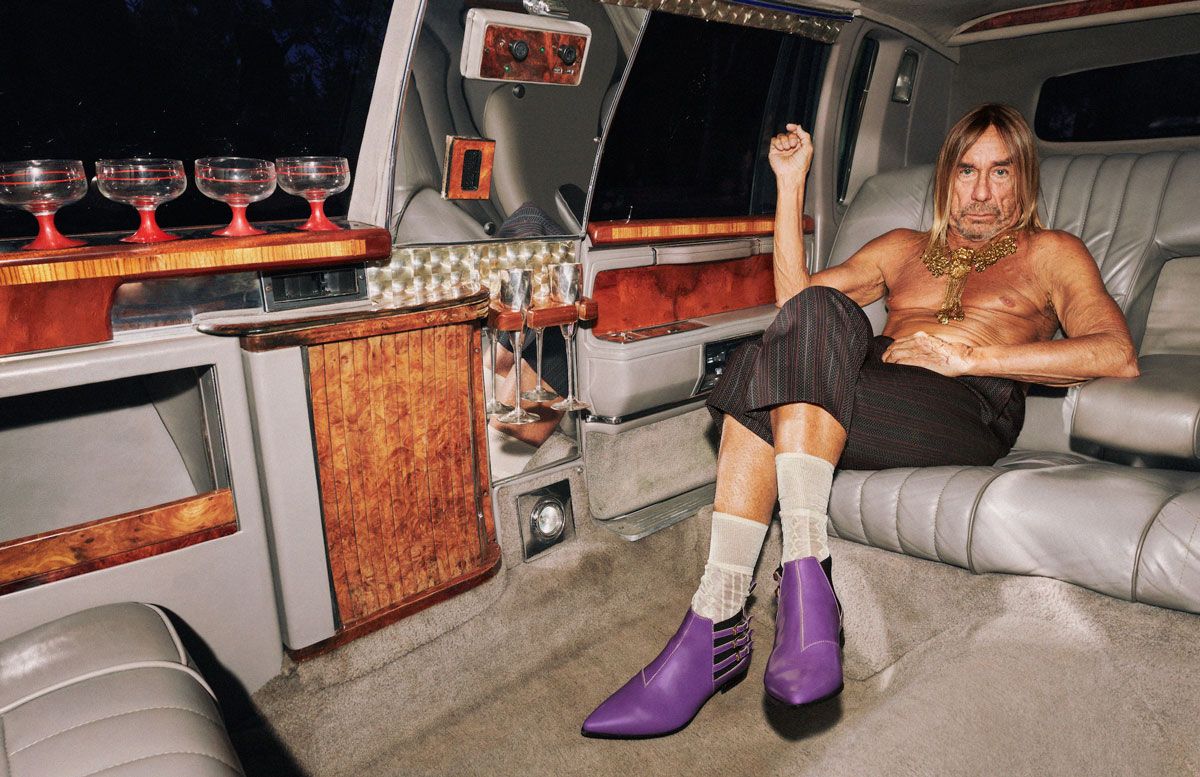 The eternal rock star joined rapper Gucci Mane, actress and socialite Sienna Miller, and a whole motley characters in a villa to celebrate the most VIP party in the ComeAsYouAre_RSVP campaign. Photographed by Harmony Korine (Spring Breakers director and Kids screenwriter), Gucci presented the 2020Cruise collection in the most surprising and irreverent way. 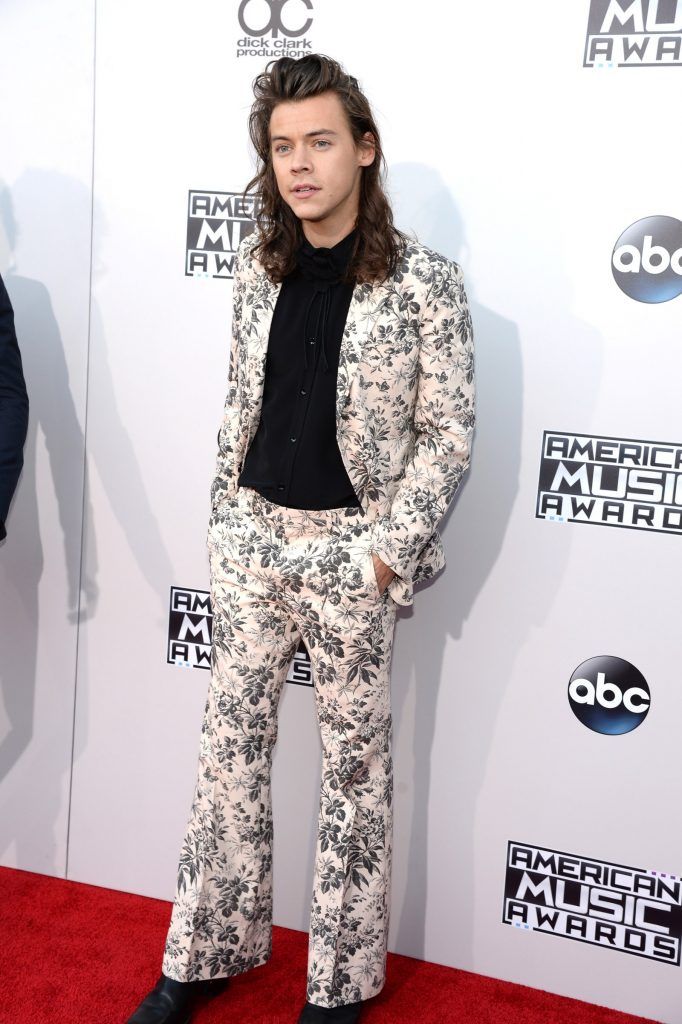 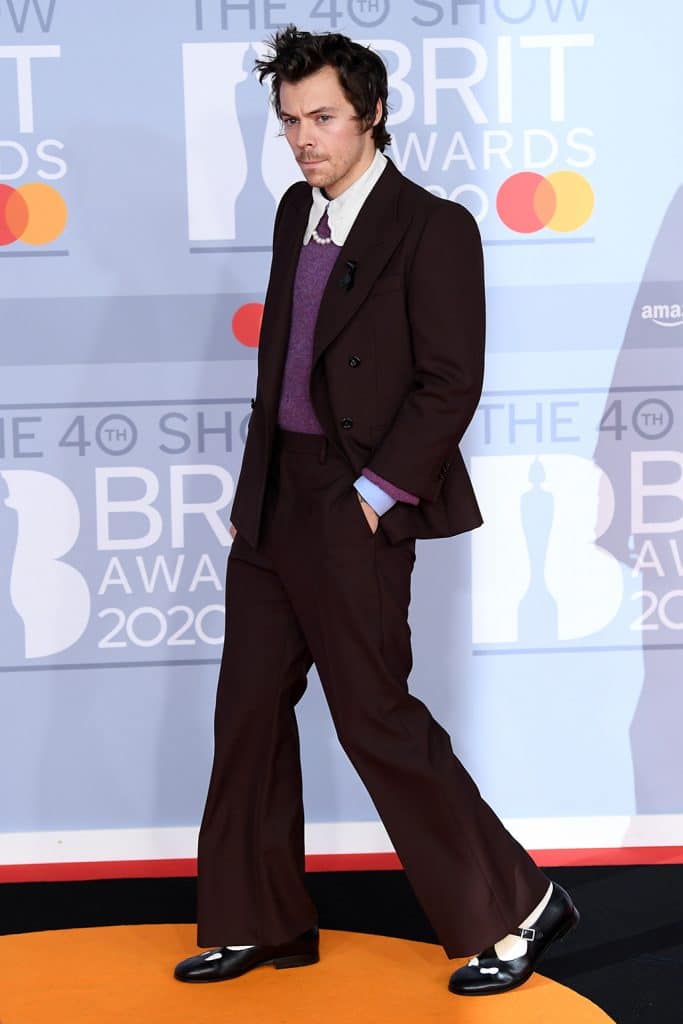 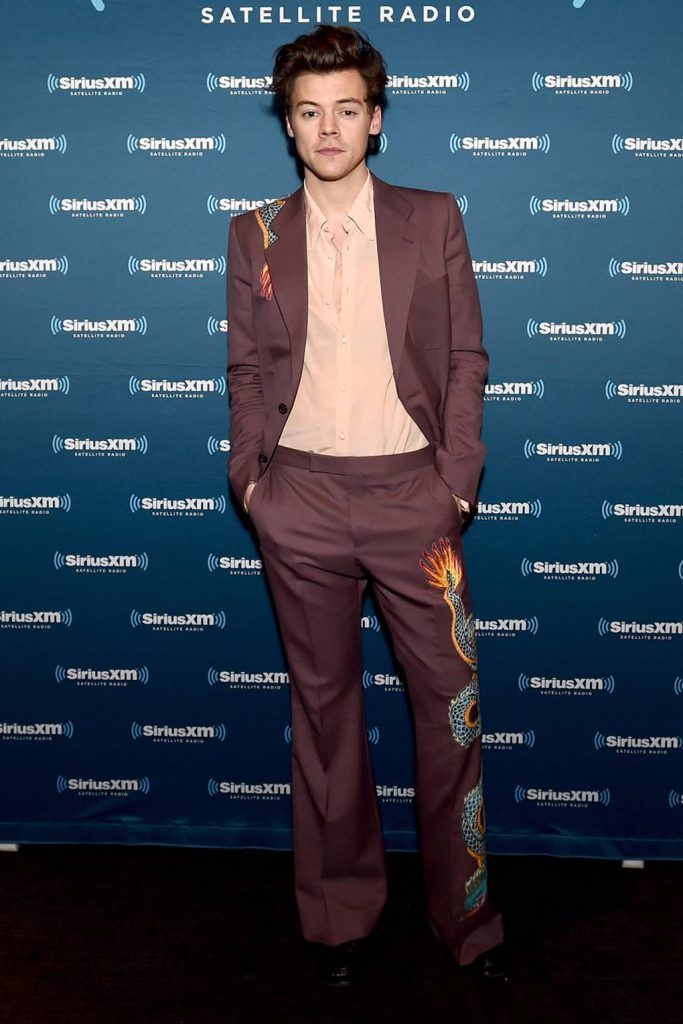 With baby animals, such as baby pigs or baby goats, forthe 2019 Cruise collection campaign; the seventies suits with which he struts down the red carpets; his 2019 MET Gala look with the Camp theme. The idyll between Gucci and the singer and opponentof fashion icon Harry Styles is also one of the most applauded and celebrated things of the Alessandro Michele era.

MAKE STYLINGS, AND NOT GARMENTS, THE PROTAGONISTS OF THE FASHION SHOWS 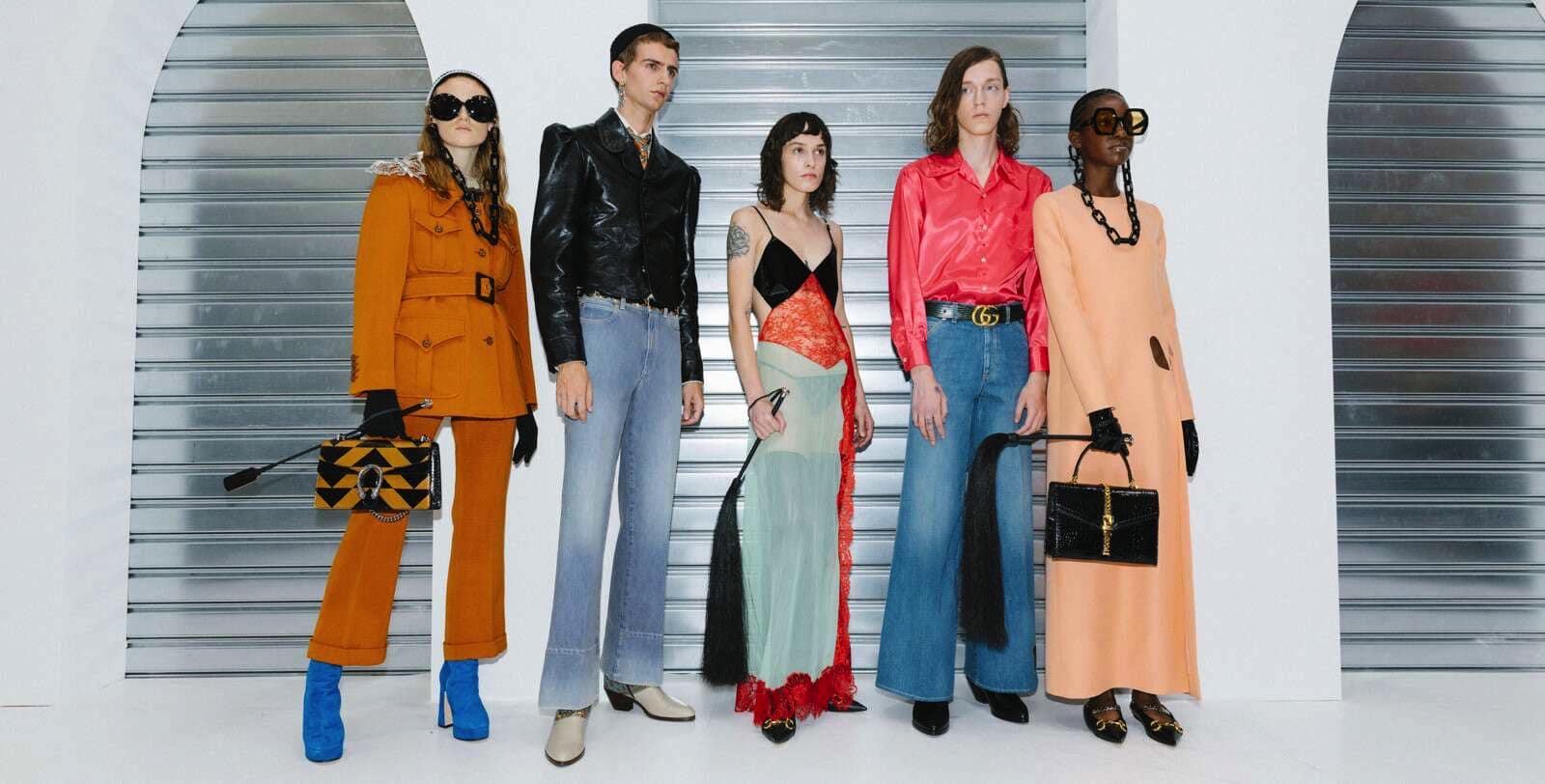 The aim of the stylingSand beauty of fashion shows isto unify the garments to help convey the theme of the collection. Alessandro Michele has destroyed this idea and each of his outfitsenjoys of independent hair, makeup, accessories and styling. Each outfit is ensembledindividually, creating a greater variety and contrast between them. What unifies the Gucci shows is,precisely,its lack of unity.

THE NON-BINARY AND OTHER SOCIAL CONSTRUCTS 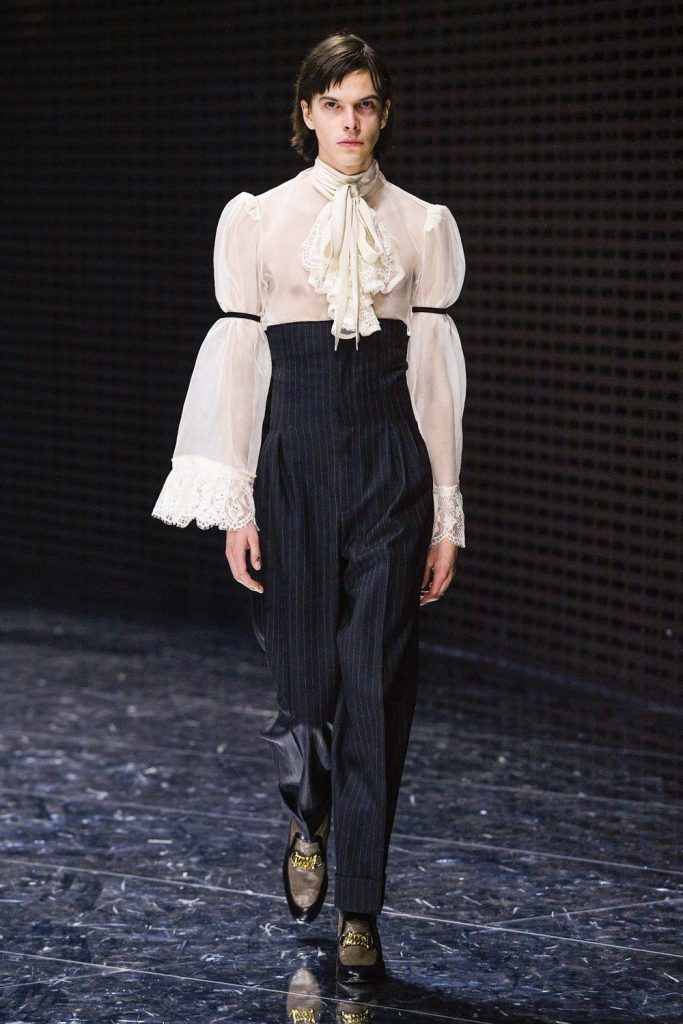 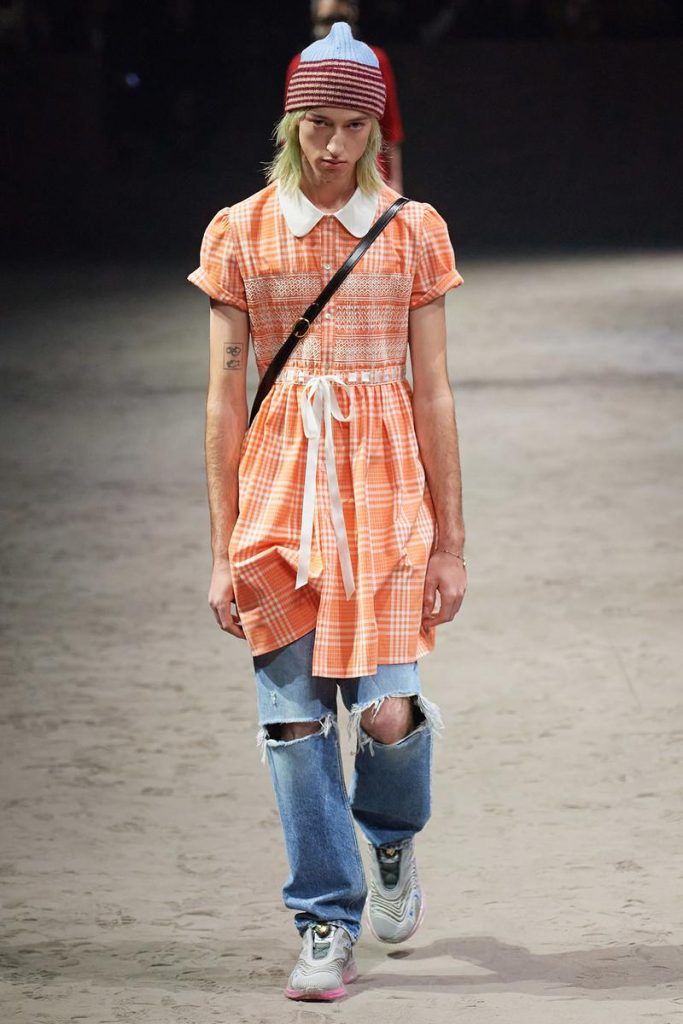 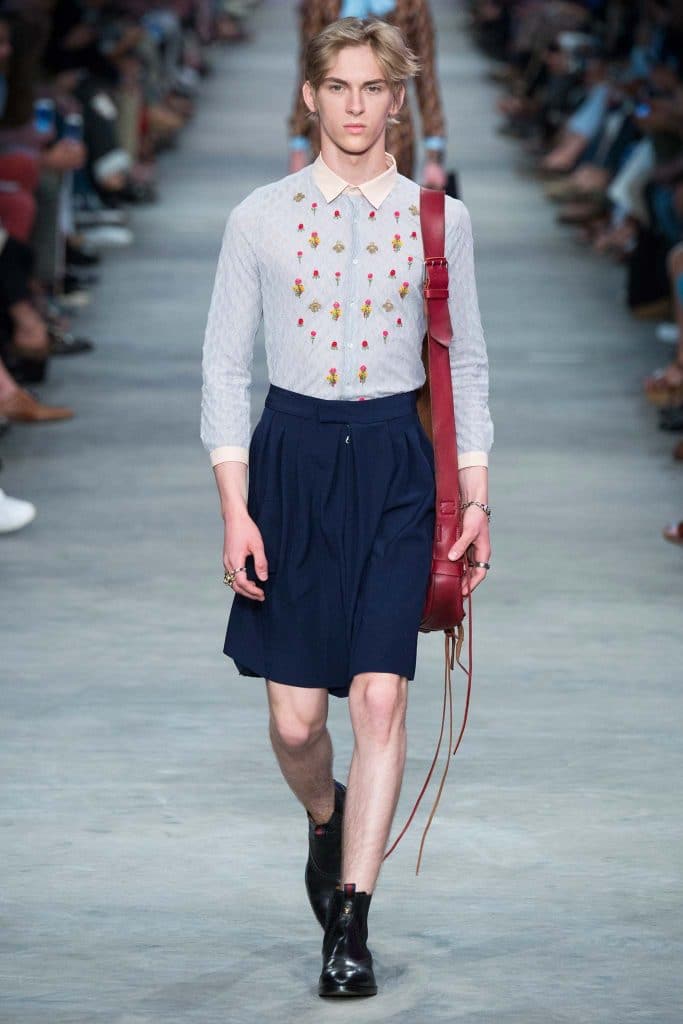 Through his campaigns and stylings, the creative director fightsto change the way we understand gender identities. Alessandro Michele’s androgynous models and outfitsare characteristicof the Firm nowadays, as well as the freedom of silhouettes, garments and materials that he uses for his Menswear and Tailoring collections, of a delicacy and colour palette unusual in menswear. Very vivid colors, prints of all kinds, satins, silks, platforms, skinny fits, very short shorts, skirts, dresses. He is not the first designer on the face of the earth to do this, but every stone makes a wall – and the stones that Gucci lays, due to itsexposure and weight in the industry, count for multiplied. The definitive step will be reached when they stop distinguishing between men’s and women’s collections, not so far-fetched, actually,seeing their trajectory.

BEYONCÉ AND THE MONOGRAM PRINT 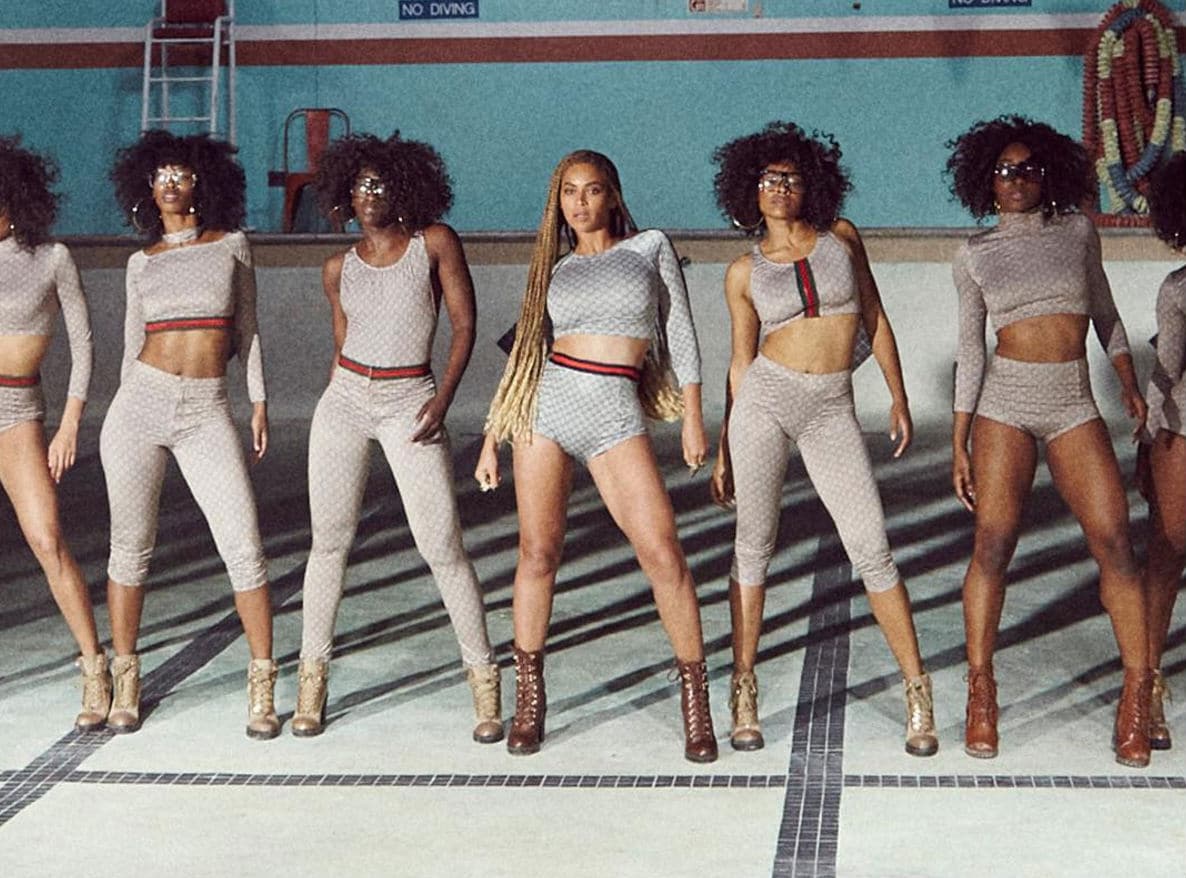 Following the current Gucci narrative, Alessandro Michele makes the old new by celebrating past and present. This is how the Firmrecoveredthe monogram print, the tricolor stripe, the loafers or several handbags and leather goods. Needless to say, all of them are objects of desire and flood instagramaccounts, editorials and videoclipsthese days. Very memorable was Beyoncé‘s Formation Army stylingfor the 2018 Formation videoclip. Consisting of a collection of tops, leggings and shorts with the monogram and tricolor stripe, the iconic image contributed to elevate them tomust haveeven more, if possible.