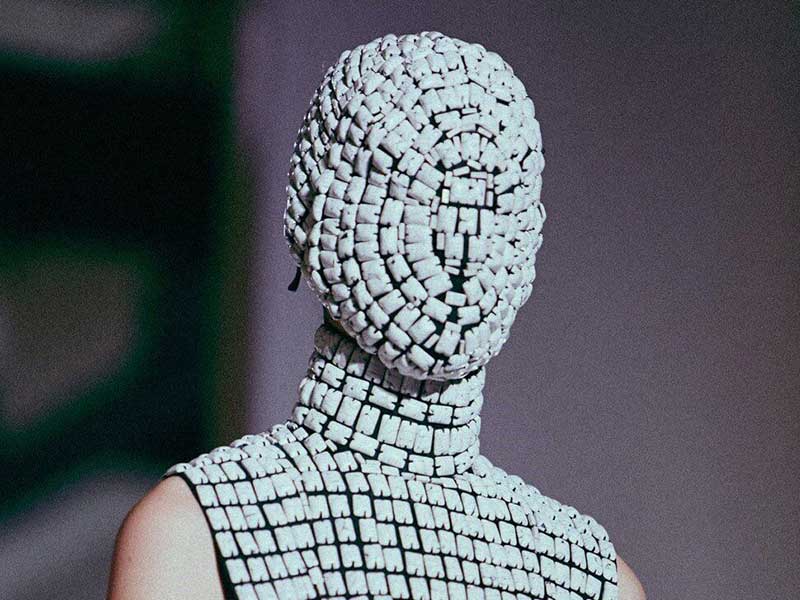 Why masks and Tabi Boots have defined Maison Margiela’s heritage

As well as The Antwerp Six or Rei Kawakubo, Martin Margiela takes part of that bubble that has flown through time with impulses that transgress all parameters in fashion history. His work in the field of deconstruction, the reuse of fabrics and his leading role in anti-fashion opposed mass culture and the mass marketing of the main haute-couture houses until he became a global icon.

In 1988 the creative work of the belgian designer and his team of workers with labcoats began the construction of a new paradise called Maison Margiela, the one that in 2014 John Galliano replaced keeping his codes and the strong aesthetic impact that surrounds the upside-down universe of the french brand. We review the imaginary of the fashion legend and the iconic archive of the Maison in which to get lost among wigs, strident makeup, experimental fabrics and so on. We focus on their anonymity and the story behind the hype, on how the masks and Tabi Boots have become an obsession, on the pieces of the universal high-end showcase.

THE VISION THROUGH HIS MASKS

Part of Maison Margiela‘s story can be seen through the masks that marked a hallmark in the fashion industry since her debut at the SS89 show. Those masks that already inspired artists like Picasso or Matisse got on the catwalk stage to stay forever. The aesthetic of the past that surrounds the house, of looking back, feeds all the roots of the brand, as does anonymity: Martin Margiela‘s maxim that fixes the protagonism in the creative team in its totality and not only in a visible face. That’s precisely why all the brand’s workers wear white coats, so that the hierarchy doesn’t exist.

The idea of anonymity is transferred to the universe of Margiela’s masks, in that of focusing the vanishing point on the clothes and not on the people who wear them. ‘Look at my clothes and only judge my clothes’. The models thus become faceless people, anonymous since the debut of the masks in 1989. Another surrealistic samples can be seen in the colorful 1995 proposal, in SS96 where other ways of hiding identity were presented, in FW2000 and its exaggerated fringes that covered the face, as well as in SS2008 where the models covered their eyes with ribbons. But SS2009, the anivesary collection, became the most iconic because it was a mix that merged all the highlights of the house: masks, wigs, reconstruction and eccentric makeups. 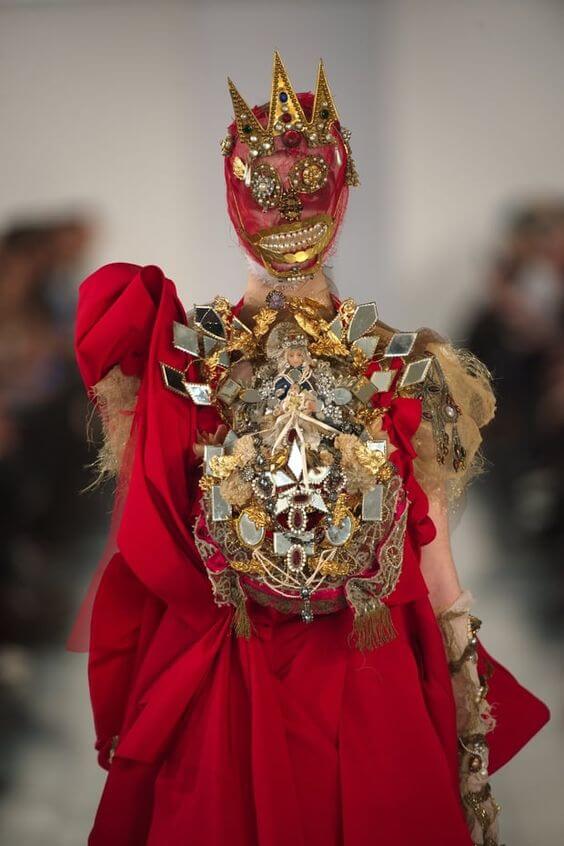 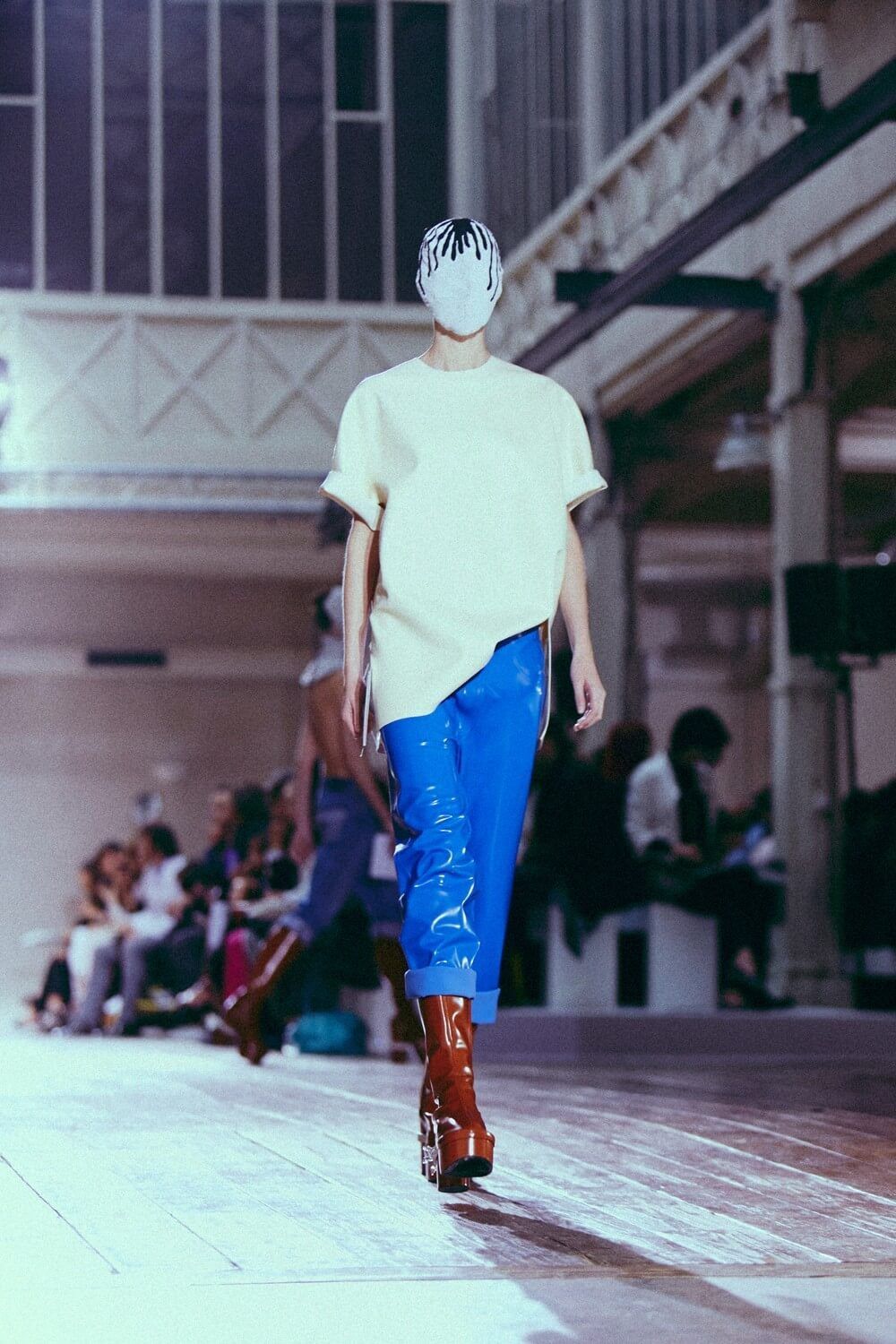 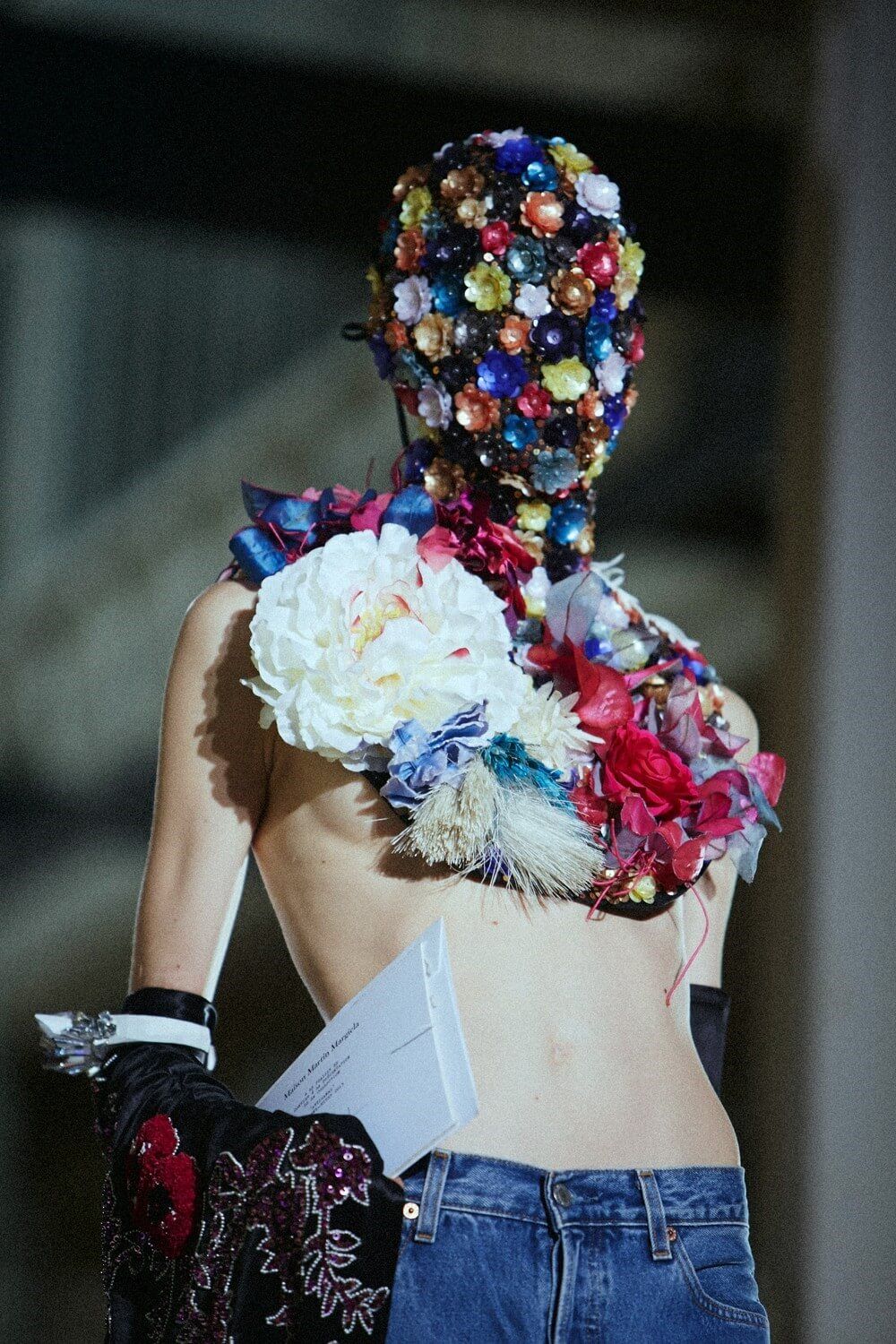 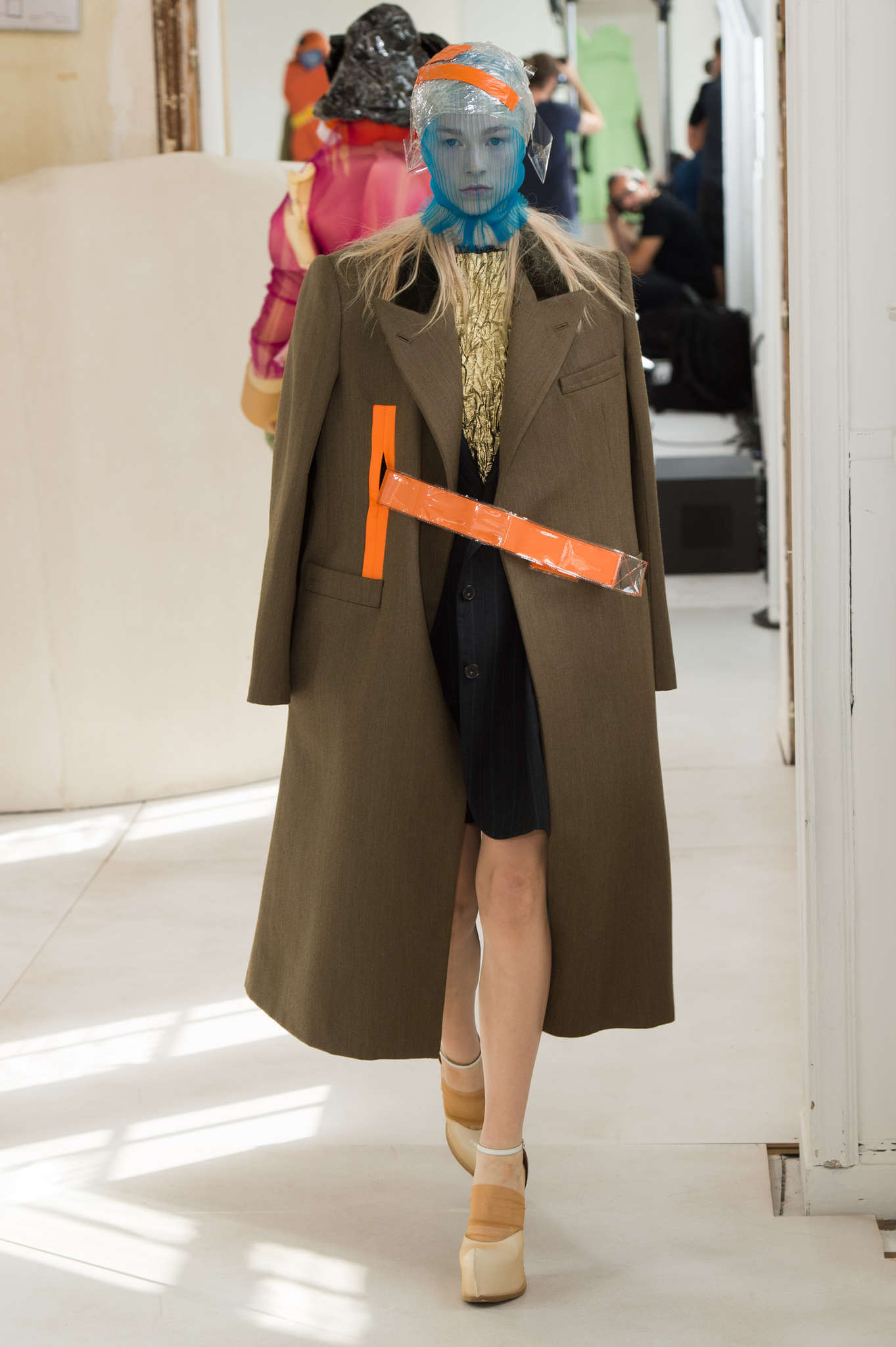 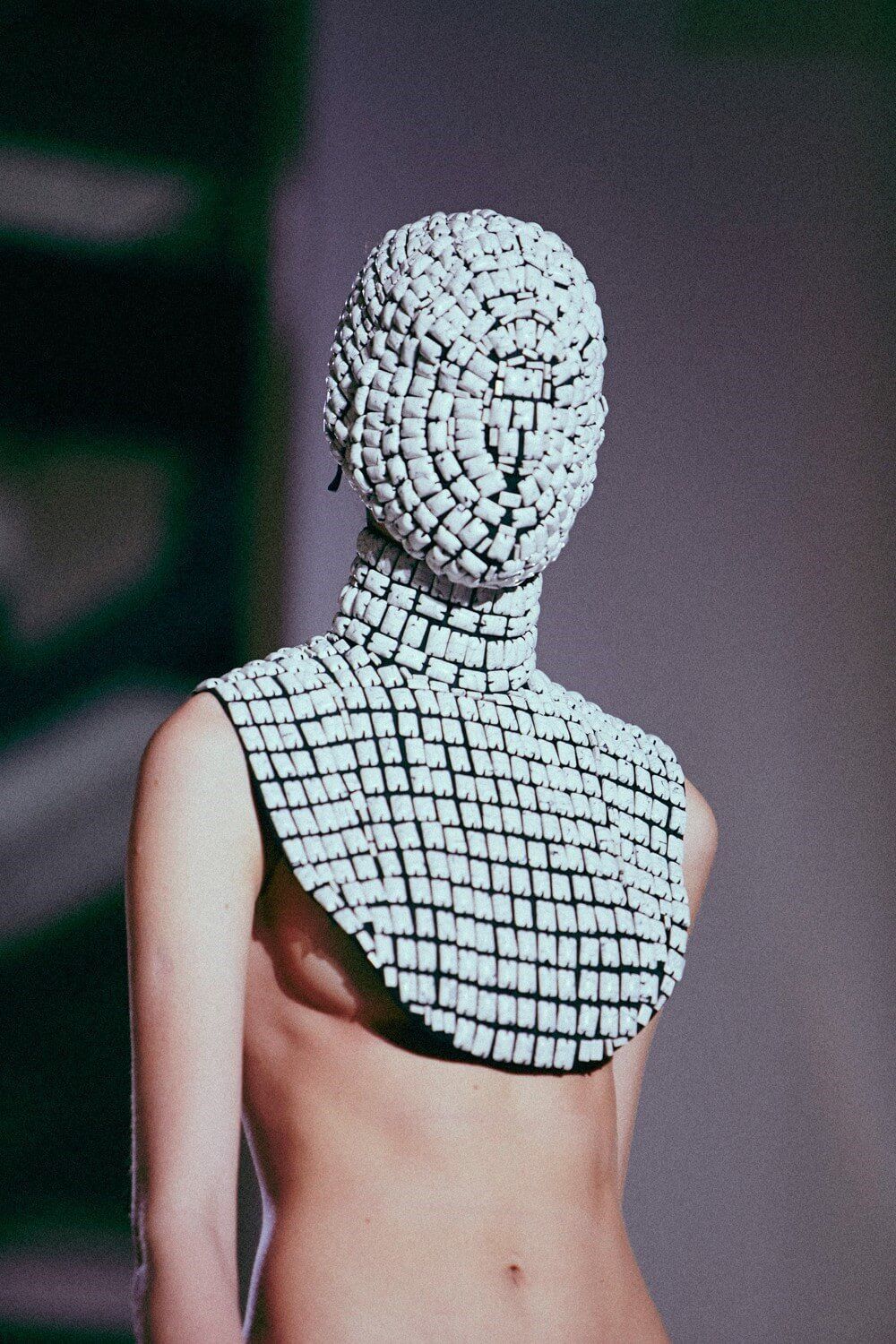 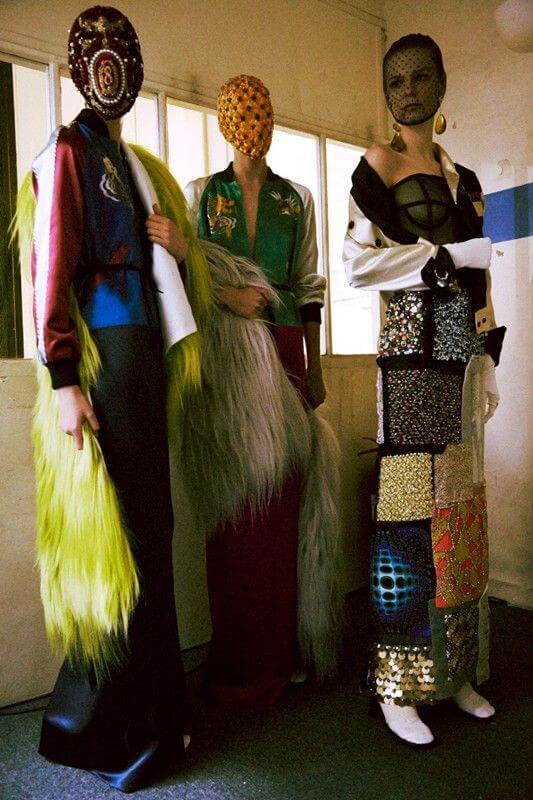 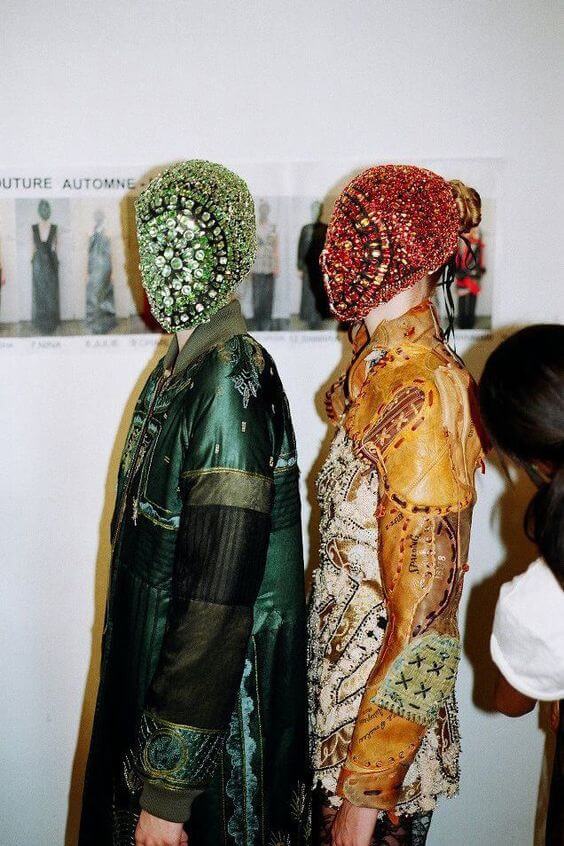 The enigmatic power of masks has been used as a creative resource by other designers such as Stefan Kartchev or Walter Van Beirendonck, following a process of research, design and experimentation. La Maison has come to create them in countless formats, with applications such as Swarovski, floral motifs, embellishments, dripping paintings or impregnate them with futurism, subversion or ethnicity inspired by artists like Basquiat. But what were the reasons why Margiela began to dress her models with masks? It all started for an economic reason, since the creative director’s budget did not allow him to pay important models as other firms like Dior did for their catwalks, beyond the idea of the public focusing on clothes and nothing else, on their techniques and fabrics. In addition, the haute-couture masks have remained in line with this anti-establishment idea that guides the heritage of the house. Go against what already exists.

Margiela’s obsession with Tabi or split-toe shoes began in 1988. The designer influenced by Japanese culture in the fifteenth century noticed those cotton socks imported from China that were beginning to be mass-produced at that time. Their original split-finger design was worn with traditional sandals that became a symbol of social status. 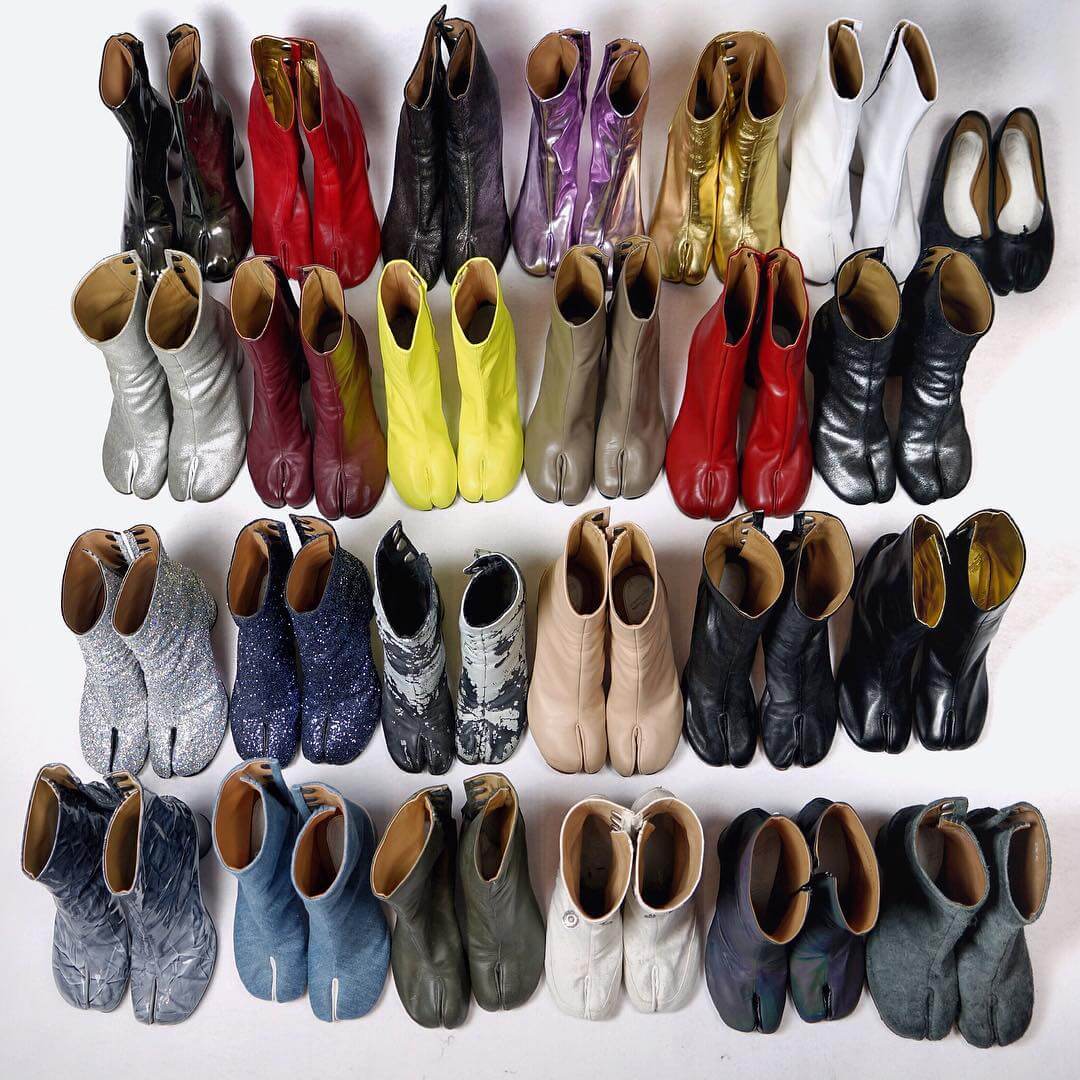 Thus, Martin ‘culturally appropriated’ that piece to give way to its iteration, deconstruct it and turn it into one of Margiela’s most characteristic elements that would leave its mark throughout history. The hoof -commonly known- was seen for the first time in the firm’s debut show in which the models wore laboratory coats stained with red paint, leaving traces of the Tabi prints on a white cloth. That print would be used to make way for his next collection.

From that moment, the boots have not stopped raising their position, being created in different colors, with different prints, materials, colors, graffiti and experimental interpretations ranging from clogs and sandals to the ‘Toppless tabi’, consisting of a sole and a heel attached to the feet of the models with rolls of Scottish adhesive tape. Brands such as Nike or Prada also made their own vision of the shoe a reality, as did Demna Gvsalia for Vetements AW18, even if it caused a digital revolution. 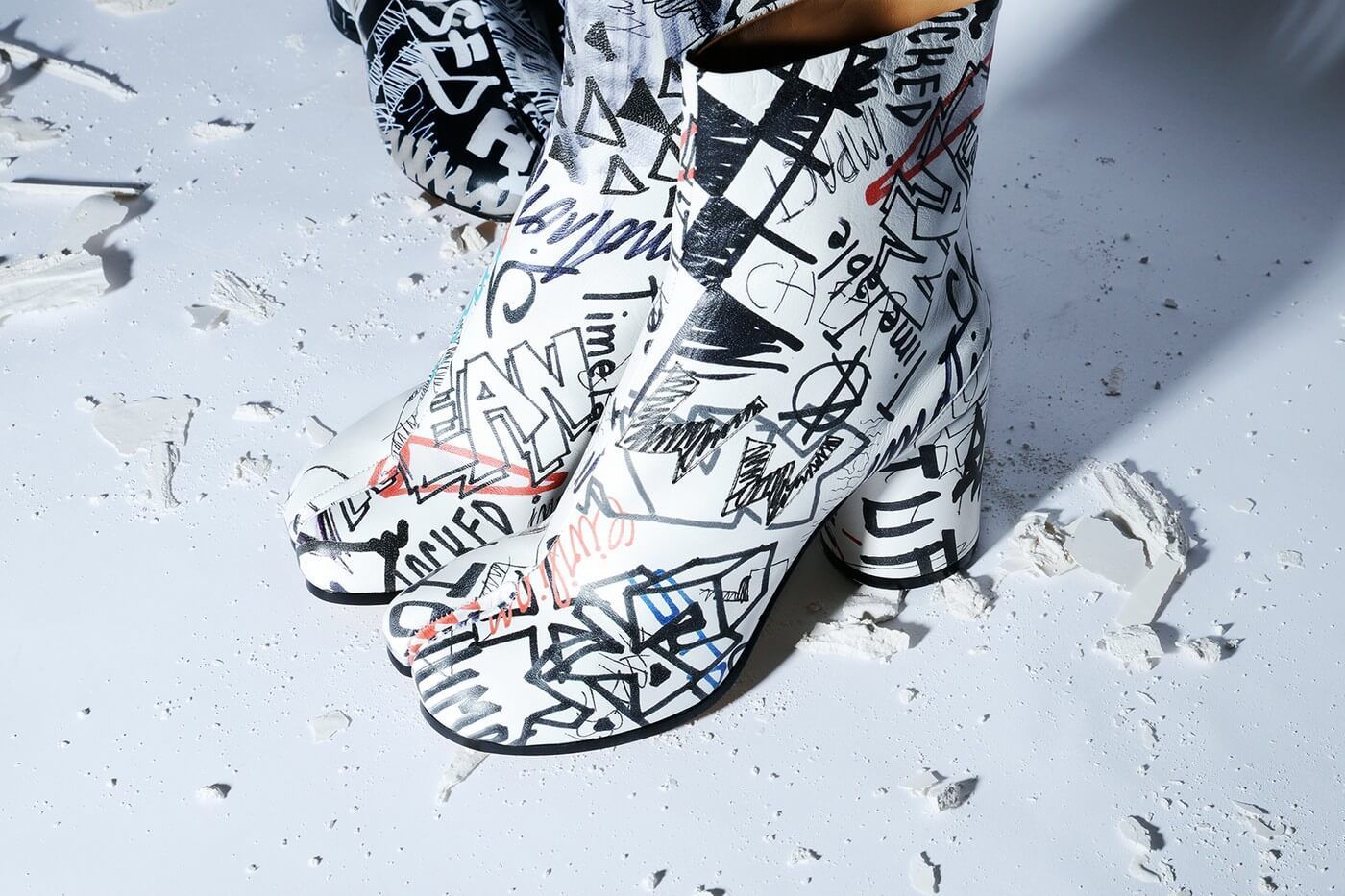 The Tabi are thus Margiela’s unstoppable hallmark that apart from causing controversy, advocates genderless fashion. The idea of this genderless piece, which was originally unisex, began to take shape when Margiela introduced her version of the boot Tabi for men last season, the one worn by Steve Lacy or A $AP Rocky, raising it as the great unstoppable trend with 30 years of trajectory. So much it is the hype of the boots that exist accounts of Instagram as @margielatab1 that files them all. The owner of the feed helps us to further strengthen our love for the Maison Margiela archive: an ode to experimentation, transgression and reflection in fashion.