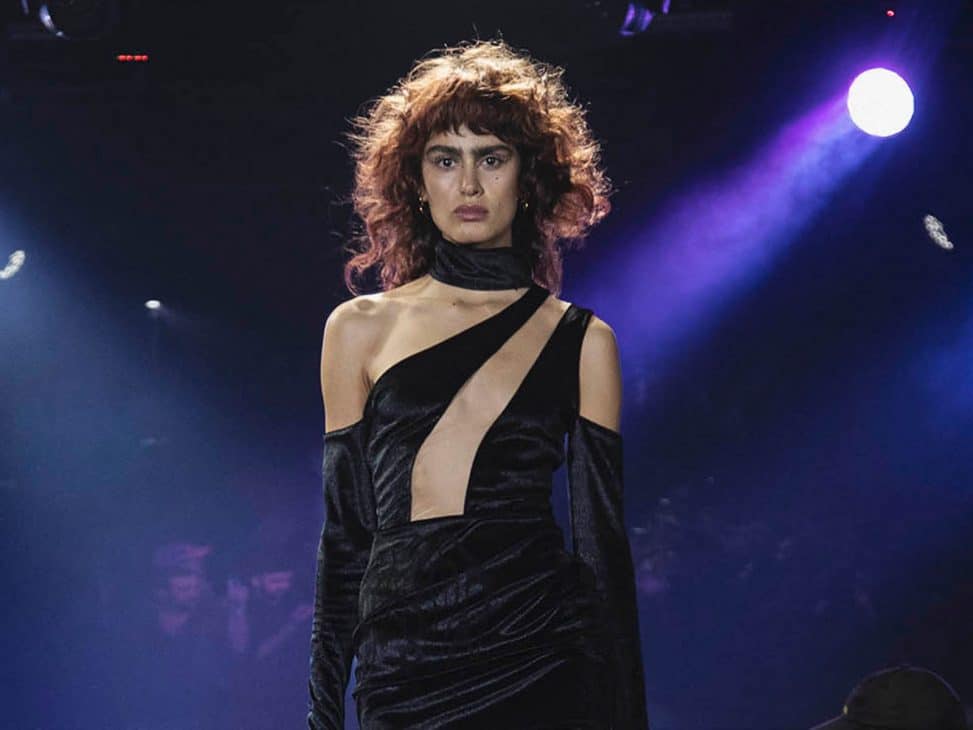 Cherry Massia elevates the figure of the heroine in Zenith

After having launched its last collection ‘Nadir’ a few weeks before the beginning of the pandemic, Cherry Massia presents ‘Zenith’. A new proposal that began at the start of the confinement. With this collection, the firm outlines another chapter in its work and in its reflection on the path of the hero (heroine in this case). A story that he began to spin with his first collection and that continues with this new proposal. 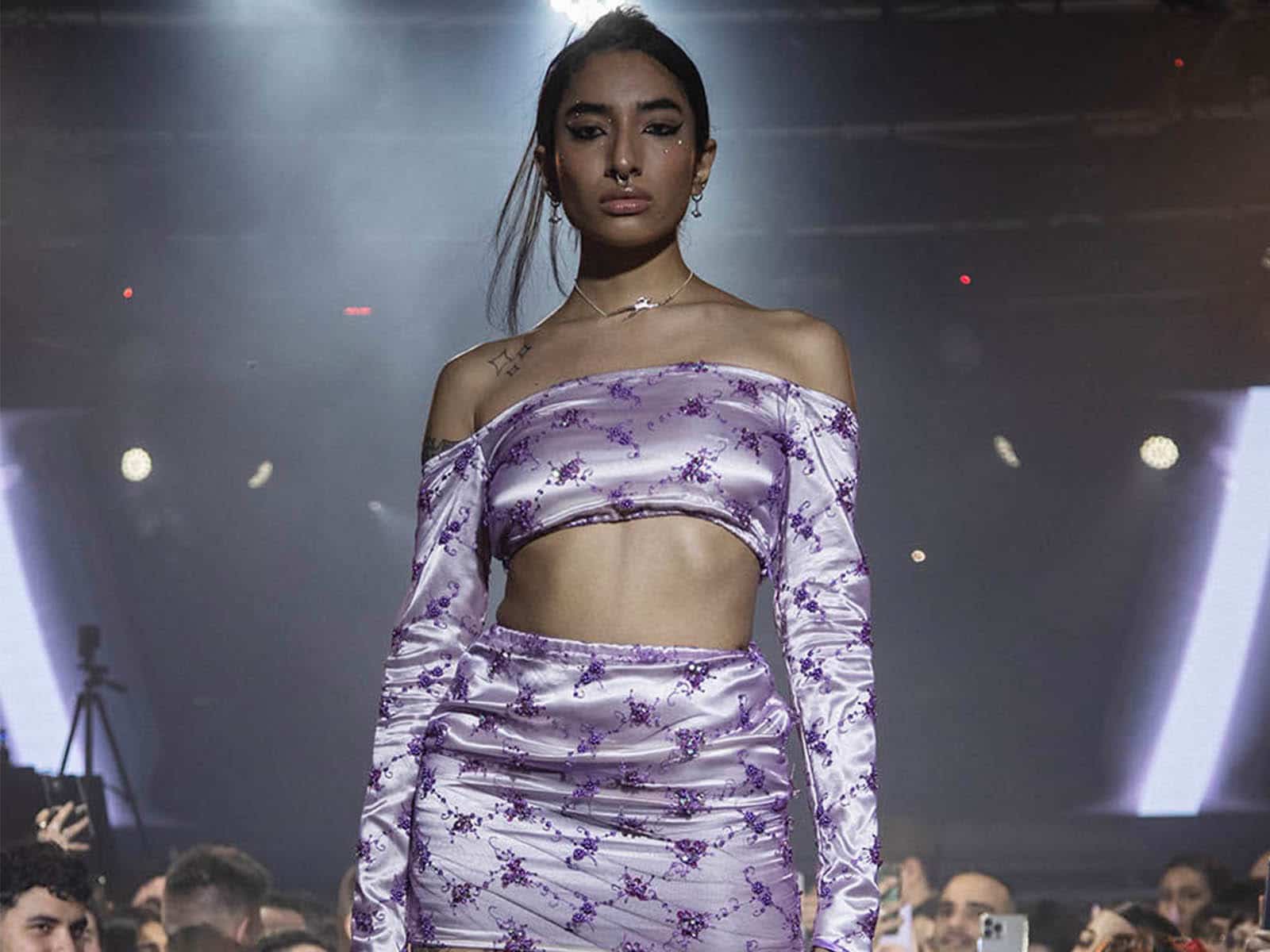 The word zenith literally means way over the head and in astronomy, it refers to the intersection of the vertical of a place or observer and the celestial sphere, being the highest point in the sky in relation to these. It is also understood as the culminating point or the moment of apogee of someone or something.

Thousands of years ago, between the Late Bronze Age and the early Iron Age, a civilisation arose in the southwest of the Iberian Peninsula (Seville, Cadiz and Huelva), known today as Tartessos. Its origin, the reasons for its disappearance and its history are shrouded in myth and mystery.

Only the echoes of ancient voices narrating the exploits of a prosperous and warlike people have reached us. Science doubted their existence, until a treasure was found in Seville’s Aljarafe, opening a door to their world. An elusive world surrounded by legends, including that their story was the inspiration for Plato’s Atlantis.

They worshipped the goddess Astarte, a deity who represents the cycle of life and death, nature, fertility and also war. She is the figure embodied by the woman Cherry Massia in ‘Zenith’. An ode to warrior femininity, to the dual power of nature as creator and destroyer and a reflection on today’s society. 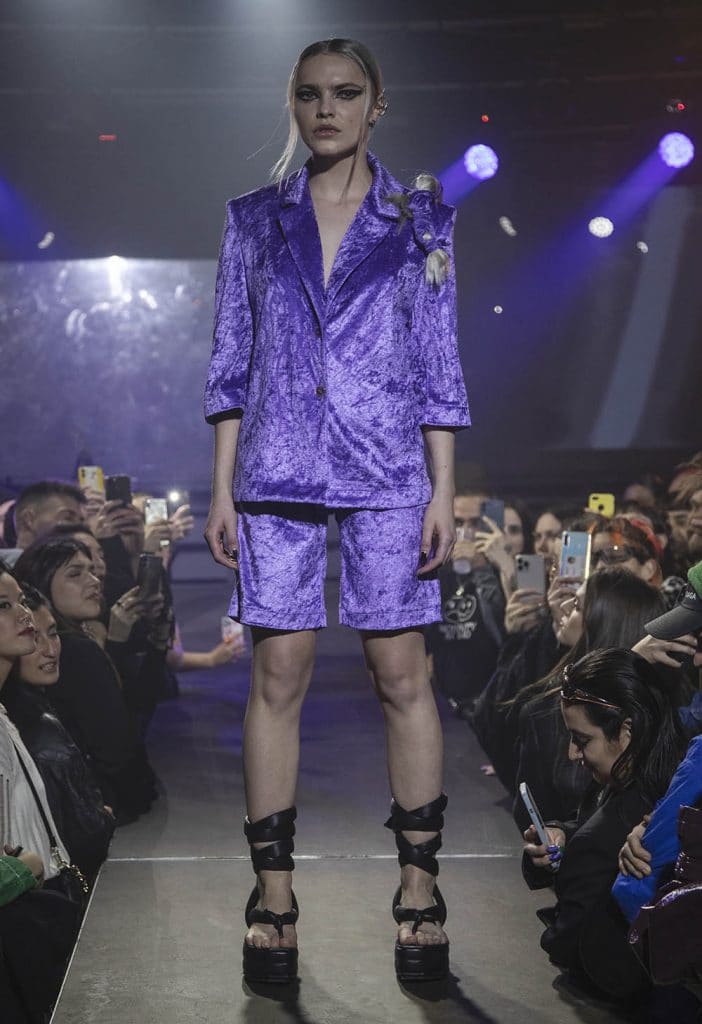 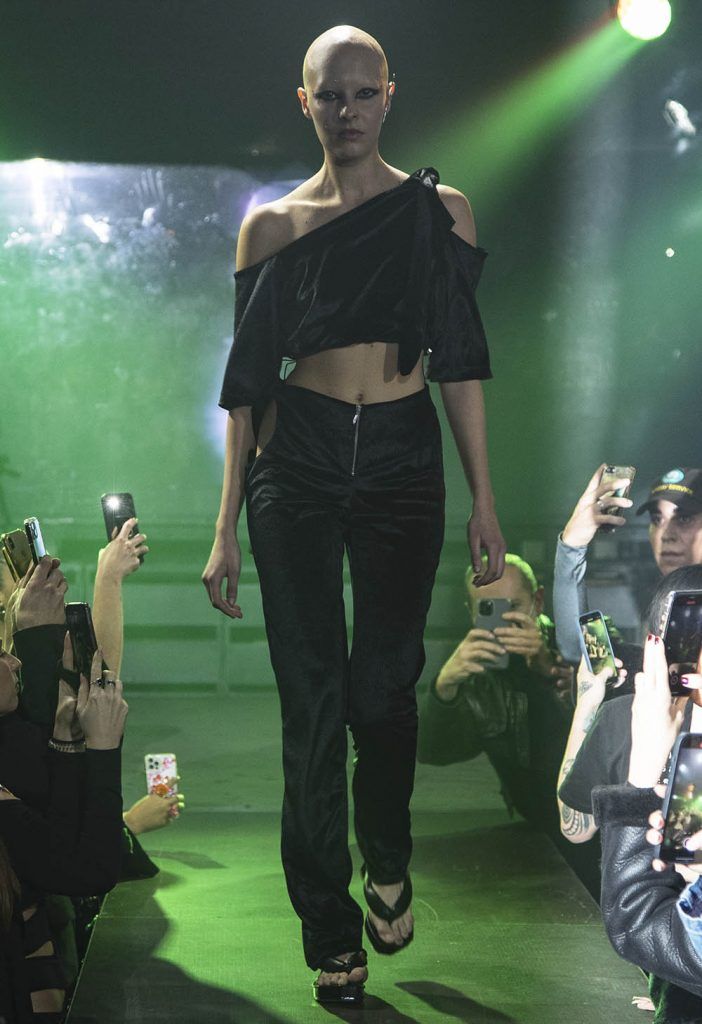 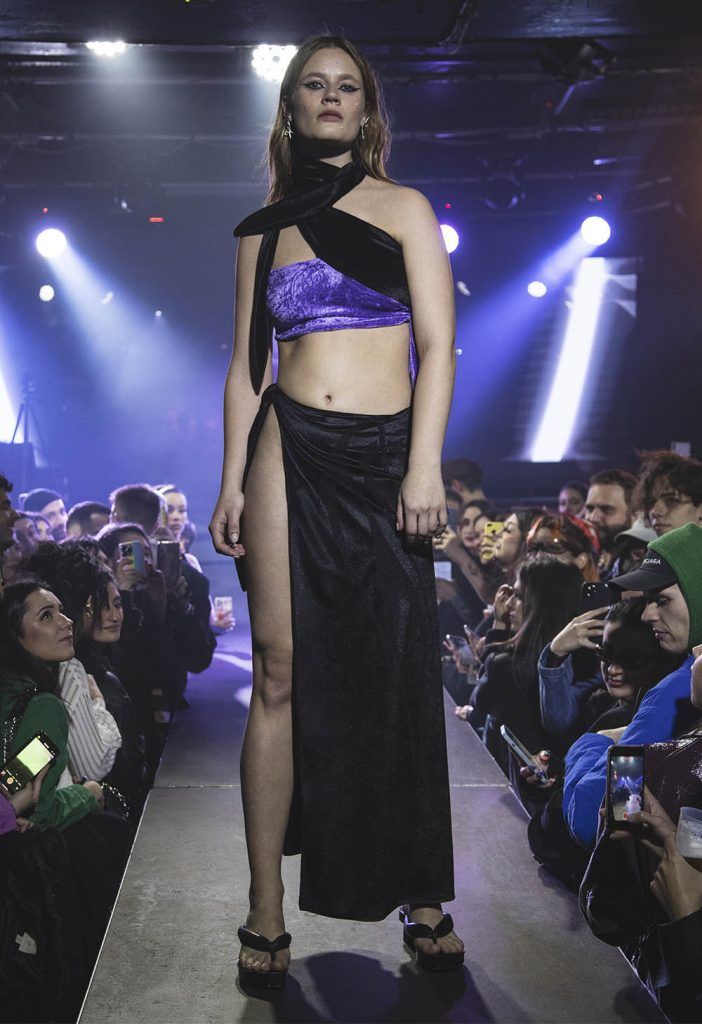 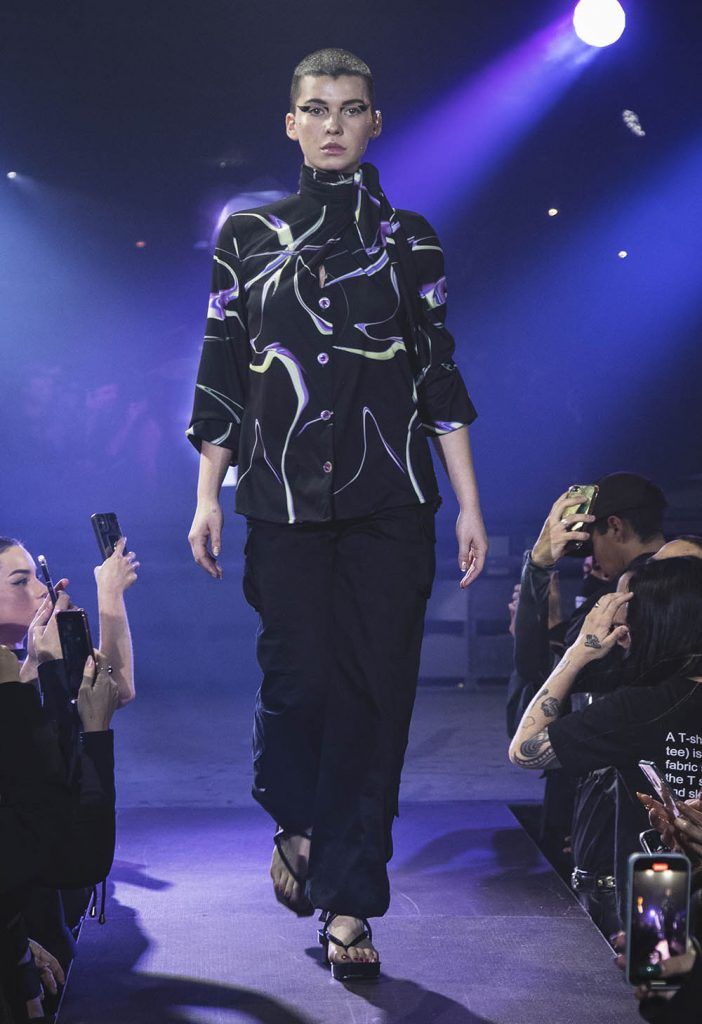 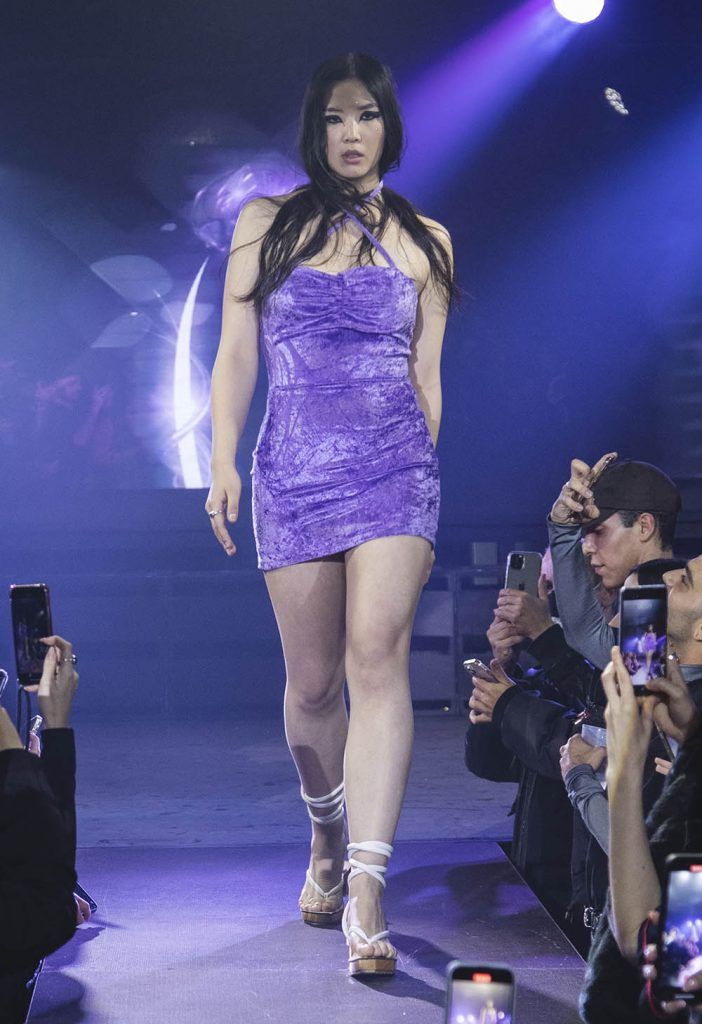 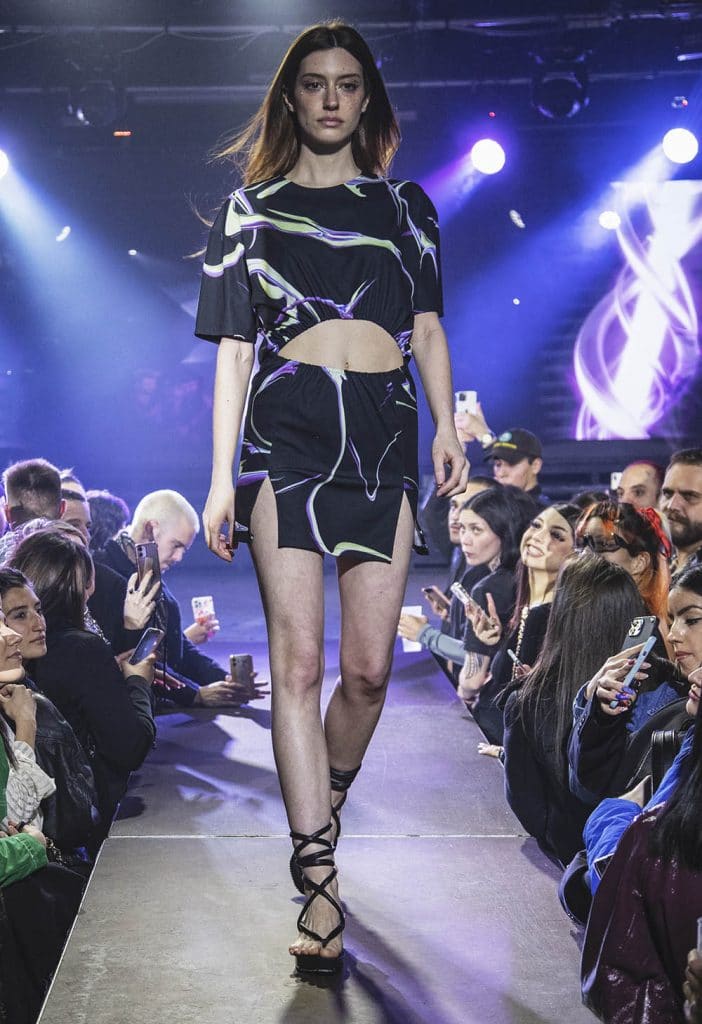 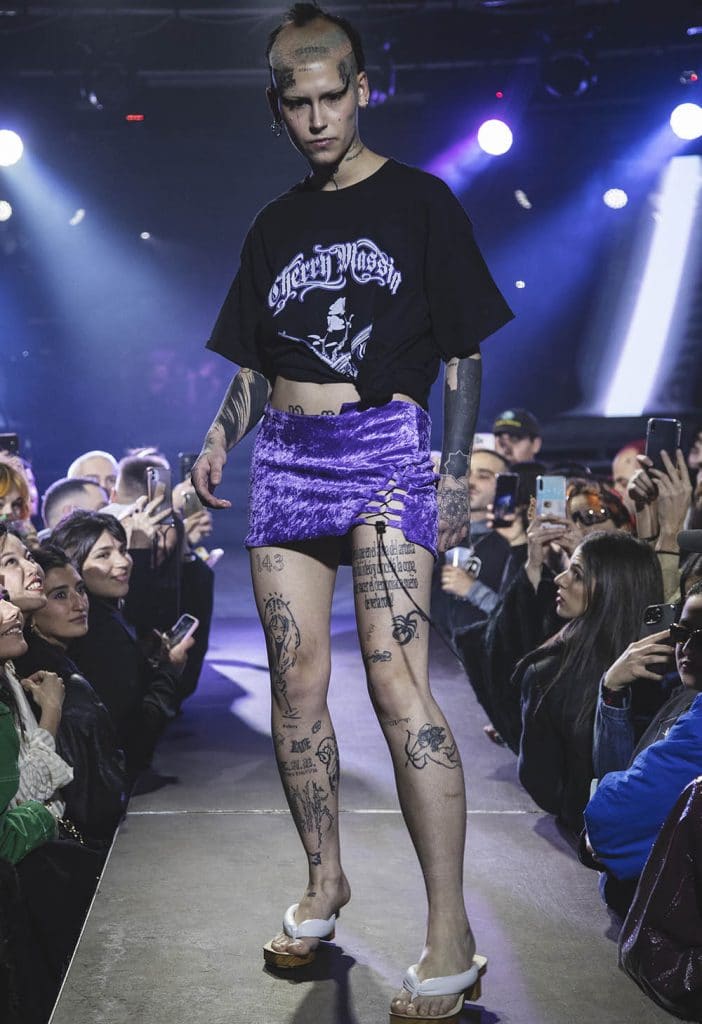 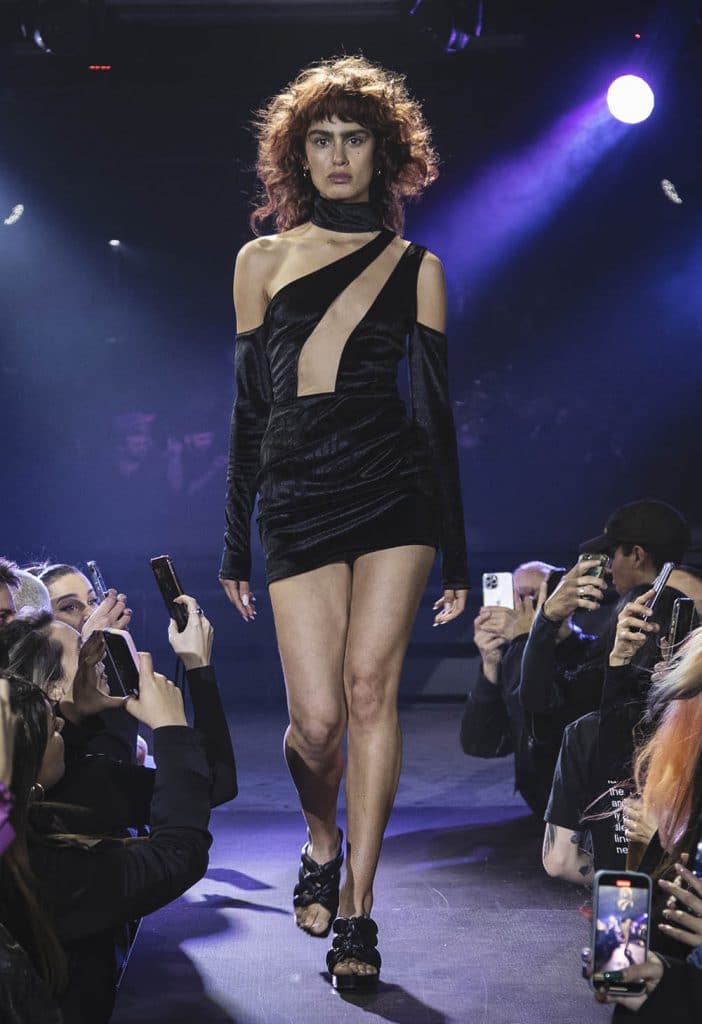 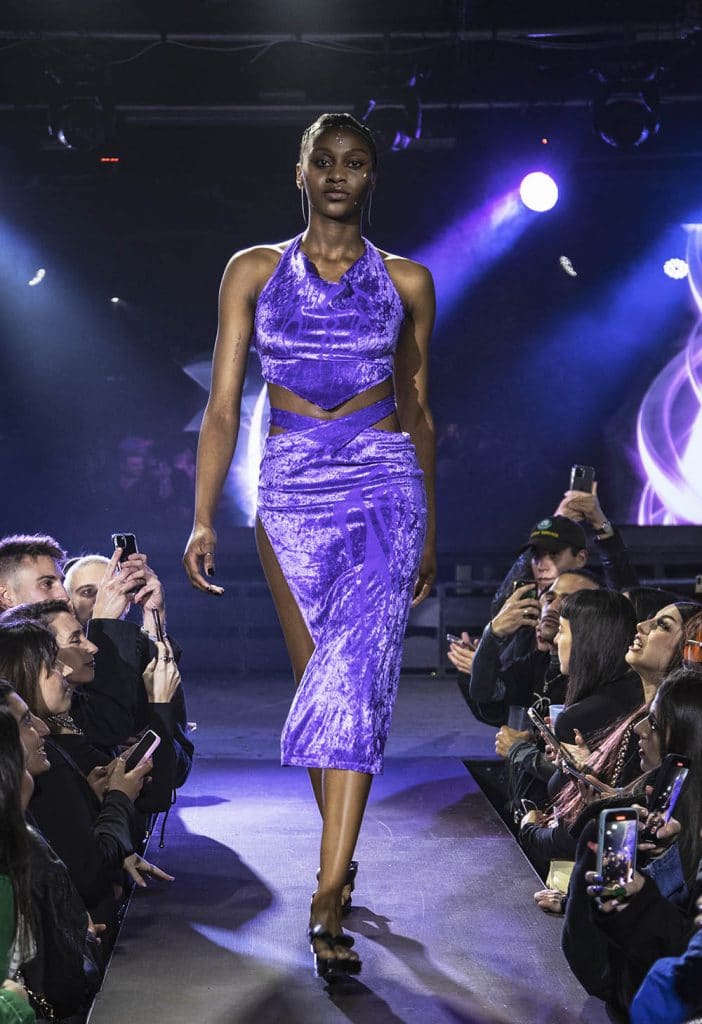 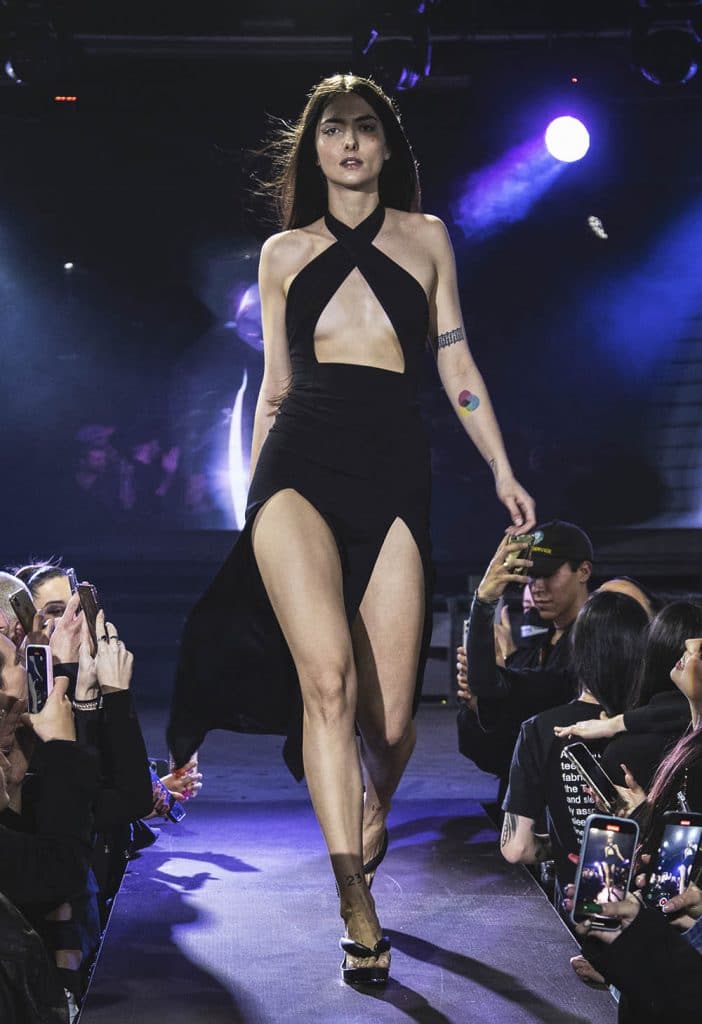 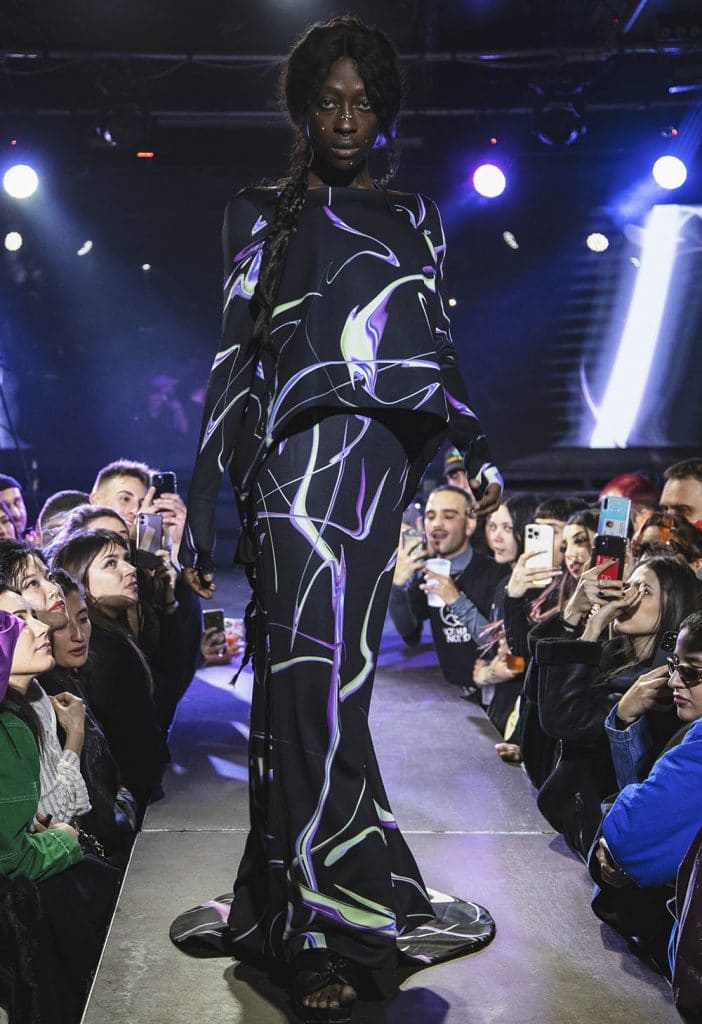 With a generation increasingly aware of the need to reject a system that does not sustain itself and struggling to find a just place in the world, today more than ever, we must choose between rebirth or collapse. Zenith’ depicts a heroine whose journey to the mountaintop comes to an end, rising from the ashes like a phoenix, tenacious and calm, high in the sky.

The colour palette of the fabrics in the collection, the vast majority of which come from remnants of stock, is made up of three main shades and a secondary one. Black represents the occult, the mysterious, power, solemnity and white represents purity, ancient wisdom and peace. Violet is associated with magic, femininity, wisdom and spirituality. To a lesser extent, green appears, conveying hope, evolution, progress and harmony.

The print, composed of abstract shapes generated through an algorithm, is the work of Rafa Yuste @rafayuste, creative director and visual artist who has collaborated with the designer hand in hand, creating a kind of artificial nature, symbolising the union between the technological and the artisanal, the digital and the spiritual and femininity and nature.

In collaboration with Jeanologia @jeanologia, which has been responsible for providing its technology and know-how to the project, the image of a phoenix appears laser engraved on velvet garments, using a technique that alludes to the fate of the mythological bird it represents: to burn to be reborn, generating a glossy/matte contrast that stands out on skirts with side slits, tight-fitting cut-out silhouettes and adaptable garments with loops.

To present this collection, the designer has chosen to celebrate with all the friends of the firm by parading last Thursday, March 17th at 2x20ac @2x20ac, a new concept of art club conceived as a meeting point between different generations of artists, which vindicates the importance of nightlife as an essential element in the artistic dissemination of the capital. 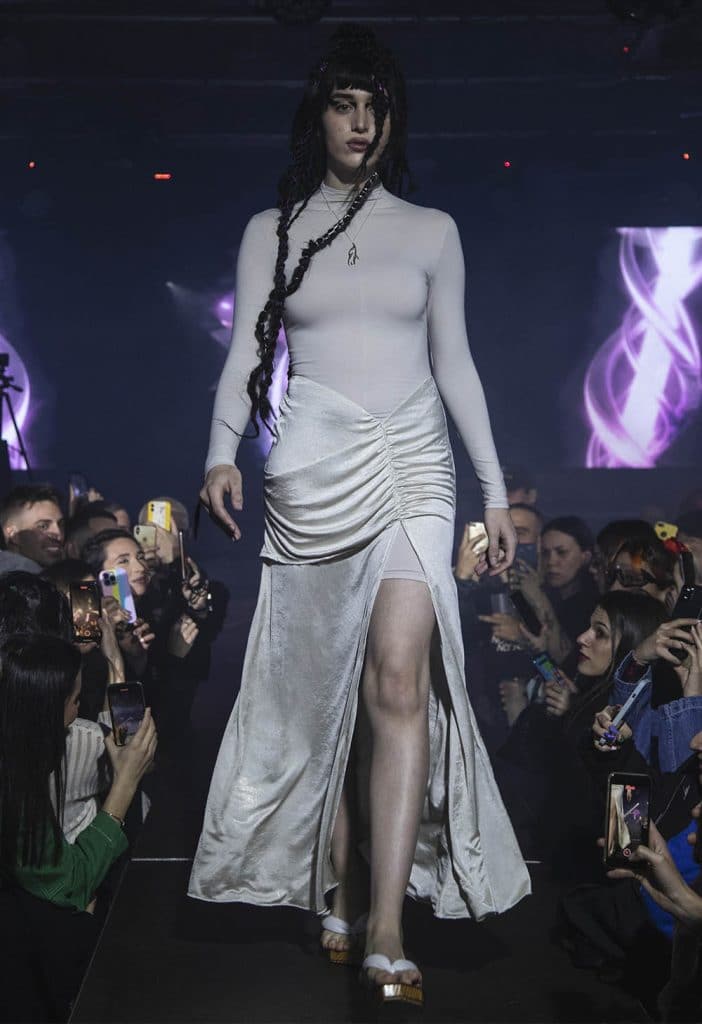 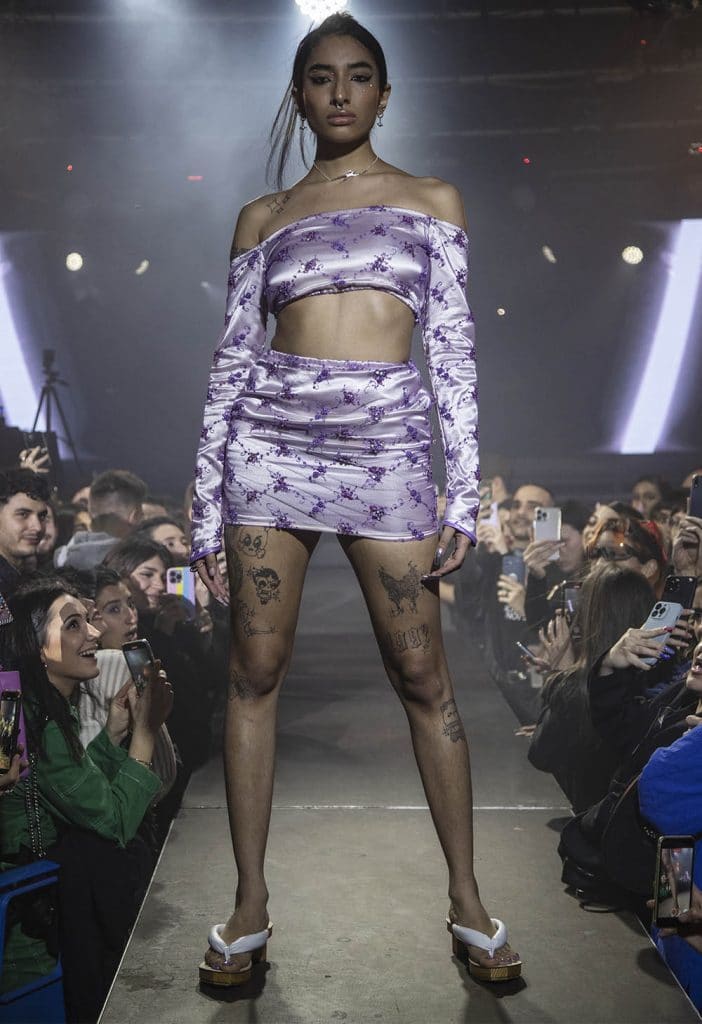 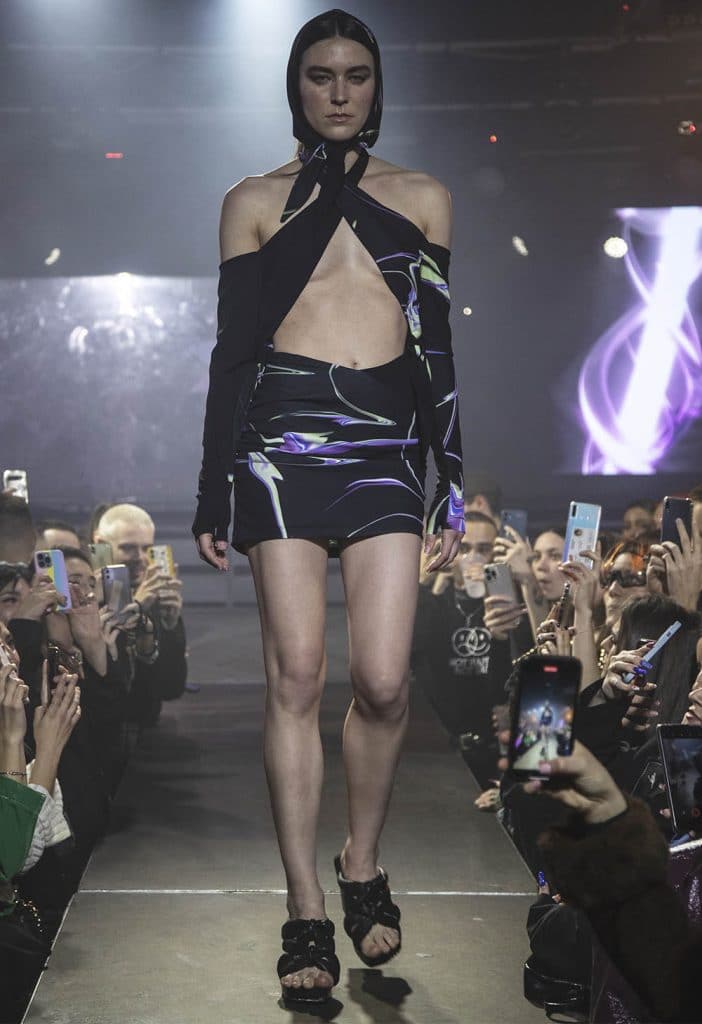 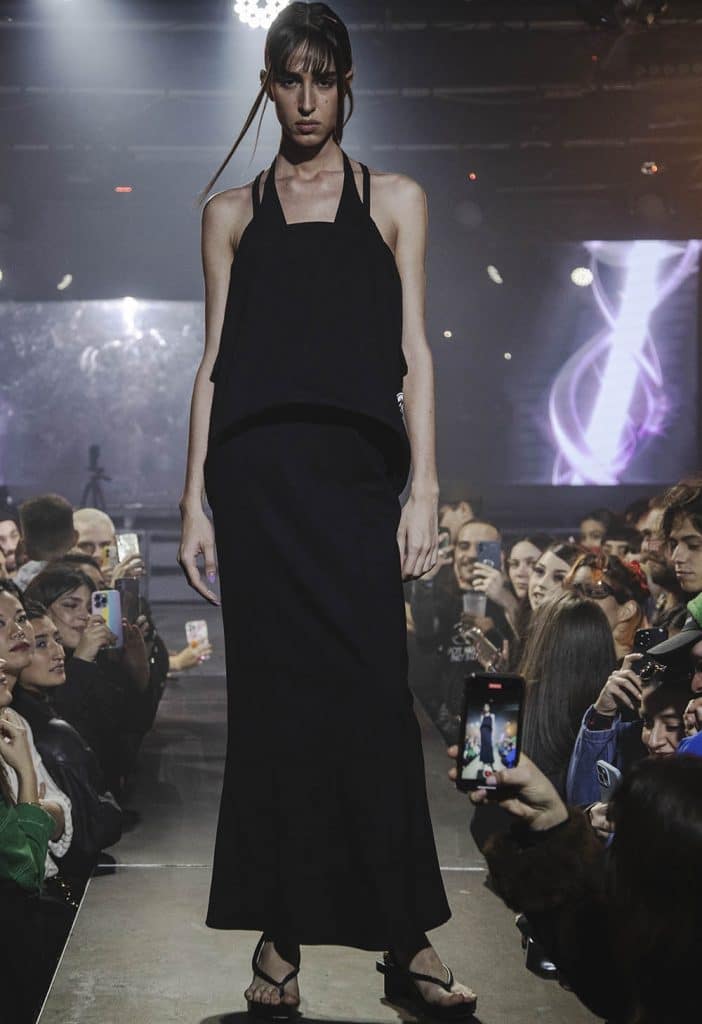 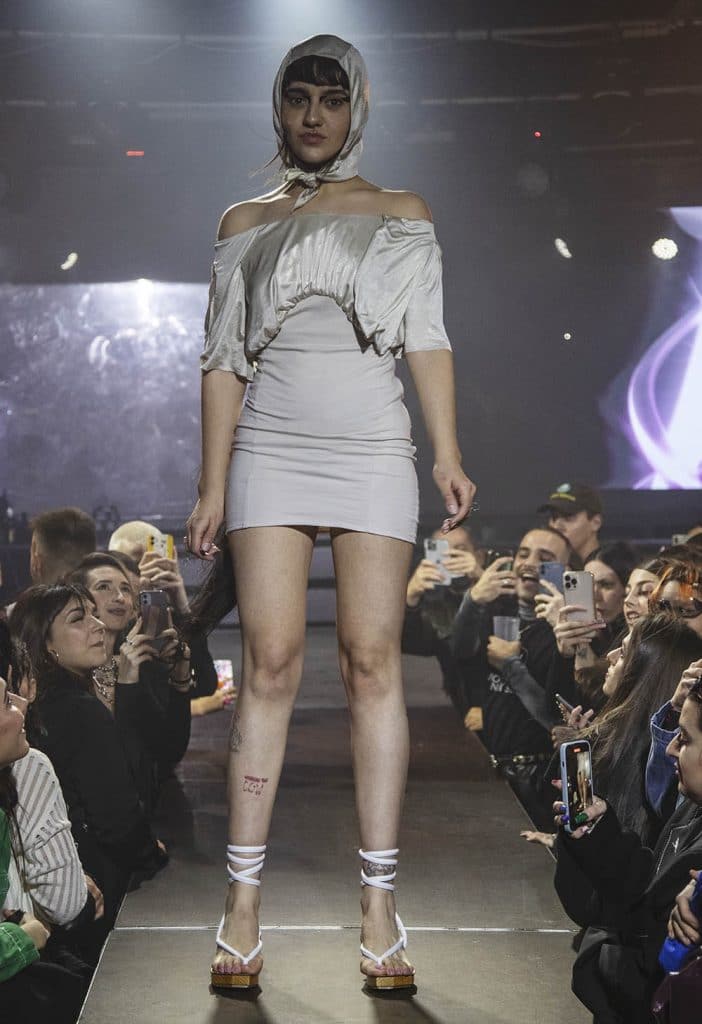 Throughout the night we could listen to dj sets by Kamala @kamala_sutra, Bakuto @bakuto_ b2B Brunorfa @brunorfa, Trixytricks @trixytricks b2B Cute aggression @cuteagression, K4rn3 Kultur3 @karnekulture, Valentina Izumi @valentinaizumi and the live performance of Lian Faz @lianfaz and artists such as Iván Krystal @ivankrystall, who was also in charge of making a 3D piece for the visuals of the show or E1000 @e1000__.

The footwear firm Sandra Moss @sandramossofficial, which combines the contemporary with a demanding design without leaving behind the know-how of the past, joined the show by lending their sandal designs. In addition, the jewellery of Ana Albert @_analbert, whose pieces revolve around decontextualising the sharp and aggressive forms of tribal, taking them to a gentler and more fluid side, complemented Cherry Massia’s garments to perfection.