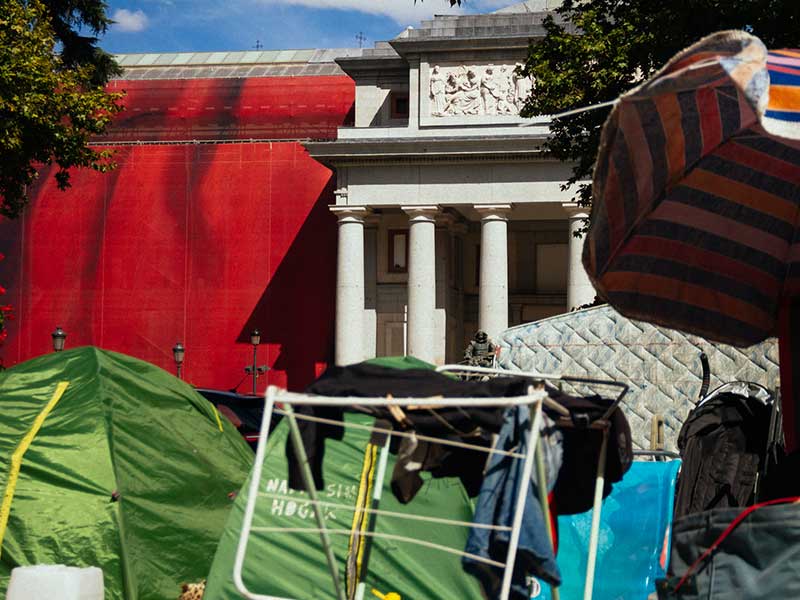 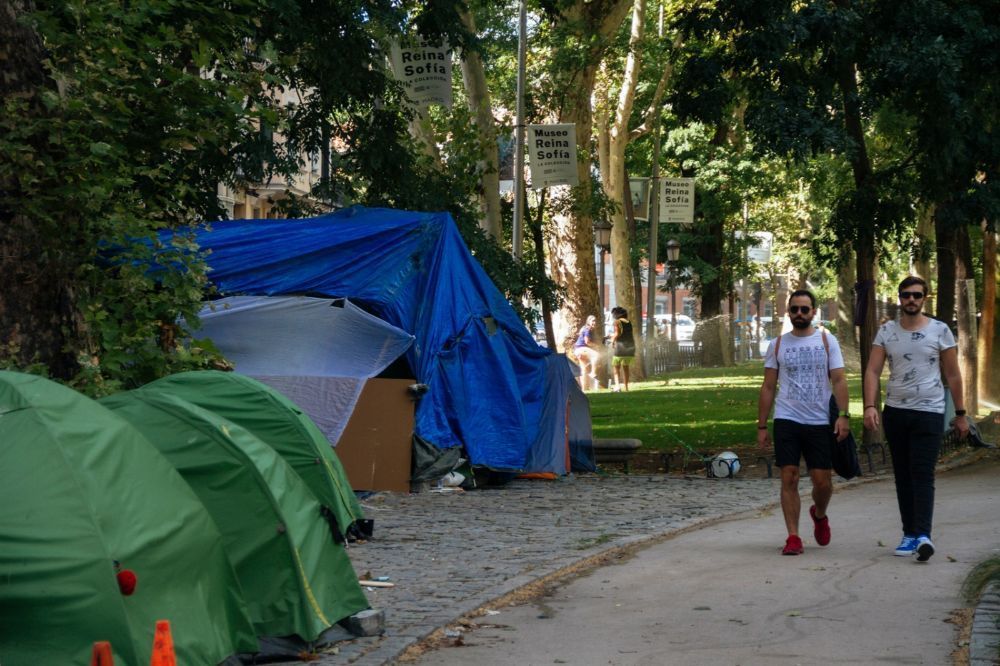 “They’re waiting for us to kill ourselves and, worst of all, they’re right”

4-minute walk from the Prado Museum, a 5-minute walk from the Thyssen and Reina Sofia, right in the heart of Madrid’s tourist district, there’s a festival-style campsite that looks like a bad Decathlon ad. It’s not fucking funny if you come a little closer. That’s why you don’t get close; right? Well, since you’re probably not going to get close, I’ll show you.

The truth is that I’m the same way. I’ve also jumped over people sleeping in the street. I have also ignored some homeless person. I’ve also thought that the people who are on the street are because they’ve done it wrong in life. Guilty. But I also tell you that many times I’ve really been with the desire to ask: What the hell happened to you, dude? How is the life story of this one or the other one?

Well, that’s what I was thinking about when I told my buddy Pablo that if we stopped by to see why a group of about 200 “homeless” have been living in tents for six months. 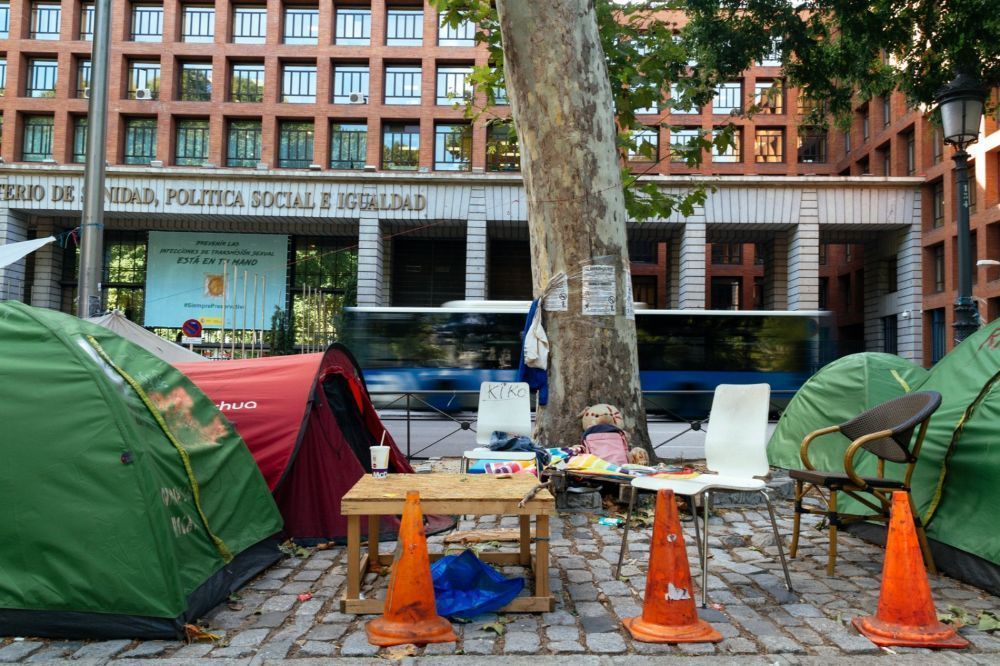 Juan has his shop right in front of the Ministry of Health, Social Policy and Equality. Good postcard. This is the main reason why they have set up the demonstration here. They thought that just like, who knows, some of the people who work in the Ministry of HEALTH, SOCIAL POLICY AND EQUALITY thought of crossing the street and talking to them. Maybe they even decided that they needed help or something. First mistake. Juan is the one who informs about the political reasons for the demonstration and has a more or less learned discourse that obviously begins with a legislative context that people neither knows nor cares about. Art. 47 and 15 of the Constitution. He invites us to sit in his “living room” and apologizes while doing the laundry in two garbage bins.

“They use us for what they want. We are a business.
Cáritas, Samur Social, the priest Antonio… they all live from this”

The truth; I love that he doesn’t inhibit anything. It is not a demonstration for a political cause. It’s a manifestation of people who is fucked up. They have no home, no job, no family (in many cases), no health (in its different forms). They have few weapons left. They are the last. They are the disinherited from the welfare state. We were talking to Juan for about forty minutes in which he told us everything:

“Here they send us what they don’t want anywhere.”

“Go to a village? Why don’t all the people from villages leave. I have 5 generations in Madrid”

“The street kills in many ways”

“All the entities are looking for you to have a problem (in addition to being on the street) in order to be able to take advantage of you and receive subsidies from the city council, the State, Europe…” 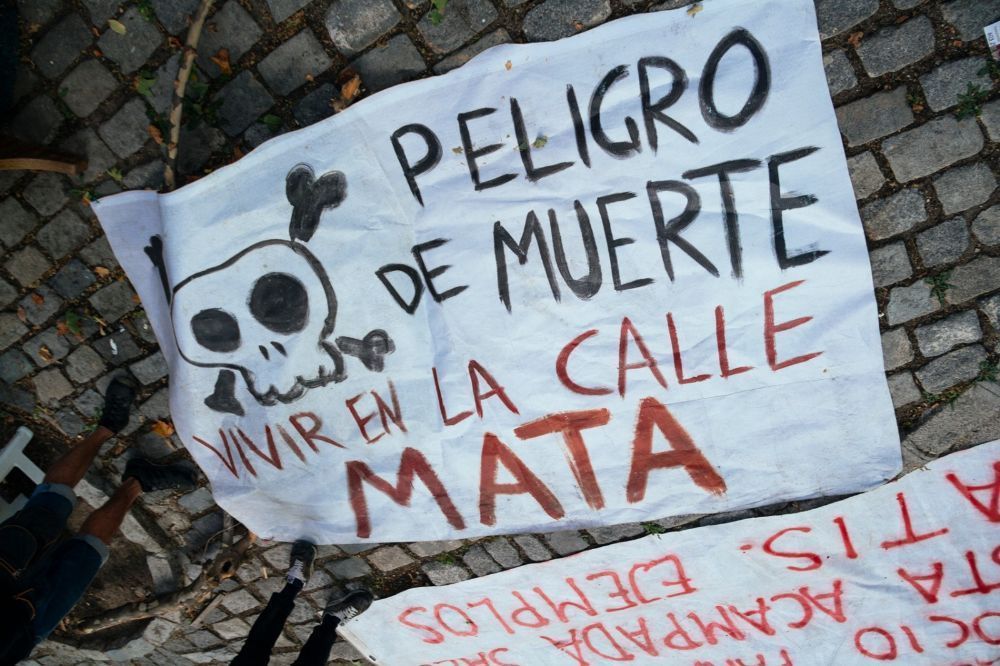 Apparently, everyone here is benefiting but them. NGOs, associations, priests, city council, media, activists… Keep in mind the name of Miki Carrera. You will see it in all the news. Juan tells me:

“Miki is receiving unemployment. He has political ambitions with this”

He tells me that being on the street is a fucking job. It means that the resources are assembled in such a way that for having breakfast you have to move to a part of the city. From that breakfast you get thrown out and you have to get enough money to be able to go eat somewhere else. From that, to the street; to continue looking for money. Etc. Etc. Also, in the street you become an illegal person. Everything you do is illegal. Sleeping on the street is illegal. Begging, looking in the garbage, showering in sprinklers… all illegal. People who see you on the street will never hire you. Your family won’t visit you. Your friends don’t want to see you. That’s what the street kills you in so many ways.

When Juan and I get to this point of trust, I leave the notebook on his chipboard table and ask him if he thinks this has served any purpose. He says directly, “It didn’t work”. And holy fuck, you know what? I think he’s right. I confess him that this looks like “someone” is waiting for them to get fed up. Nobody cares that they’re there. That they’re just one more attraction of the city. And I also tell him that they are waiting for the cold to come so that they can leave on their own.

The conversation goes on a bit and I tell him that if we can talk to someone else. We go up to Cibeles and he introduces us to Elo, Cristian and Bel. It gets a little more turbid when Elo’s couple appears and tells us clearly: 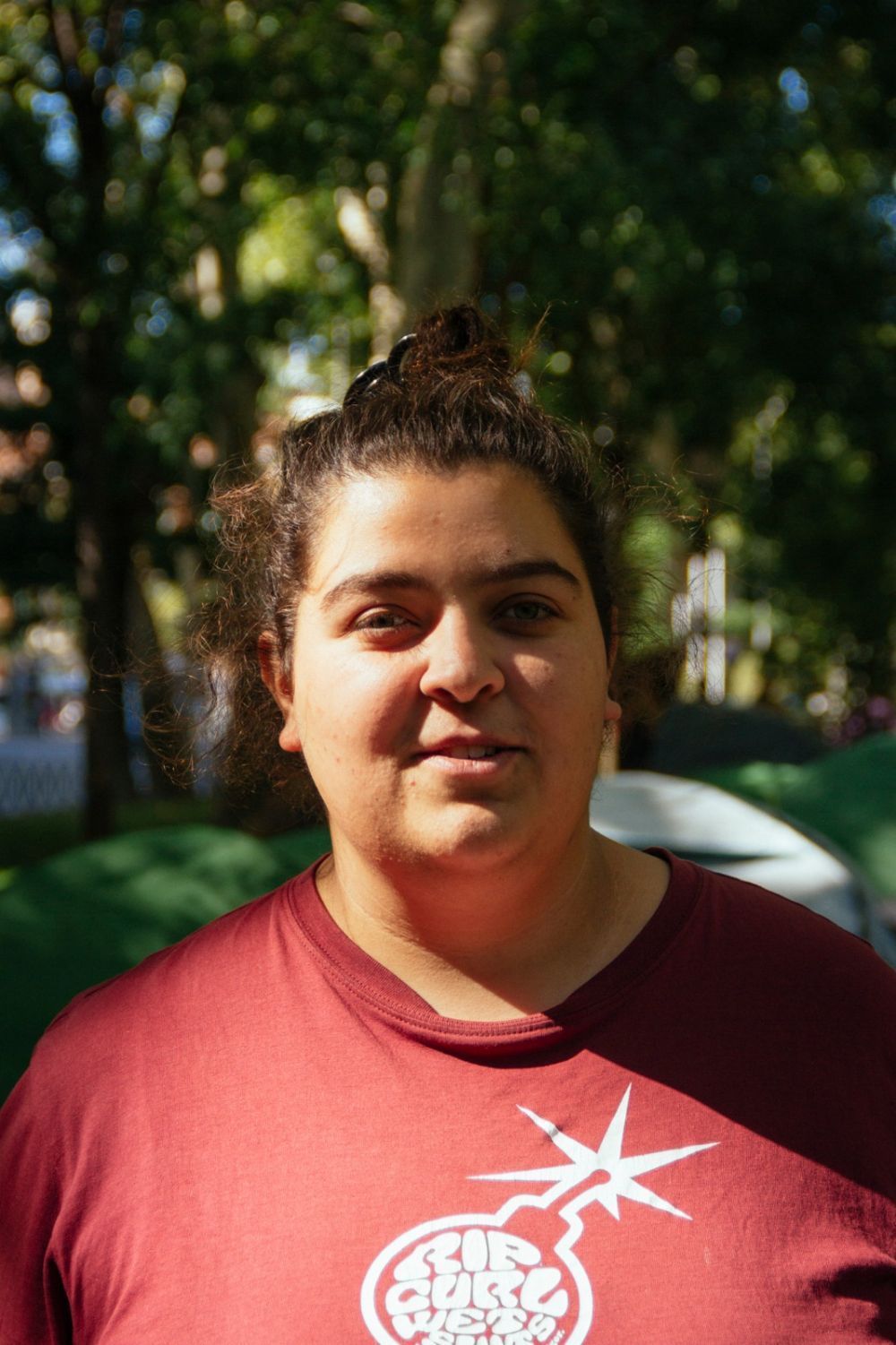 “I’m not spending the winter here. I’m not going to die here like that guy”

They take us to a tree where there’s news of a guy who died camping here. The truth is that neither Elo, Cristian, nor Bel seem to want to talk about it or give it importance. The truth is that, in a selfish way, I don’t want to add more shit to the puddle. Like, these people’s issues are starting to become hard for me. What a fucking asshole I am. I admit it. The truth is that seeing Cristian and Bel blows my head off a bit. They are about 19/20 years old and I swear to you that they have nothing different, at first sight, to most of the people you can know if you belong, or have belonged, to the Spanish middle class. The first thing Cristian tells me is that they are not living there, that they are “surviving”, and he presents to me a scene even further away from a social struggle or a demonstration than the one Juan had told me. He tells me that there are people of all kinds there, with mental problems, with addictions, etc. that make living together rough. That in the street there are people who are very fucked up and that is so hard. And well, they are there because they don’t know where to be. Bel takes a long time to speak, but he speaks quite clearly:

“The family doesn’t help you. It tells you to squat”

If you keep reading you will see that this shit is not dynamic and fun. It is certainly repetitive and boring. Sad. Go fuck yourself. I’m sorry, but fuck yourself. It’s all there is to it. I can’t tell you anything else. It is what it is. The truth is that I’m about to stop this. In my head I can’t stop thinking that I have enough material to write something. That I already have photos. That it’s not cool to stand there, in someone’s life, as if I was in an exhibition. And damn, that they were all fucked up and I didn’t see a fucking way to solve their problems and that was overwhelming me and making me feel bad and that I wanted to go. I’m definitely trash. This is where Diego comes in.

I could tell you Diego’s whole story, but I won’t. Also, at this point this will be long enough for the previous scroll to have kicked out 70% of the people who have clicked on this news. The other 30% will be gone after the first paragraph. I’m surely alone by now. That’s why I’m not going to write nothing more about the story of Diego, who was a maitre, a fishmonger, who is 21 years old, who is gay and that has made him being mocked for much of his life, who lost almost all his teeth due to an infection and has no money for other teeth and since he has no teeth nobody hires him. I’ll take his best line: 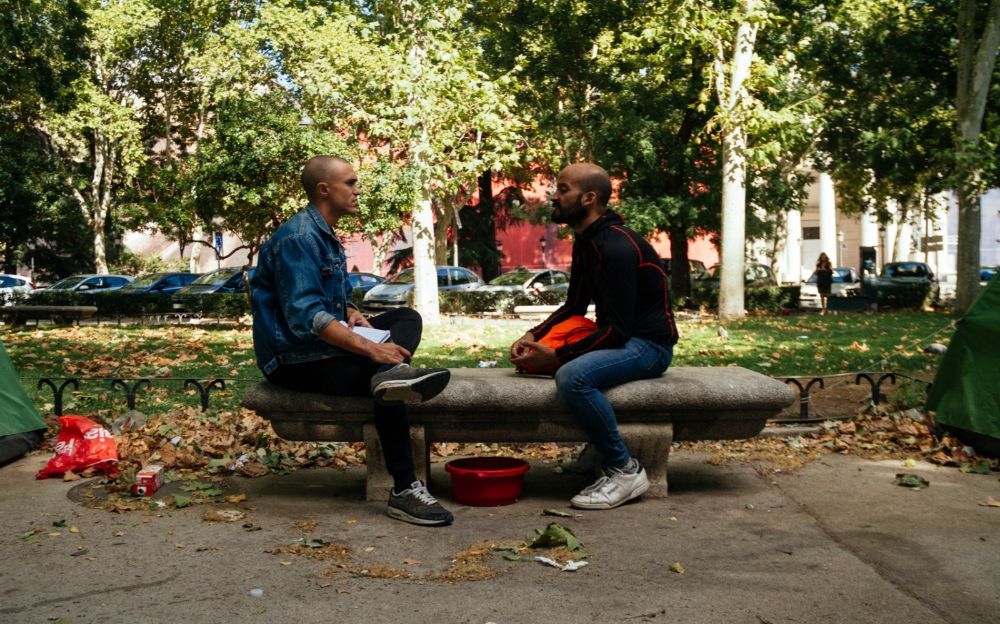 I imagine that what’s going to happen is that they’ll stay there until the weather changes. Until the rain comes back. Until the cold starts. And some will begin to leave alone. Others will go by ambulance. And when there are few left, the police will throw them out of there at an hour in which only taxis pass in Paseo del Prado. Without TV. Without photos. Without Miki. Without me. Without no one. And one day everything will be back to the way it was six months ago. And it will be a cold, rainy day when I will be doing whatever I’ll do, just like you. And Juan and Elo and Cristian and Diego and Bel will be with their homeless routine. They’ll still be in the homeless city.